Will Harmon is an East Coast veteran with roots in North Carolina and Boston that’s been living in San Francisco for the last few years. He’s been consistantly getting coverage in magazines and videos for the last decade while traveling the world and having fun. He does so because that’s what Will wants to do, not because someone is paying him. Will recently showed us a new spot in SoMa and did an interview covering his history in skateboarding. Needless to say, it was a win-win day.

48 Blocks: Let’s start with the early days, you’re from North Carolina; where did you live out there and how did you get into skating?
Will: Yeah, I grew up in North Carolina pretty much. I started skating at the end of the eighties. These kids down the street from my house had skateboards and I used to hang out with them. I was like, “oh man that looks like fun, just to go off a curb and land on four wheels.” I wanted to learn how to do that and I learned how… then I sold all my GI Joes and got my first skateboard. I was like twelve.
48 Blocks: Did you meet Kenny Hughes and Lennie Kirk in North Carolina?
Will: I met Kenny when I was probably like thirteen or fourteen, we’d go down to Carolina Beach… they had this skate park called the Warehouse. Kenny and Chet Childress skated there, that’s how I met those guys. I met Lennie later, he was probably my same age or a year younger. He was just this wild kid that would jump everything, like the biggest double sets and gaps… he would always take it one step further.
48 Blocks: So after North Carolina you lived in Boston?

Will: Yeah, I moved to Boston just after high school. Everyone was like, “did you move there for school?” I was like, “nah, I just like the scene there to skate and stuff.” The scene was really good in Boston in ’96 when I moved. It was in all the Thrasher videos, Satva used to come there every summer.
48 Blocks: Did you see PJ Ladd and Gallant back then, who were the dudes that were putting it down at that time?
Will: When I first moved there it was like Jahmal Williams, Panama Dan, Charlie Wilkens, Robbie Gangemi, all those guys were the main dudes. PJ and all those guys didn’t really come around ’til the new millennium.
48 Blocks: 2000
Will: Yeah, 2000, 200, 2002. I used to skate for Converse and Ryan went on this tour with us and he started blowing up. He was in this 411 and people started to really know who he was.
48 Blocks: So, where did you move after that, Cali?
Will: Yeah, I moved to SF in 2003. In winter 2003, so I’ve been here for three years now.
48 Blocks: What brought you out here?
Will: I used to come out here every winter for the past ten years. I’d stay with either Cairo and Elias or my friend Pete or Kyle and Shawn. I’d come out every winter and stay for a month to get out of the East Coast cold. I had just been in Boston for too long and felt like I needed a change.
48 Blocks: You’ve been getting coverage for a long time. Who was your first sponsor and how did that happen for you? 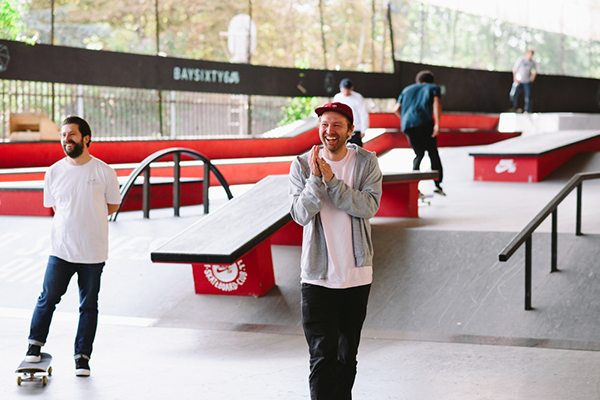 Will: I rode for this company called Channel One, which is Mary Jiminez’s old company… the Jinx, you know. At the skate shop Endless Grind, this guy JD was the manager there and he used to work for those guys. My friend Chet rode for Acme at the time, a couple people put in good words and I sent them footage. Then I came out to California and started getting some photos in magazines and they were hyped and put me on.
48 Blocks: From there what’s the timeline?
Will: Oh man (laughs)
48 Blocks: Too many to name?
Will: I don’t know, I rode for a bunch of board companies and shoe companies. So many…
48 Blocks: Are you filming for anything right now?
Will: I’ve got some footage coming out in this Adidas promo.
48 Blocks: Tight, did you hook that up through Bryce?
Will: Yeah, pretty much through Bryce. I was already kinda getting shoes a little bit before Bryce was TM, but then he became TM. I’ve known Bryce since back in the day, and then I showed him some footage.
48 Blocks: I know you’re going to school right now too, what are you studying?
Will: I’m taking a bunch of classes, I took English, Philosophy, Political Science, Marketing… just trying to figure out what else I want to learn. I haven’t decided a major or anything like that.
48 Blocks: Do you have any ideas about what you wanna do?
Will: Yeah, I have some ideas but I don’t wanna call it out right now. I know things that I don’t wanna do and other things that interest me.
48 Blocks: You travel around quite a bit. You’ll be out here in the city for awhile then you’ll bounce out and pop back up. How do you work that out? Most people seem to get tied to a place. 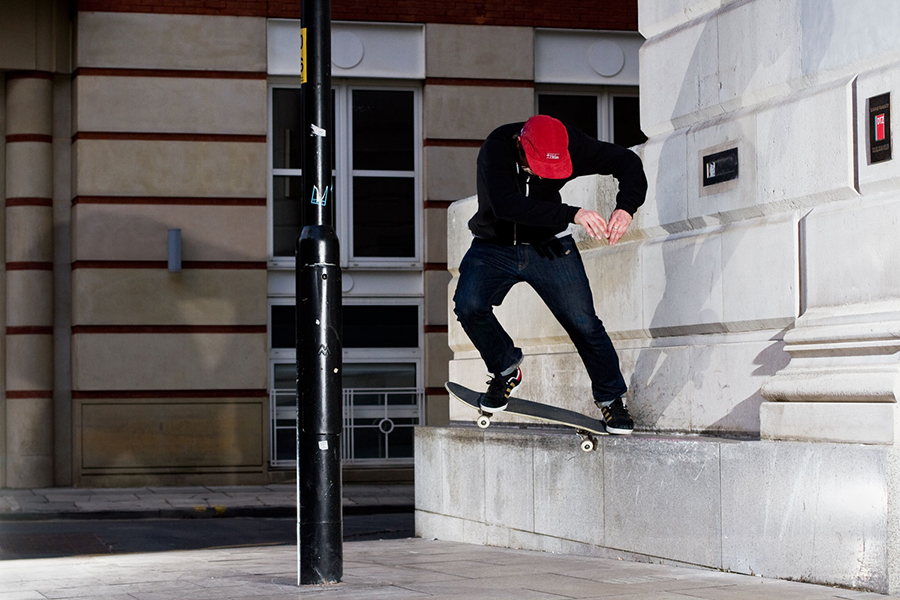 Will: I don’t know, I guess I’m not scared to move around. Some people get used to being somewhere and just stay there forever, but I like to move around. I’ve lived in Boston, I’ve lived out here… you gotta travel man. I just have to do it, if I don’t travel and stay around too much I go crazy.
48 Blocks: You got any trips planned right now?
Will: I’m saving my money right now for the next trip. I was in London for two months this summer and spent so much money, I’m just now recovering.
48 Blocks: Where have you been skating lately?
Will: 3rd and Army and the mini ramp. It hasn’t been that exciting lately, this spot is pretty cool.
48 Blocks: Who have you been skating with?
Will: Danny Gotimer since he got back. Ben, Shawn Connolly a couple times, Nikhil, Goto, and Matt Jones.
48 Blocks: When you were a kid, what influenced your skating? What videos did you watch, what companies did you pay attention to? 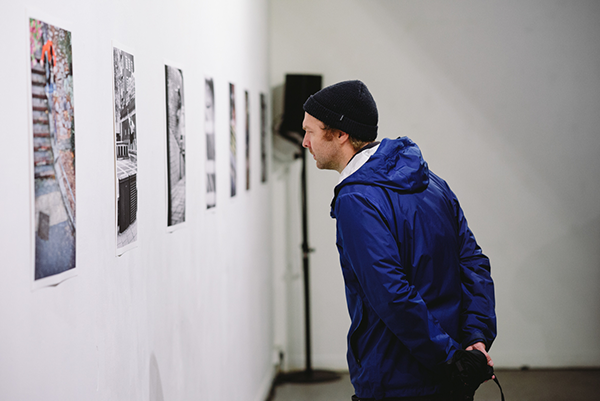 Will: Pretty much East Coast companies, well early early on I remember seeing Ban This and Frankie Hill’s part. I was so hyped on that, he would jump on everything and jump on rails. I used to be pretty into rails and all that stuff, but I think it gets kind of old after awhile… and maybe you get older after awhile. Then the whole big East Coast surge of the mid 90’s was really sick.
48 Blocks: Eastern Exposure.
Will: Yeah all that, we used to go up to Philly a lot. That was a really good time back then, even later when EST was going on… that was pretty cool.
48 Blocks: Do you have a favorite city?
Will: I don’t know, a lot of cities that I’ve skated in have been amazing, Barcelona obviously. London, I have a really good time in London. I think people think it’s always rainy there and there’s no spots, but I think people are gonna realize that it’s a pretty sick place to skate. San Francisco has it’s good and bad months. It seems like it goes in cycles here, a new spot will pop up and everyone is out shredding then a month will go by and no one is skating. It just goes back and fourth here.
48 Blocks: What do you like to do when you’re not skating?
Will: Sit at home on the computer, I don’t know. Just hang out with friends, go to the local bars and shoot some pool or something. I was trying to read for a bit, usually in school I don’t have any time to read for myself. I work at Huf a lot so I don’t have too much free time.
48 Blocks: Being that you work at Huf, are you into the whole shoe game?
Will: Yes and no, I pay attention to it more, but at the end of the day they are just sneakers and you should just wear them and not spend all your money on them and all that. I’ve really slowed down, when I first got the job there I was probably buying a lot; but I don’t really buy too many sneakers any more.
48 Blocks: Are you from that whole East Coast tradition where you gotta have your skate kicks and you gotta have your chill kicks?
Will: Yeah (laughs) Definitely. I learned that… I’ll never forget this, it was one of the first times I was in Philly and first met Stevie. We were all real tired cause we had been skating all day and we were like, “what should we do here while we’re in Philly?” We didn’t know what to do cause it was our first time out there and we said, “maybe we should go to the mall.” Everyone was like, “yeah yeah, lets go to the mall, they got malls in Philly?” I don’t know what we were thinking, we were seventeen or eighteen… I guess you go to the mall at that age. Anyway, Stevie was like, “you’re gonna go to the mall, in THOSE shoes?!” (laughs) It was a completely new concept to us, you had to change your shoes to go to the mall. That was the first time I realized, “ooohhhh, chill shoes.”
48 Blocks: Any advice to kids reading this that are trying to come up in the skateboard world?
Will: Learn how to skate everything. Don’t learn how to jump down handrails and stairs before you know how to slappy a curb. I think kids try to do too much too soon now.