It’s hard to think of Tim Gavin as an industry big wig. I’m not sure if it’s because I still remember watching his video parts on a regular basis, or if it’s because I’m updated regularly on his lunch choices via Crailtap. Whatever it is, I just can’t picture this guy sitting at a desk taking business calls. From top pro to company owner, the Gav has seen it and done it.

Keir: What year did you start skating?

Keir: What are your most vivid memories looking back 20 years ago?

Tim: I remember kids in the neighborhood were skating.I was drawn to it as they were all my friends. I remember the old Powell graphics and ollie airwalks.

Keir: What was the first set-up you scored?

Keir: Nice, the K-Mart special, right? What was the OG spot for you?

Tim: It was Vato Land.

Keir: Who was the first dude you ever saw kill it with your own eyes?

Tim: Randy Colvin, he was someone that was doing tricks that no one could imagine doing. He had amazing style and just looked insanely good on a board.

Keir: What videos had the biggest effect on you?

Keir: Before Blind, who was your first sponsor ever?

Tim: Airbourne, I was put on by Jimi Scott. We used to skate AZ contests a lot and he found me at one of those. After Airbourne, H-Street was the next company that I rode for when my friend Colby Carter put me on.

Keir: You started dropping video clips around this time. What was your first appearance?

Tim: The H-Street video was the first, Hokus Pokus. I was put in a small part with a few other guys. I had two tricks. The music we skated to was original music that Ternasky used. Filming back then was nerve racking, but the sense of accomplishment was very inspirational.

Keir: Your most well-known part arguably was in Pack of Lies, what were those days like when it was you and Henry Sanchez together?

Tim: We skated a lot together along with Guy and Rudy. It was the four of us a lot and probably some of the best days of my life—definitely were actually. We did tours with Blind and Rocco a few times and it was a great experience. It was really fun skating with those guys as we each seemed to push one another. I think some of the best skateboarding ever was during those times in my life.

Keir: How did you get involved with Girl?

Tim: I didn’t have much of a role at all. I remember Jovontae Turner actually called me and put me on without Rick and Mike even knowing. I think Henry was supposed to be on as well, but something happened on tour.

Keir:  How did DVS come about and what does it stand for?

Tim: There is no acronym for DVS. We just liked the way the it sounded and the letter play. It was me and my friend Kevin. He owned a retail shop called 118 in the Valley and he wanted to start a shoe company. I put the marketing together and he funded it. 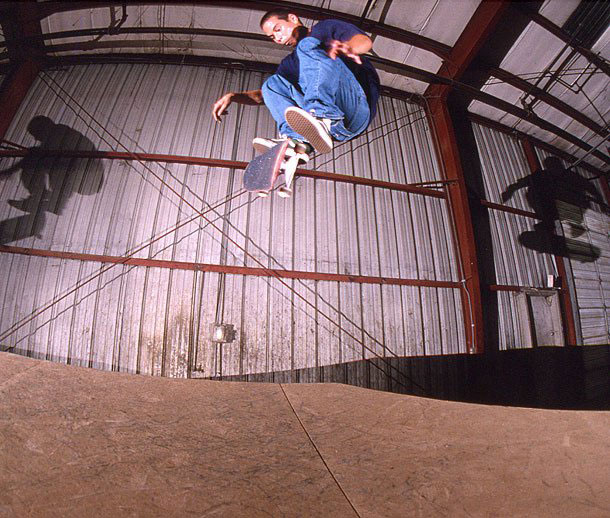 Keir: Sounds so simple, what was it like at the beginning?

Tim: It was nothing but a learning experience. We knew nothing about shoes at the time. All we really knew was what myself and the team liked in skate shoes. It was scary to be in an office as well, a lot to learn, not to mention it was my first real job.

Keir: What would you say is the most important thing you’ve learned from starting DVS?

Tim: I learned how to cope with problems and stay patient. My day to day consists of 190 things at once. Multitasking has become a trait of mine. All in all, my job is to listen to people and take what I learn from them. Our employees are the key to our business.

Keir: How do you feel about the way skateboarding has progressed?

Tim: Skateboarding has definitely lost a lot of personality. I think individuals are turning pro too fast and there are just too many of them.