Steven Cales’ name should be recognized in skateboarding alongside Gino Iannucci, Keenan Milton, and Keith Hufnagel. He came up skating with those guys, has the skill and style, and was pro for some of the best companies of his era. Unfortunately, Steven has a dark side that caused him to get locked up during some key times in his career. It’s really unfortunate that this guy never had a proper video part, and kids today don’t really know who he is. He was definitely one of the best to do it. We recently reconnected with Steven after not speaking to him for about eight or so years, and were finally able to get him on the phone for an interview that we’ve been anticipating since this site began.

48 Blocks: Let’s start off with early New York. Where are you from?

48 Blocks: What year did you start skating? 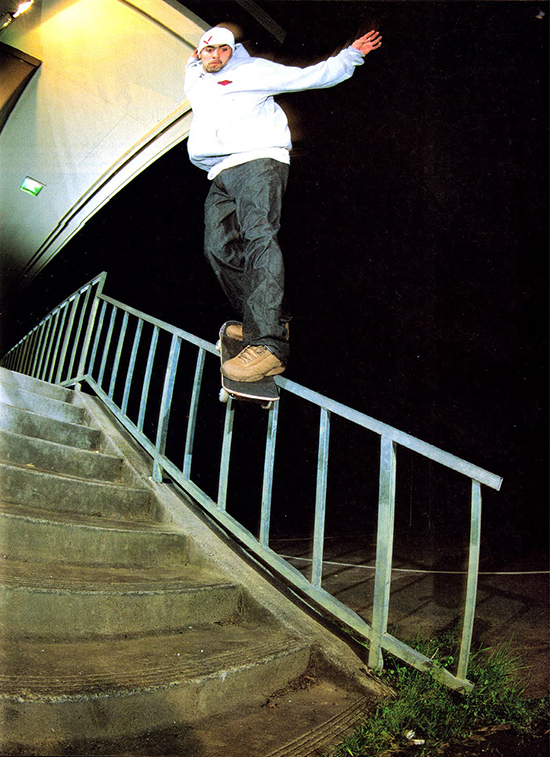 48 Blocks: That was pretty much the SHUT era, right?

Steven: Yeah, SHUT was like the H-Street. They were the H-street of the East Coast. They were really like— quiet as kept, whoever really knows—they were on that same level. If H-Street was around and SHUT was around, It was on. It was a nice little show. Sheffey, Mike Kepper, Brian Blake, Felix Arguelles, even Billy Waldman was killing it too.

48 Blocks: When did you first start going to the Brooklyn Banks, and Downtown?

Steven: I can’t recall what year. But it was early on, late ‘80s. They had contests down there. By then, I was all right. I would enter them, and usually get first or second place in my age group. That was cool.

48 Blocks: How did you first meet Keenan Milton? You guys were tight, and you spoke in the memorial that they had for him at the beginning of Yeah Right.

Steven: We linked up skating in Manhattan. I can’t recall the exact day. But everyone would skate in Manhattan from all the boroughs, and Keenan was from Manhattan. Huf was from Midtown, and he used to skate with Huf a lot. We met from just skating NYC. There were just so many skaters from all over the place.

48 Blocks: Did you meet Gino Iannucci around the same time?

Steven: Gino came into the scene a little later from Long Island. He would come with Ben Liversedge. Those kids ripped. We would skate all around. They opened the door for us to go to Long Island, and hit all the spots up there.

48 Blocks: Who was your first sponsor?

Steven: The order was Blue, they flew me out to California. I started skating Los Feliz. Los Feliz was the home of Fabian [Alomar], Gabriel [Rodriguez], Guy [Mariano], Paulo Diaz, etc. I skated there, and started hanging with those guys. They got me on World. So I left Blue for World, and then I left World for ATM with Mark Gonzales, and they turned me pro.  ATM turned into 60/40. But I was in prison at that time. But I still skated for that. They still paid me. They looked out. Then I went from 60/40 to Menace.

48 Blocks: In the World Industries Box Set bonus, they have all this footage of you skating Embarcadero. What’s the story behind that?

Steven: That footage was actually for Love Child. But I left. So it didn’t get used. I never bothered to get the footage. I didn’t even care. I didn’t use it for anything else. But that time was cool. I had a lot of fun. I had a good experience with World Industries. I had a lot of help from Rodney Mullen. Skating was fun. We had the World Park. Henry [Sanchez]was ripping it. Daewon [Song], Daniel [Castillo], Spencer [Fujimoto], all the SF cats, they were on another level.

48 Blocks: So you were on Menace until it switched to All City. Then, you just kind of disappeared. What was the story behind that?

Steven: The story behind that is my sick thinking. I would try to live a double life. I would be hanging out in the streets with my homeboys, then skating, then going out, and partying too much. It wasn’t working like that. I ended up going to prison. They’re not gonna support somebody that’s in prison. They’re losing money. It’s business.

48 Blocks: So after you got out, I remember hearing this crazy story – I’m not even sure if it’s true—but I heard that you got this photo with Monica Lewinksy and sold it.

Steven: Yeah that’s true. The story is that I was at a bar, and Monica Lewinsky was there. They used to have stars in there. It was in New York. From skating and going out since I was little, I had friends in the party world that would run the doors. We would just walk in. It was cool because they wouldn’t let your average person in there—even though I’m average. Anyway, I was with Peter Bici that day, and he had a camera. I happened to have beef with this kid that was in this party. I was sitting next to this girl Camryn Manheim. She was in The Practice. That was Monica Lewinsky’s friend. They were together. So I go and sit down next to them and Peter snaps the photo. That’s how that photo came out. After that I got up cause the guy I had trouble with came to up me, and we just started fighting. We shut that place down. Everybody was running out. I was fighting. Then, all my other friends were fighting too. They put it in the Daily News, “Monica Lewinsky’s Bar Room Brawl!” E TV and all that shit was there the next day interviewing people. I was scared because I was on parole. I didn’t want to go to the media and be like, “Hey this was because of me.” Anyway, Peter gave me the photo. And I shopped that motherfucker around. I went to Russell Simmons. He had a magazine, but their pay was too low. So I was like, “Nah, I’m out of here.” I flew to California, and went to Keenan’s house. I was skating with Gino, and all them. I went to the National Enquirer. First, I went to Star Magazine. But their pay was kind of cheap. So I was like, “Nah, I’m going to the National Enquirer, last one.” Their pay was all right. So I just sold the picture, got the check, and was happy! 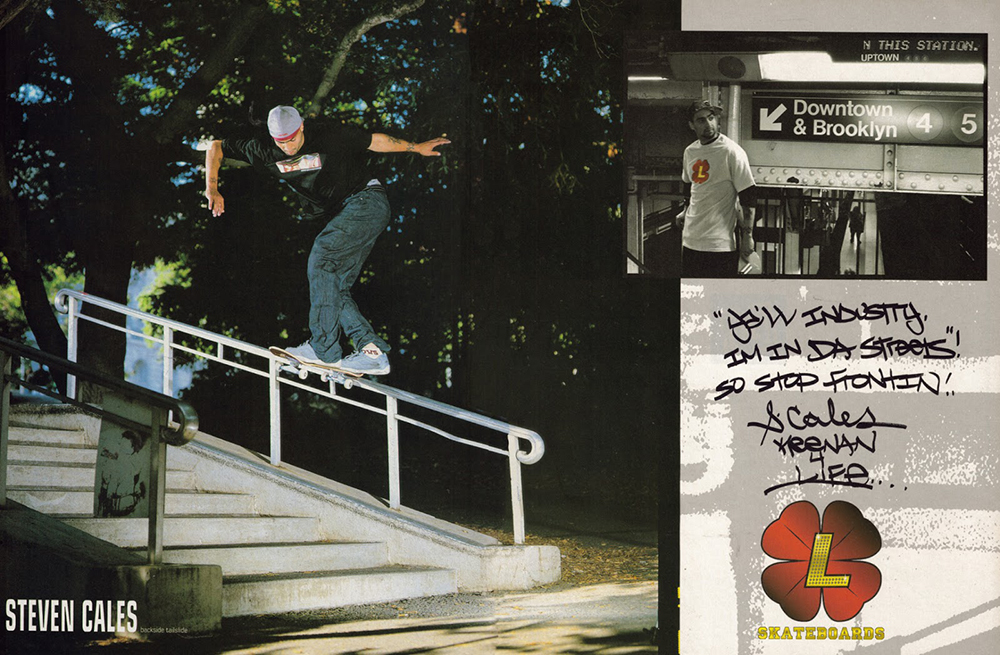 48 Blocks: So you’re out in Los Angeles skating with Gino, and all those dudes. Then, a little bit after that, you started skating for Lucky and moved up to SF for a little bit.

Steven: That was like 2001. Greg Carroll is my friend. And he knows how much I can be a knucklehead. But he’s always been down for me. He was like, “Just come out here and live with me man. You don’t gotta pay rent, just skate and stay out of trouble.” It was a blessing.  I was on Lucky. I got on, but Henry had just left for DGK. I was kind of the older guy on the team. I guess they expected me to kind of run it. It was cool. I got along with everybody. Jack Curtin was ripping back then, and look at him now. He blew up!

48 Blocks: Around that time, I was skating with you a little bit. We were hanging out with Jeff Simmons. Everybody was headed to LA for the Yeah Right premier, then you just disappeared, and nobody heard from you after that until recently. What happened?

Steven: What happened then was I was struggling with partying too much. I just wigged out, dumbed out really. I just didn’t go. When I’m like that, when I’m in that mode of self-destruction—that’s what I call it, cause that’s all you’re doing is killing yourself—I don’t come around because I don’t want the skateboard world to see me like that. 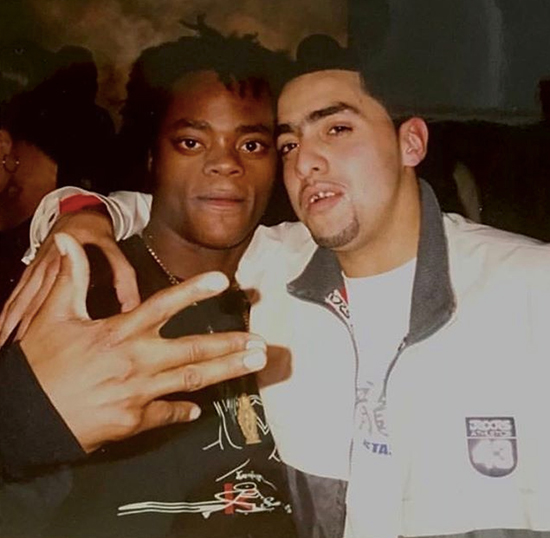 48 Blocks: Yeah, you don’t want people to see you in that state.

Steven: God forbid anything would happen to me, like I got shot in the face during those times. If I would of died… I didn’t want people to see me like that, cause I took it way too far. But I’m all right now.

48 Blocks: Yeah I heard you got shot. That’s a crazy one. Then you got locked down again. When did you get out this most recent time?

Steven: Man, like a year ago. This is the longest I’ve been out for a while. And I want to stay out.

48 Blocks: That’s good man, I’m proud of you. So what have you been up to for the past year?

Steven: I’ve been skating. But I recently fell off for like a month or so. I was going through some personal problems—a little break up, and the loss of a newborn baby. It kind of hurt, and I kinda fell back into the party thing because of that. I don’t know. But now I’m all right. Kind of clear minded, and trying to go forward.

48 Blocks: How has the response been from the skate community now that you’ve been coming around again? 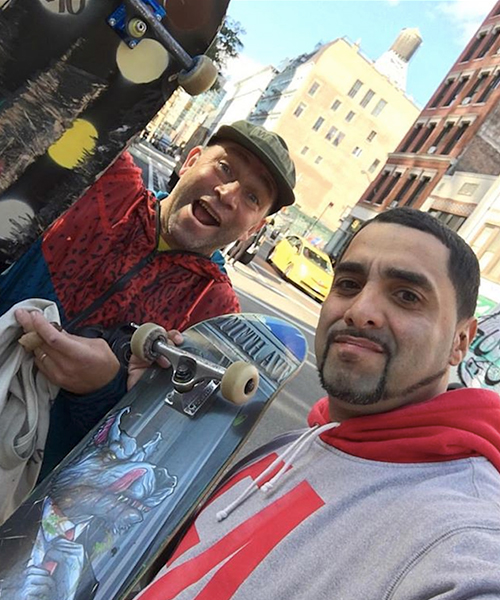 48 Blocks: You still got it? Can you still do all that shit you could do before?

Steven: Not all of it, I can do some. I haven’t skated for a little while cause of the little personal drama that I’ve been going through. I’m gonna start skating now though. I’m gonna call some people, and try to get some boards.

48 Blocks: Dope,  any last words that you want to say to wrap this up?

Steven: Yeah I just want to say be yourself, skate, don’t get distracted by the streets and what everybody else is doing, handle your business, stay focused, stay free, and keep it one hundred. Rest in peace to Justin Pierce, Harold Hunter, Keenan Milton, and Pepe Martinez.