Richard Mulder’s technique on a skateboard always stood out. Just watch the pop and catch on his tricks, and you’ll see what I mean. Being that he seemed to have perfected his craft, the fact that Richard decided to shift his focus from skateboarding to a more traditional career path at the prime of his career was always somewhat of a mystery. Fortunately, instead of disappearing completely, he re-emerged as pro on Hosoi skateboards, and more recently started his own clothing line called Heel Bruise. It’s definitely good to see Richard back in the mix. The following interview starts with the beginning of his career, and walks us up to present day. It’s an interesting story for sure.

48 Blocks: You got sponsored at 14, which is pretty young, how long had you been skating when you first got hooked up by Milk?

Richard: I started skating around late 1987, I was just about ten years old. So I was skating for four years when Hosoi put me on Milk.

48 Blocks: How did you wind up on Foundation? Was Super Conductor Super Collider your first video part?

Richard: I got on Foundation towards the end of 1992, after riding for Milk for several months. Josh Beagle moved to the Inland Empire. I met him through Scott Weber, who was skating for Think at the time. Foundation came out from under the World Industries umbrella, and they were starting a new thing. Josh put me and Tony Briseno, who was also on Milk, on the team along with Steve Olson, Jason Rothmeyer, and Ronnie Craeger. We all filmed the Cocktails video together, which was before Super Conductor Super Collider. Cocktails was my first video part. That was when skateboarders filmed on whatever camera was available. 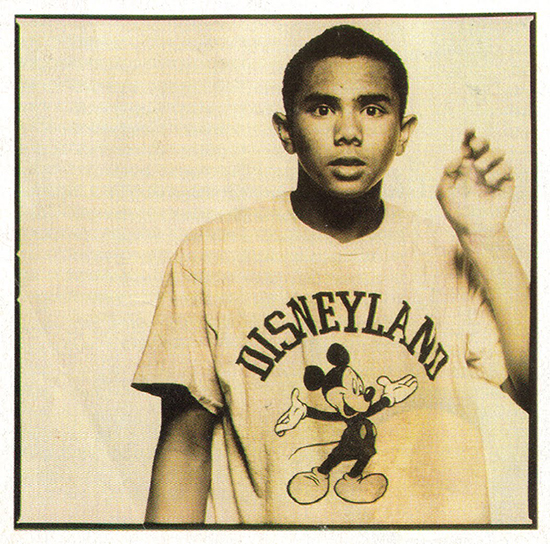 48 Blocks: When did you first start skating Chaffey?

Richard: We discovered Chaffey around 1991. We were searching for new spots and found it. It was about nine miles from my house in South Fontana. At first, we would just skate there occasionally. But then come 1992, it became the “go to” spot to skate, minus the weekend trips to Santa Monica.  ‘92 – ‘93 were memorable years, which were the early years of Chaffey. Phelps got sponsored by Planet Earth. Marcus Stroud moved Inland near us. We didn’t have too many concerns about anything. We were all stoked to get free boards. Three dollars in our pockets, two for gas, and one for a $.99 Whopper did the tricks for us kids.

48 Blocks: How did you first meet Daewon Song and Daniel Castillo?

Richard: I met Daniel and Daewon at CASL (California Amateur Skateboard League) in 1991. I used to have my parents drop me off in LA, or just stay up there when my friends would drive up. Daniel and Daewon would come stay at my house in Fontana for the weekend and film for Love Child. Both of them had influence on my skating. We had so much fun skating, pushing each other. Not in like a coach style motivational push, but more like pushing yourself out of fun times. I remember one day, it was raining in Fontana, and we went to the local school hallway and did inward heelflips for hours, or at least tried them, after being inspired by Sheffey’s inward heel.

48 Blocks: What do you remember from the early World Industries days, and what was it like being a part of such an influential team during such an innovative time in skateboarding?

Richard: For my era, it was a skateboarder’s dream come true. Even right before I got on World, staying at Daniel’s in Culver City on the weekends, I would remember running into the Blind guys at night at the Santa Monica curbs. I would just trip on Tim, Guy, Rick, and whoever else was skating. Shiloh, Daewon, Jed, all of those guys were ripping. 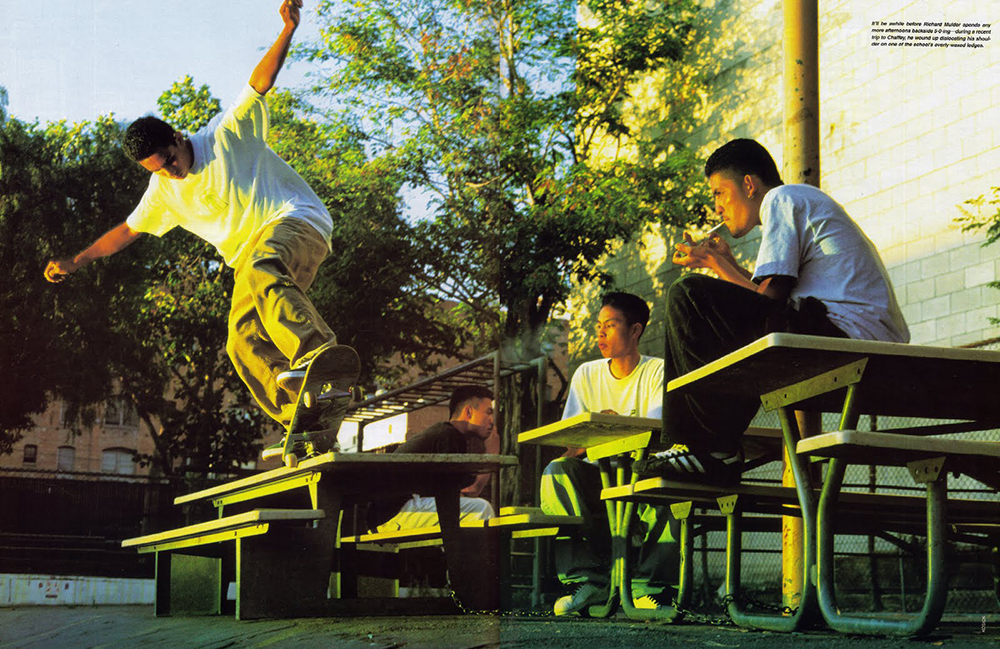 48 Block: World ran some pretty controversial graphics and some of the stories about things that went on around the World Industries warehouse and at Big Brother mag would seem to definitely conflict with your current religious beliefs.

Richard: No conflicts. I didn’t have much of any spiritual awakenings or a divine prospective until I was 16. And even then, I was still an infant spiritually. Looking back, that really never crossed my mind in how to react or not. My faith in Jesus was never swayed by a company’s marketing initiatives because my encounter was personal and real.

48 Blocks: You were a part of the original Chocolate team, what do you remember from that period, and what was it like leaving World?

Richard: I was 15, getting free boards, and receiving $300.00 a month! That was a lot for me. I came from nothing. Just getting back from a summer tour, we find out Girl was about to start. We were very bummed.  It was almost a year that had past before they started Chocolate. Rick and Mike were filming for the Girl video at Chaffey, and asked me if I wanted to ride for Chocolate. I was hyped they asked me, and was stoked to be a part of a brand new company.

48 Blocks: What do you remember about filming for the Girl / Chocolate videos, and working with such a talented group of people? 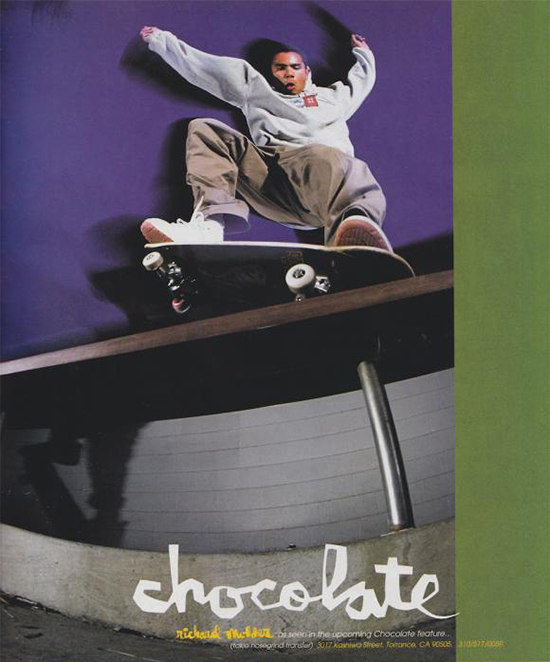 Richard: Filming for the Mouse video was a fun time in skating for me. Tim Dowling filmed most of my part. We had a lot of good times skating new spots. About 70 percent of the time I filmed they were solo missions.

48 Blocks: When they first re-entered the skate market, you were a part of the Nike SB team and the Richard Mulder Dunk was a highly sought-after commodity amongst sneakerheads worldwide. How did you hook up with Nike, and get your own signature colorway? Did you think that the shoe was going to be as popular as it was?

Richard: The Nike opportunity came through Stussy. They wanted to get involved in the skateboarding industry, and stay involved for the long haul. So Robbie asked me if I was into the idea of riding for Nike. I was down. I just felt that Nike was serious, and was willing to go for it. DVS at that time had a full roster of amazing talent. I felt like this new venture would be refreshing. I had no idea that it would evolve into a sneaker phenomenon as well. Regardless of the phenomenon that took place, Nike SB still kept it core to their original initiatives of making great skateboarding footwear. I feel super fortunate to have been a small part of that.

48 Blocks: You seemed to have switched gears at the top of your game. You were riding for Chocolate, Stussy, and Nike—which are some of the best sponsors anyone could ask for—when you got into real estate, and later financial planning. When and why did you decide to shift your focus from professional skateboarding to pursue other things?

Richard: I started working in the real estate industry in 2005 when I was still riding for those sponsors. Being at a personal crossroads moment in my life, I just had to be honest with myself that I did not possess the same passions and skills to be the skateboarder that I personally would be satisfied with. In the light of my convictions, and the level of skateboarding that was going; I felt it prudent to develop other skill sets so financially I was able to provide for my family.

48 Blocks: I’m assuming that you had to undergo some sort of training or certification process to do what you’re doing now, what did that involve and how did you balance that with skating? 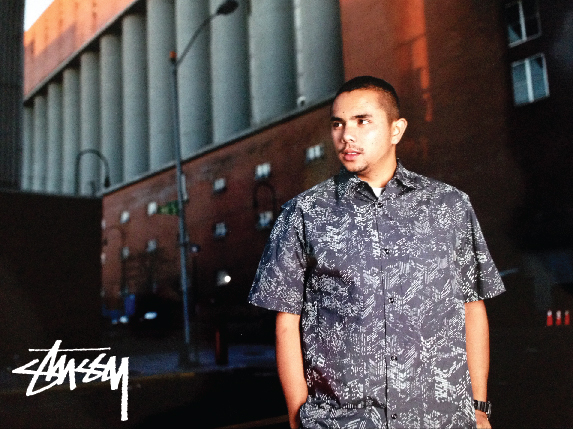 Richard: Sadly, there were no sessions going down while studying. Obtaining the credentials to participate in both the real estate and the securities industry, whether a Real Estate, Series 7, or Series 66 license, is hinged upon a harsh, disciplined plan, which skateboarding helped me with. I would remind myself of when I was in front of my house in 1988 practicing kickflips for countless hours. I had to try to apply that same determination. Sounds ridiculous, but whatever, it worked.

48 Blocks: Being that soon after parting ways with your former sponsors, you hooked up with Hosoi Skateboards; it doesn’t seem like you ever really stopped skating.

Richard: It’s funny how perception can seem like reality. The truth is that I only skate a fraction of when I used to skate professionally full time. I would love to find time to skate more, however other duties have taken priority. I have been doing the four-day work week for three months now. I take Fridays off, and go skate! I’ll also skate during the weekdays after work with the neighborhood Wassup Rockers.

48 Blocks: More recently you started your own brand called Heel Bruise that’s been gaining a lot of popularity.

Richard: I started Heel Bruise in October of 2008 with Thomas Yu and Robbie Jeffers, who both worked at Stussy during the time of its skate program. I started Heel Bruise because contrary to working in a suit and tie marketplace, I wanted an outlet to project what I love—which is skateboarding, and exuding the brilliance of everything about it. We’ve been very fortunate to receive the support and cheers from all the shops that get what we’re doing. Every season we are growing with hopes to fire Realtor Richie in the near future.

48 Blocks: Do you design the t-shirts, or come up with concepts for the designs?

Richard: Thomas Yu and I do. I grew up skating with Thomas. After high school, I went the pro skater route. He ended up attending and graduating from Art Center, and worked at DVS, then Stussy during the entire skate program. And then, he branched out and started a motion graphics company for a while. Now we are back together doing Heel Bruise.

48 Blocks: What are your future plans for the brand?

Richard: Our main focus for the brand is keeping it fresh and exciting for ourselves, everything else falls into place secondary to that. We are working on a video that will be free coming out in late summer or early fall. We are working on expanding into Sweden and Japan this season, and would love to continue opening up international distribution outlets.

48 Blocks: I think most people, myself included, will always remember you for your style. What skaters influence the way you skate, or do you consider to have a good style on the board?

Richard: It’s funny hearing kids nowadays talk about style and how they have to work on their style. Because growing up, the way your style was, was just the way you skated. My nephews the other day were clowning on my style. It was interesting because I was telling them that’s just the way I skate. Growing up I was inspired by Matt Hensley, Jason Lee, Rick Howard, Guy Mariano, Rudy Johnson, Ronnie Bertino, and Jovontae Turner. Before I go skate nowadays, I will just YouTube one of their older parts to get hyped. There’s so many more too. But that’s several inspirations.

48 Blocks: Any last words that you like to say to wrap this up?

Richard: I am extremely thankful for skateboarding and all the friends that have supported me in it for many years. Thanks and appreciation to 48 Blocks for giving me the opportunity for this interview.