Over the past couple of years, The Skate Kitchen has been everywhere. From features in Nylon and Paper magazines to Nike campaigns, these girls are clearly destined for stardom. A significant crossover moment is set to happen next month when Crystal Moselle’s film about the crew is released in theaters. It stars Rachelle Vinberg opposite of Jaden Smith in what looks to be a 2018 version of Larry Clark’s Kids [1995] told from a female perspective. Similar to Clark’s cult classic, Skate Kitchen is loosely based on the girls’ real lives with founding member Vinberg at the center of it.

At only 19, Vinberg can best be described as a millennial incarnation of the prototypical Downtown New York It Girl who happens to have a mean tre flip. Given the waves that her crew has been making lately, I decided to catch up with her during adidas’ 3MC launch event at The Flower Shop in the Lower East Side, where she was showing her photography alongside a group of influencers hand-picked by the brand to tell their own personal stories of experiences wearing the shoes.

Slightly reserved and a bit wary of the sudden fame that found her almost by accident, Vinberg broke down how The Skate Kitchen crew and film came to be, why female skateboarding’s current moment is so important for the culture, and where she sees this movement going in the future. My biggest takeaway from meeting her is that whatever that “it” factor is, Vinberg definitely has it. I have a feeling that we’ll be seeing much more of her both in and outside of skateboarding in the future.

You’re from Long Island. Tell me a little bit about your history and how you got started skateboarding.

When I was 12, I saw my cousin skating. That made me want to skate—basically, just seeing him. I remember he was trying to learn a tre flip. I was like, “I wanna learn that one day.”

What was your progression from first seeing it to going to skateparks and learning tricks?

At first, I skated alone. Then, I met people. I was just having fun and learning what they were learning. It all felt like having fun; It still is. I just do it for fun.

How did New York City come into play as far as coming here and skating?

I’d always watch skate videos. A lot of the footage was based in New York because it’s just so cool to skate here. I always wanted to come here. But I didn’t know anyone. Then I met my friend Nina. She’s another girl skater. I started going out with her, and she was showing me all around. She showed me all the spots and introduced me to everyone. I always knew I wanted to live here when I went to college. So I just moved here when I was 18, and have been skating the city ever since.

You started The Skate Kitchen. How did that come about?

Yeah, before I actually moved to the city I would come out on the train every weekend to skate with Nina. One of those weekends when I was with her, this lady came up to us on the G Train and asked if there were more of us—meaning girl skaters. She explained that she was a director. Then, we became friends with her and introduced her to other girls that we skate with. She wanted to make a short film with us in it for this brand called Miu Miu. So Nina reached out to all of her other girl skater friends that lived in the city. I met them and we all started skating as a group, and we decided to call ourselves The Skate Kitchen. 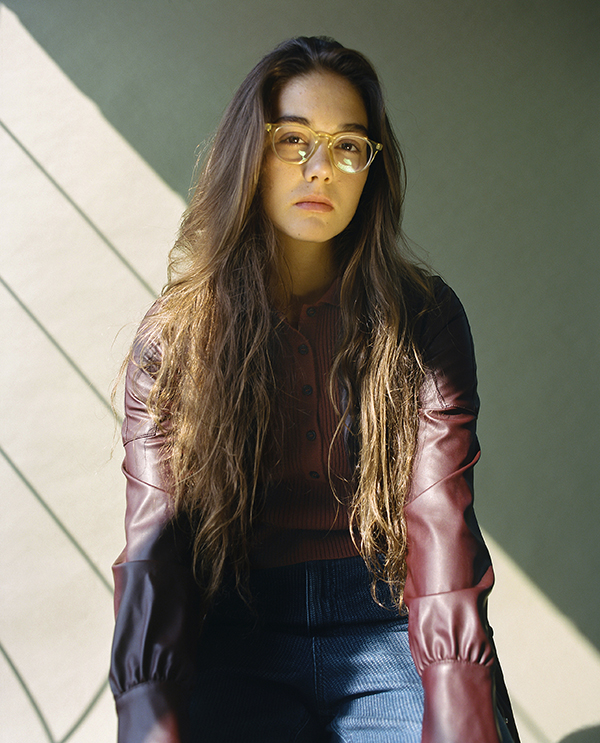 So the film and the crew started simultaneously?

The crew was first. The short film was for a fashion brand. We did that first, and that’s how we got to know each other. Then we just started skating together and hanging out. I made The Skate Kitchen Instagram just for fun. I didn’t think people would start following it or anything. I thought, “Why don’t we just post our stuff here for fun? We can watch each other skate.” Then Crystal [Moselle], the [Skate Kitchen] director was told by someone named Kim Yutani—she’s the head programing director at Sundance—she said, “you should make a movie about them.” Then Crystal says, “Yeah, I think I’m gonna do that.” We made the movie a year after we made the short film, but we incorporated real-life things. Like, The Skate Kitchen is in the movie and it’s called Skate Kitchen. So it’s like this hybrid sort of thing. We hang out with Crystal all the time. She’s our friend. She took elements from stories that we would tell her from our lives and put them in the movie. So it’s all kind of jumbled together.

The film releases next month, and the trailer looks good. It has shades of Kids [1995] and New York that are super familiar, but told from a female perspective. What are your thoughts on it now that it’s complete?

Making the film felt like summer camp. When I think back to the process, it really doesn’t feel like we were making a movie; it just feels like we were skating in New York and I was hanging out with my friends. So it’s really authentic in the sense that it captures what it feels like to be a kid who skates and lives in New York. We show all of the skateparks: Cooper, LES, and Fat Kid are all in there. We got the spots—all the Chinatown spots, Blubba, skating Midtown at night and getting kicked out by security guards. Not only that, we actually have the real kids in it too. It’s all of our friends, except for Jaden Smith. He was the only kid that was brought in that wasn’t originally our friend. Shredmaster Keith is in there; everyone. So when I look at it, I feel like I’m watching something that I would watch on Instagram of us hanging out. You know what I mean? It reminds me of that.

Except it’s shot on movie cameras.

Yeah, you know what it’s like? It’s like all of the stuff that you don’t see on Instagram—that lifestyle part.

So what was it like injecting Jaden Smith into the DNA of all of these real-life characters? He was the only outsider.

Actually, he was kind of an outsider, but he also wasn’t. I had met him. The reason why he got into the movie is because he DM’d me a long time ago—this was like 2016—saying he wanted to skate. So I knew that he skated. When the director asked me if I knew any actors who skate, I told her I know Jaden Smith. He was already familiar with skating. And he knows how to skate. In preparation for the film, he hung out with us for weeks. So he met everyone already before we even filmed. So it really just felt normal. Kids were used to seeing him at the park by the time we shot the movie. Even when we weren’t filming, we’d be out skating the streets and going to Battery Park skating spots. So it didn’t feel like he was “Jaden Smith.” 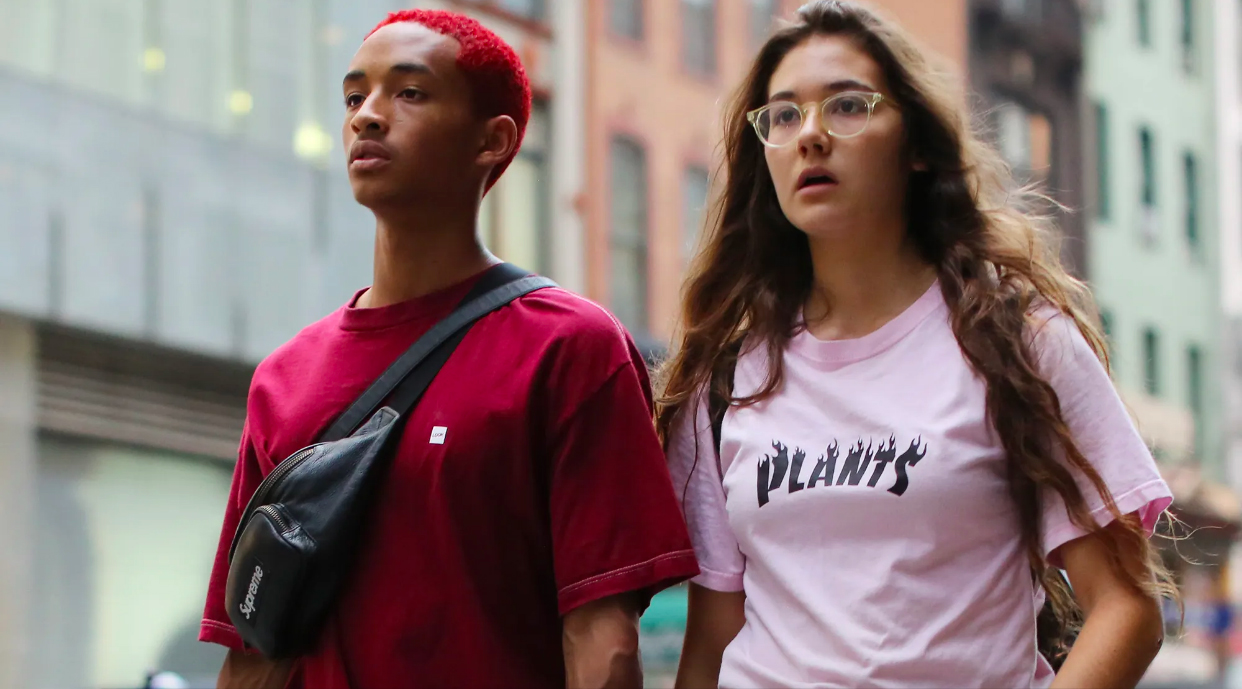 In the process of all of that you got sponsored by Fortune skateboards.

Brett Conti and I grew up in the same town. I knew him from that, and he was kind enough to give me boards.

You’re also an adidas ambassador as well. Talk a little about that and specifically this 3MC project.

So you’re skating, have a film coming and out, and still in college—where do you see your trajectory going?

That is what I’ve been trying to think about for a long time now. But I think something in the film industry probably. It’s just a lot of fun. It felt like when you’re skating and you’re trying to film a clip. It takes a lot of tries, and you have to think of creative ways to film it. That’s what making the movie felt like. But it was on a different scale doing different things. I think I would want to do that. It’s also something that you won’t get hurt doing!

Skate Kitchen went to Sundance, and your crew has been getting a ton of press. Have you been getting contacted to do more projects yet?

One thing I’m focusing on now is trying to do auditions for other movies and stuff. I don’t even consider myself an actress. It’s still weird for me to say that because it happened so organically. So I’m just trying to see if I like that. People have been sending me scripts and stuff, so I might try to do that. 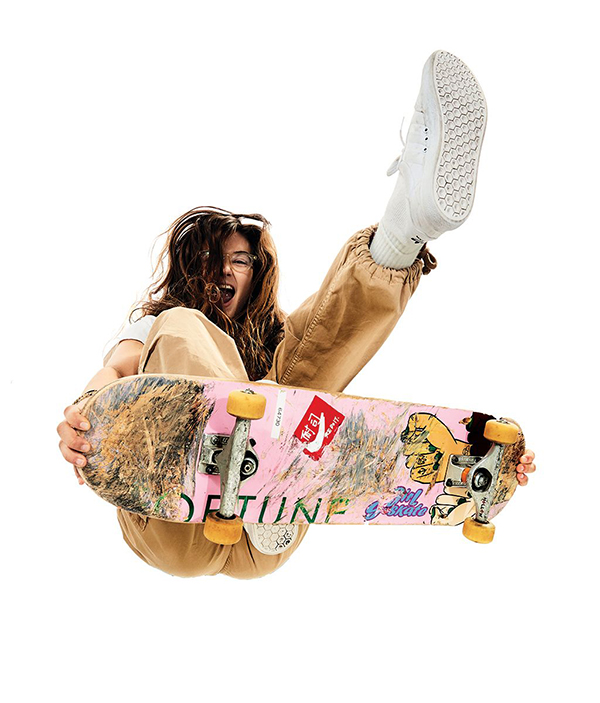 What are you studying in school?

I’m studying film at Brooklyn College. But I don’t know what aspect of film. There’s a lot of “I don’t knows,” basically.

Any other projects that we should be looking out for besides the movie?

We’re going to make merchandise for The Skate Kitchen, and hopefully go out to different cities where we premiere the film. We’ve already been going out to different cities, premiering the film, and skating with people. That’s another cool thing. There’s a girl crew in every city that we’ve gone to. I was just in Taiwan, and there’s a whole girl crew out there. It was so sick!

“We’re going to make merchandise for The Skate Kitchen, and hopefully go out to different cities where we premiere the film.”

Everyone knows that female skateboarding is taking off right now. What are your thoughts on it, being that you are a part of this emerging aspect of the culture?

When I first started skating, it naturally felt a little intimidating. Especially considering that you’re the only one of your gender going into a park. But now there’re more girls skating. What I want to see in the future is more boys and girls skating together. I don’t like the idea of girls skating separately and boys skating separately; that’s not how skateboarding works. So The Skate Kitchen is not an all-girl group, it’s more just a group that’s encouraging girls to go out. But we all skate with everyone. So in the future I just want skating to be enjoyed by everyone—all genders—and it not really being a thing—thinking about gender.

What’s your take on the industry’s reaction to the female skate movement? I feel like everyone is trying to get a piece of it right now.

Yeah, I think that it’s good that it’s popular right now and getting promoted. Prior to all of this, there wasn’t really girls in magazines and all of that. I don’t remember seeing girl skaters. If little girls only see guys in the magazines or media, then they’re going to associate it with being a guy’s sport. So now that they are seeing girls, whether it be on Instagram, magazines, or videos, they are going to see it as something that they can do also. It’s also normalizing the idea of girls skating. A lot of people are annoyed by it, but they shouldn’t be. It’s something that needs to be done.

Good point. If you weren’t skating and pursuing a film career, what do you think you would be doing? What else are you passionate about?

I would probably either be a lacrosse player—I used to play lacrosse—or an English teacher.

Originally Published on The Berrics