Paulo Diaz was a central figure in skateboarding throughout the ‘90s. At one point, he was considered to be one of the best street skaters in Los Angeles, and skated for the best companies. One day, without much warning, Paulo left skateboarding to pursue a different path in life that included world travel, art, and music. It’s obvious through his skating and other pursuits that Paulo is a true artist. For him, skateboarding is just one form of self expression that blends seamlessly with his other passions. We were recently able to get Paulo to answer a few questions about his history, skateboarding, and what he’s been up to for the past decade or so. Special thanks to Jamel Robinson his role in making this interview happen.

48 Blocks: Where are you from originally, and when did you first start skateboarding?

Paulo: I’m originally from Guatemala. I moved to Los Angeles when I was four years old. I started skating when I was twelve. So that was probably like ’85 or ’86. ’86 was when I really started, like, going off curbs and bonlesses.

48 Blocks: When did you meet Guy [Mariano], Rudy [Johnson], and Gabriel [Rodriguez]? 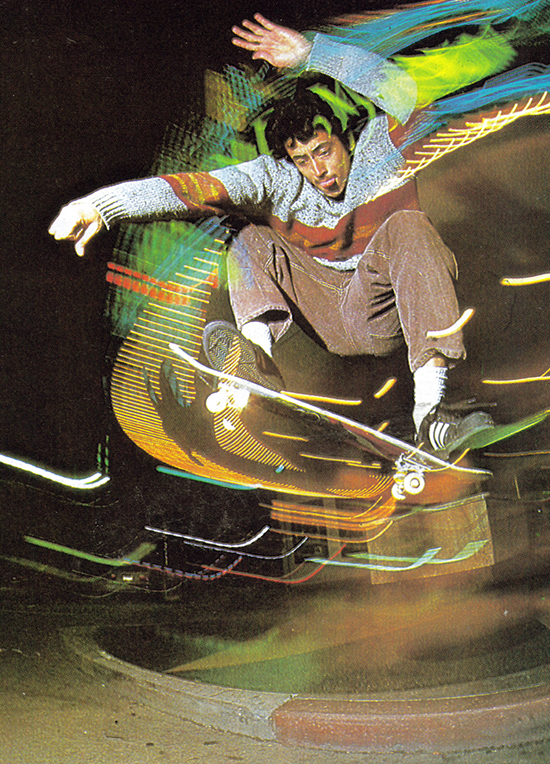 Paulo: I met Gabriel first. I met him on Wilshire, just skating Wilshire, skating LA. Wilshire was the spot though. I met Guy and Rudy through a contest. We all skated for Rene’s. So I met them through Rene’s, a skate shop on Melrose. This guy Rene owned it, he was a Guatemalan guy. It was pretty cool. It was a record store, and a skate shop. So it was super awesome.

48 Blocks: How did Powell come about?

Paulo: We got on Powell-Peralta because they walked into that skate shop one day, and there was a Gabriel Rodriguez’s sponsor-me video playing. They saw the video and they were like, “Wow, this guy’s good! We want to see him.” The Gabriel told them that you should check out his friends too. There were four of us. So they were like, “Damn!” I finally met Stacy [Peralta] at Los Feliz. That’s where the meeting was to try out for the team. When they saw that it was us four, and how we hung together, they didn’t know who to sponsor. So they sponsored the four of us.

48 Blocks: What was it like filming for Ban This? Did you guys just cruise around and find spots to skate? That part has that sort of vibe to it.

Paulo: Well yeah, they call me L.A.P.D.,Los Angeles Paulo Diaz, because I was the enforcer on the streets back then. I used to round up all the homies. I didn’t give a fuck. There’d be like fifty of us that would go skate. That’s how I found all the spots. Then when Guy, Gabriel, and Rudy came down, we’d just hit up all the spots. That’s how it was. And in those days, it was just like going out on a skate day. That’s how we skated back then. We’d start at my house, and I’d have the map ready. Then, we’d just skate and hit everything down Vermont to Wilshire. Then, all the way down Wilshire to Century City, and still skate Century City. Then, skate back. So that’s how those days were. When we filmed Ban This, it was a trip because Stacy used to come. We filmed the whole video part in one day! We’d go skate a little bit, eat, then skate more. That’s how we used to film those video parts back then. It was like one or two days.

48 Blocks: You rode for Powell for several years, then after that you skated for Stereo and Blind. But you weren’t in Video Days or A Visual Sound.

Paulo: I met Chris and Jason Lee around the same time. They lived right here. They lived with Henry Sanchez. We ended up just skating, and having a good time. I got on Blue. I didn’t come out in those videos because I kept getting offers for more money to skate for other companies. So that’s what I did. I was just jumping around from team to team. I wasn’t happy back then. The reason why I ended up skating for Blind was because Rodney Mullen was really cool. I could sit down, and talk to him. All those guys were like really cool. They were awesome! I miss those guys a lot. I miss skating for Blind. I miss skating for World because they’re the ones that listened to me the most on ideas that I had. I always wanted to get to know the people more that I skated for. I always had ideas. They never went through. So that’s why I never ended up doing a video part for any of those teams. It kind of just went on like that forever. I just wasn’t happy with not being able to do my art for my skateboards, and not being able to have input. That’s kind of what I realize now—that I wasn’t happy.

48 Blocks: You were a part of Chocolate from the start. How did that come together?

Paulo: Yes, I was. Everybody was coming to LA. So that’s how that came together. Megan (Baltimore), I love Megan. She’s so cool. That’s why it happened. I always thought Megan was cool. Everything that she stands for is awesome.

48 Blocks: You’re known as being one of the best skaters during that ’90s Lockwood era. How did you discover that spot?

48 Blocks: Your part in Las Nueve Vidas De Paco was super gnarly. After that, you kind of disappeared from skateboarding. What Happened? 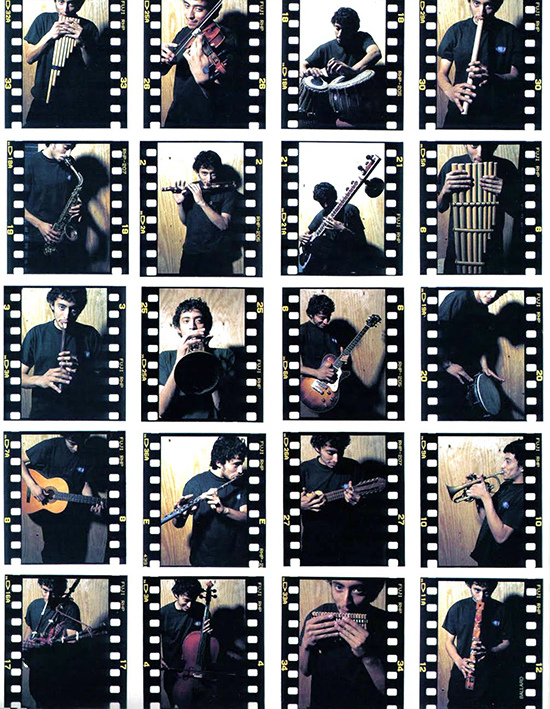 Paulo: I went to South America, to the Andes and to Bolivia, to the highest city in the world—twice for a couple months at a time. I wanted to get into music, and did get into music. I ended up realizing that I wanted to play a lot of instruments. Each instrument takes hours a day. So I had a whole gang of instruments that I had to sit down and learn how to play. I bought them. I went to the top of the world to get them in the Andes. So I had to learn how to play them. That’s what I started doing. I started playing a lot of music all day everyday. Then I went to India. That even made things heavier because the instruments are even harder. 24 hours a day wasn’t enough to learn how to play these instruments. So that’s what happened.

48 Blocks: What first got you into making music?

Paulo: I got into music, especially the sitar and all of those instruments, because I used list to KXLU. This station that was kind of underground. It was all the way at the end of the tuner. They had the best show. Late at night, they would play world music. I just couldn’t believe what I was hearing. The sitars and all of these instruments, I was like “What, what is that?” So that’s how I got into music. Then, after that, I realized that the Beatles’ George Harrison also played sitars. That even got me more into it. That’s it. That’s how I got into those instruments.

48 Blocks: What have you been up to for the past 10 or so years since you disappeared from the public eye?

48 Blocks: There have been various internet clips of you skating that have popped up recently. Are you planning on making a comeback?

Paulo: Well, I never left. I’ve always skated. There’s footage of me on YouTube through the years. You can check it out. I’m definitely back. I never left. Skating is too precious and fun to not be doing it. I just want to do it.

48 Blocks: One thing that stands out about your skating is that a lot of it seems to be just cruising around, and finding random things to skate. It reminds me a lot of Mark Gonzales. Is this something that you consciously do or is that just more natural for you?

Paulo: It’s just all natural. I just go out and have fun. Go where the love is, where the fun is.

48 Blocks: You’ve traveled extensively on your own and through skateboarding. What are some of your favorite places and why?

Paulo: I remember with skateboarding, Prague was awesome. Finland was awesome. Australia was awesome. Barcelona is the best. I like it there because they got ancient skate spots in Europe.

48 Blocks: How much does skateboarding influence you musically and vice versa?

Paulo: They both go hand-in-hand. Nowadays, the music is really inspiring my skating again. It goes back and forth. I can’t do one without the other. They’re both improvisations, just organic fun.

Jamel: Is it true that you taught Christian Hosoi how to nollie?

Paulo: Well, he used to come and pick me up at my house cause he wanted me to teach him how to nollie. He wanted to learn how to street skate more. So he’d come pick me up. Jason Lee asked me that too. And, believe it or not, I used to hang out with Mark Gonzales. Mark would ask me what trick he should do. Crazy, right? He probably asked everybody that. I don’t know. The fact that he asked me what trick he should do, and he did a trick that I told him to do—I can die happy.

48 Blocks: Any last words that you want to say to wrap this up?