People come and go at their own pacein skating. Some people stay in it for decades and milk it for all it’s worth. Some get in, do their thing, then move on with little fan fare. Maurice Key is the latter. In the few years that he was in the spotlight, he was regarded as one of the best. When he left, people wondered. But like so many before him, Mo drifted out of people’s memories as one generation passed the torch to the next. You really had to be skating at that time to fully appreciate Maurice’s talent. He was truly ahead of his time.

48 Blocks: You’re originally from Brooklyn. How did you get into skating and who were some of the people that you skated with back then?
Maurice: I got into skating pretty much from all the kids in the neighborhood that were doing their thing. Back in the day I skated with Joey Alvarez, Ryan Hickey, Javier Nunez, my homie N.A., Ivan Perez, Steven Cales, pretty much all the Brooklyn cats… Earth from the Bronx, big shout. Ian Reid, all the New York cats pretty much… that’s how we used to do it way back, and that’s what it is.
48 Blocks: What year was this?
Maurice: This was about fourteen years ago, around 1992 – ’93… way way back. 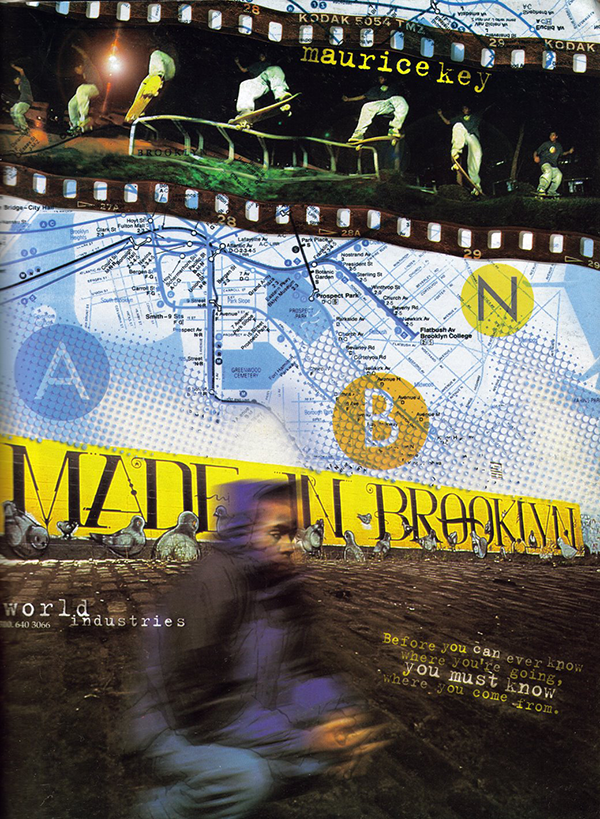 48 Blocks: Give a little insight into the early Brooklyn Banks and early Supreme days. That was sort of the heyday, the Kids days.
Maurice: It was all good. It wasn’t a lot of these bullshit politics that’s going on now. Everybody was family. Now you got a lot of cats that get caught up in what they do and in a way they kind of forget where they came from. Back then it was more of a family environment as opposed to the scene today.
48 Blocks: Who was your first sponsor, was it World Industries or was there something before that?
Maurice: Aw man, you know… I’m a local New York cat so I had little local sponsor from back there. We had this little company, I think it was called Ghetto Skateboards or some shit like that. That was my first real sponsor. Then I had a sponsor from a skate shop on Canal street called Basic skateboards. Then from Basic, Supreme started flowing me shit; then World was my first official real-deal sponsor.
48 Blocks: How did you get hooked up with World?
Maurice: I came to Cali in about 1994 or ’95. Me and my homie Joey Alvarez bought a ticket – you know what, it was before that. It was way before that. Me and Joey Alvarez bought a ticket and did our thing, came to Embarcadero and met up with everybody, got down and skated and shit, went back to New York; then once we went back to New York that’s when the doors kind of started opening for us.
48 Blocks: So moving past 20 Shot, there was Trilogy. If you haven’t seen Mo’s part in Trilogy, seek it out cause it’s official… it still stands up today. Talk about the filming of Trilolgy and how that came together.
Maurice: Aw man you know, ghetto style man… here and there. For the most part, I’ve always been like a hustla kinda cat… a smart, young, older individual. I was doing my little skate thing, but I didn’t take it for what it was back in the day. I was lookin’ at it more like a hustle. I was a young cat back then anyway. A lot of that shit was pieced together here and there. My man Socrates used to film us, then a lot of it was just regular home boys filming us. It was just skate shit, having fun you know.
48 Blocks: How did you transition from World to FIT?
Maurice: The hustle continues man, the kid was a little older then… you know, money was an issue. I didn’t have time to wait around, put my time in, and do it the right way. I got hit with an offer and I swooped on it… put it like that. It was that hustler mentality, the money talked at the time and I had to swoop on it. That’s how that went down.

48 Blocks: So FIT was the first Maurice Key pro model?
Maurice: Most definitely.
48 Blocks: So FIT was doing its thing, then things happen, then boom FIT goes out of business. What did you do after that?
Maurice: Shit, like I said I was a hustla. I got with my home boy Jeff Simmons, my home boy Daniel aka Hash – Dougie Fresh’s little cousin. We got together with a network, a little delivery service out in New York. You know what I’m talkin’ about. We was puttin’ that money in our pocket and that’s pretty much it man. From there I kind of retired and stepped back. I kept in touch with all my homies in the skate game, but I pretty much had to do me and take care of myself at the time.
48 Blocks: Is there any truth to the stories that I’ve heard that this little delivery service that you mentioned is what Chappelle based Mr. Nice Guy’s on in the movie Half Baked?
Maurice: Well, you know what’s up – you know what I’m sayin. I ain’t gotta say no more… you know what’s goin’ on with it.
48 Blocks: Ok, so you were out in New York doing your thing. How did you end up back in the Bay where you’re at presently?
Maurice: Well, when I came to Cali… for some reason I always liked the West Coast as a little cat. Once I came out here, I loved it. All the homies I met out here was real cool; they showed me love. I just stayed in touch with a lot of people and ended up coming on back out here to the place that I love. We’re on grown-man shit now, so it’s pretty much a place that I thought I could set a foundation for my future, for my kids, and shit like that. So, here I am… Frisco baby, Bay Area!
48 Blocks: So what are you up to nowadays? I’m sure that that’s the question that everybody wants to know… where is the Mo saga at now? 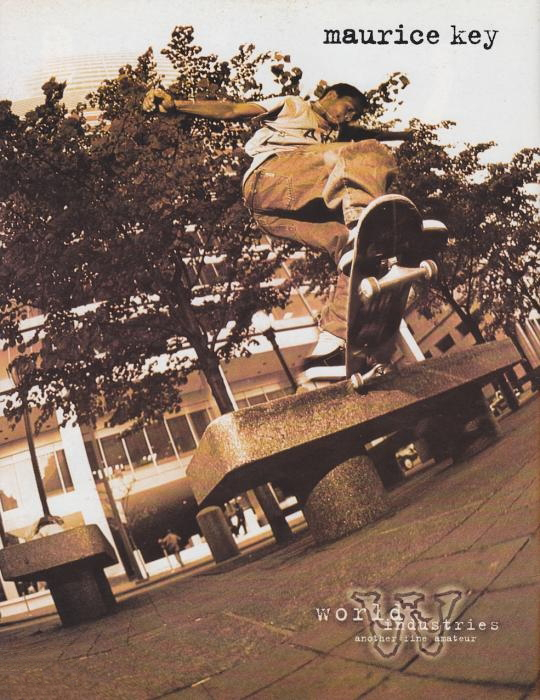 Maurice: You know, the kid works 40 hours a week. I’m an electrician, I’m a foreman now. I’m pretty much just a working man now. I still skate occasionally, I got the board in the trunk, you know what I’m sayin’. I can still put it down, it’s all good… but for the most part I’m a workin’ man.
48 Blocks: You just recently had a kid, congratulations. How’s fatherhood treating you?
Maurice: Let me tell you something, fatherhood is very tiresome. If any of you young cats out there are thinking about having a kid, you better really evaluate your situation and make sure you’re straight as far as the paper and the mental state. It takes a strong and financially stable character to have a baby. Other than that, it’s all good – I love it.
48 Blocks: Obviously you’re still in touch with Marcus and all the heads out here. Do you still stay in touch with Joey Alvarez and your old crew in NY?
Maurice: Aw man, I talk to Joey like once a week. I talk to N.A. and Javier, but they live in LA now. Joey’s like my road dog, he’s my best friend. We kind of came up in this shit together, he didn’t make it as far as I did but he damn sure shoulda cause he was just as good as me. But yeah, we talk a lot man. I still got ties back home, I’m from New York – I’m 5 Borough thorough. Just cause I’m out here, that don’t mean the love is lost for all my New York cats. Even though I ain’t gonna mention no names, but some of them cats be actin’ kinda funny yo, but hey it’ all good.
48 Blocks: There’s a lot of wild Maurice stories, is there anything that you can put out there in this interview?
Maurice: No comment, most of my stories are kinda crazy. If you see me, holla at me – we can build on it like that.
48 Blocks: What’s the illest trick that you’ve done in your opinion, to me it would obviously be the switch frontside 180 heel over the Brooklyn Banks wall. Nobody was touching that then and very few are touching that now. What’s your personal high on the board?
Maurice: Well, my trick was really that switch 180 heel flip. I could do all types of different variations with it and I can still put it down now with that trick. So pretty much that’s the back bone for me dog, switch 180 heels (into) tailslides, noseslides, whatever you wanna call it.
48 Blocks: Have you heard the news that FTC is re-releasing the Tantrum video on DVD?
Maurice: Hell no, I didn’t hear that shit! Where’s my cut? (laughs)
48 Blocks: You feel like they owe you some bread? 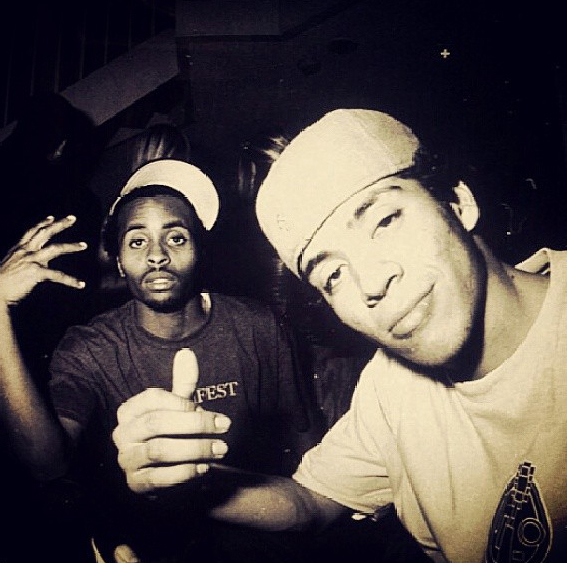 Maurice: Nah, I’m not too much into it for the money. Pretty much I feel like we’re all blessed as skaters cause it was just kind of like a thing to keep us out of trouble or a hobby that ended up turning into something a little bit more financial, for some of us anyway. Nah, they don’t owe me a damn thing. It’s publicity on my end if anything – so I’m not even trippin’. But hey, if you cats wanna hit your boy off, don’t forget about Money Mo. (laughs)
48 Blocks: What advice would you give to the youngsters out there in the streets, on the grind, learning tricks that want to get sponsored and take it where you took it during your time in skating?
Maurice: ust be yourself, stay true to yourself, and don’t get caught up in the whirlwind of this bullshit that’s going on these days. Just keep it real with yourself and stay focussed. Remember that skating isn’t the only thing on this planet, so you gotta keep your options open. That’s how you’re truly gonna be successful in this world, not only in skating but in general.
48 Blocks: Any last words or anything else that you wanna say?
Maurice: I’d like to give a little shout out to my daughter, Sage Rose, my girl Karen, my family, my mother, my brother, my sister, all the people that are still there in my life. To all you cats that I treated fucked up back in the day, remember that motherfuckers change over time and I’m on some grown-man shit – so you know, if there’s any hard feelings out there; we can definitely squash them.