Marc Johnson’s style is unmistakable. He’s inspired a generation with his progressive approach to the streets, while his antics off the board have provided comic relief during some of skateboarding’s most memorable videos. His understated uniqueness adds to his intrigue.  What Makes this guy tick? We did our best to find out in the following interview. – Dustin Umberger

Dustin: Tell as about what influenced your early video parts.

Marc: I think that during that time, I just wanted to put out the best footage I could. I was trying to get to the level of skating of the people that I was influenced by. But at the same time, I didn’t necessarily want to express myself as this person who just wanted to copy every trick in Gino or Daewon’s last part. I knew that people were always working on new stuff for upcoming videos. So that’s what I was thinking about a lot of the time. I love the shock value that new videos always had around that time, and keeping a certain level of that has always been a contributing factor in some of the stuff I’ve tried for videos. I think that most skaters would like to be well-rounded and not paint themselves into one corner or another. So I think I expressed myself based on what influenced me, and a lot of that was outside of skateboarding. The whole ‘Dickie’s with the white tee’ thing came from the fact that both are pretty cheap. And to me, they have a timeless quality. 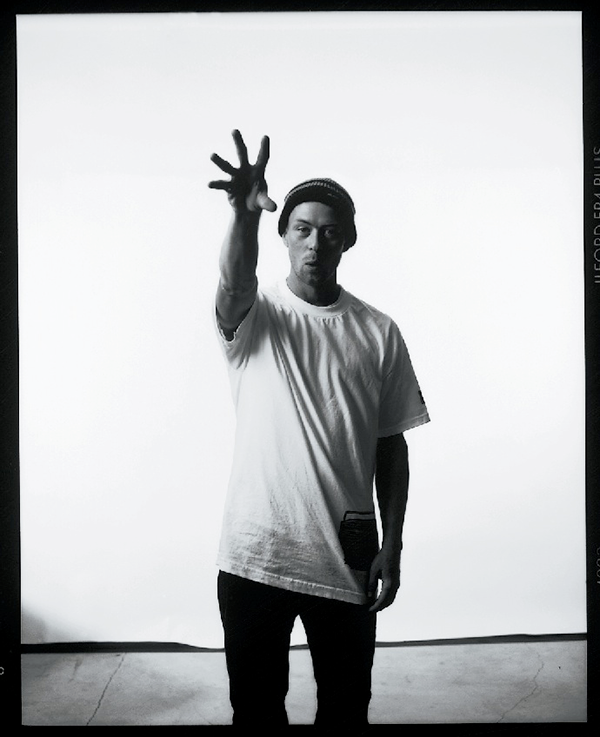 Dustin: Having fun with friends has been an ongoing theme in what you’ve put out. What does friendship mean to you?

Marc: Friendship can be strange. Proximity doesn’t define it. Mutual history doesn’t define it. And convenience should never even be a factor in friendship. I think that anyone with a good head on their shoulders knows the difference between a friend versus someone who only calls when they want something.

Dustin: From your clothes to tricks, you look extremely comfortable on a skateboard. What contributes to this?

Marc: I wish I could pin that one down, so I would have something to stick with. I think I find comfort in familiar things, like a board that’s a good three days old, or some shoes that are just worn in nicely. Maybe anything, once I get used to it and figure out that it works for me. As far as what I wear, I figure that simple and solid is easier if you’re going to be mopping up a dirty street with your body all day. I don’t really see the point in getting overly fancy in regard to all that. But that’s just what feels right for me.

Dustin: How does environment play into your motivation to do a trick? What is your process for choosing spots to film?

Marc: For a long time, filming was something that was almost always an option while just out skating with friends on any given day. If a trick was working out on a particular day, I would ask one of my friends, usually Chris Avery or Matt Eversole, to film. I remember in the early days that we didn’t really go to spots just to get one certain thing. The situation was more a question of where we were all going to meet up. If something worked out at the spot, awesome. If not, then maybe I’d try it again the next time we ended up there. For me, the session was the environment. Wherever all the guys were going to meet was the environment. Just skating with the same guys all the time, and learning new stuff or finding new spots was pretty motivating. I never tried to pull off an aesthetic for spots I skated, and in more recent years I think I still tend not to exactly choose a certain place for a certain thing. I try to figure out the spot and see what comes out of that. 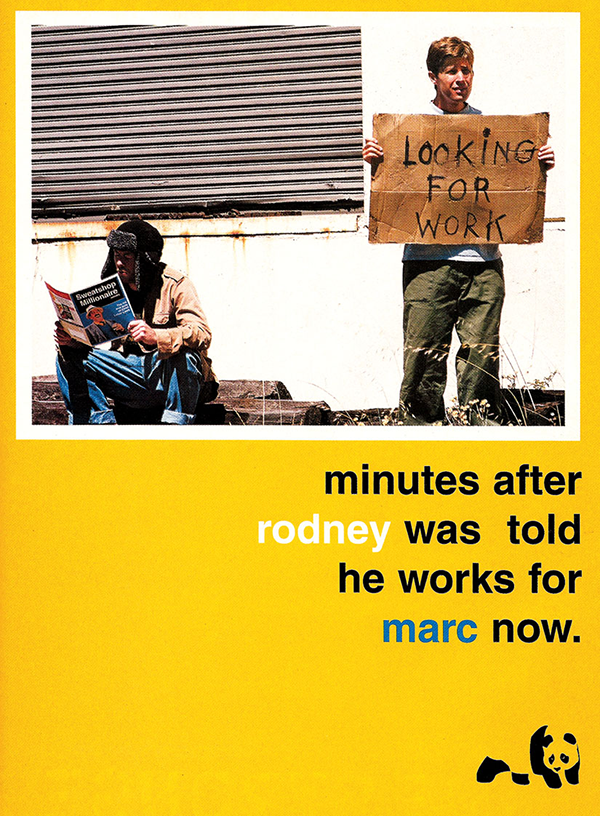 Dustin: When you first started to gain coverage in the mags, you had moved from North Carolina. What associations do you have with the East Coast, particularly where you lived in NC?

Marc: Everything stayed pretty local for the time I lived there. Driving to another city to skate for a day was a big deal for us back then. I just remember being out all day and all night just pushing around and skating a few different spots each day. Mostly curbs, manual, and flatground. The same stuff we’d see in videos. Back then, skating was definitely an outcast kind of subculture. And not many people skated at all anywhere you went. But we had a little posse that met up pretty much every day and made the rounds. It was good. Even if we didn’t end up skating, we would usually all be at someone’s house watching videos, or we’d be out getting into something crazy.

Dustin: How would you describe your current place in life as a skateboarder?

Marc: I’m happy doing what I do. And I’m thankful. It’s easy to forget about being thankful about everything, about your opportunities. I try to keep myself in check, and do what I know I should be doing. That’s the best way to describe it.

Dustin: Your career differs from the mainstream conception of a job, and in many important senses deviates from the popular understanding of what a professional skateboarder’s job is. When you meet people outside of skateboarding, do you find it difficult to relate your lifestyle to their’s?

Marc: Sometimes trying to explain my lifestyle can be difficult. If someone asks me what I do, what I tell them depends on whether or not I feel like answering the questions that usually follow “I’m a pro skateboarder.” With younger people, it’s easy because they do have that TV frame of reference. And it makes better sense to them, in lots of ways, than it does to a much older person that might have no idea what skateboarding is. To someone that I assume wouldn’t understand, I usually say something like, “I do some design work for a few companies in the LA area.” Which occasionally is, and has been, true. 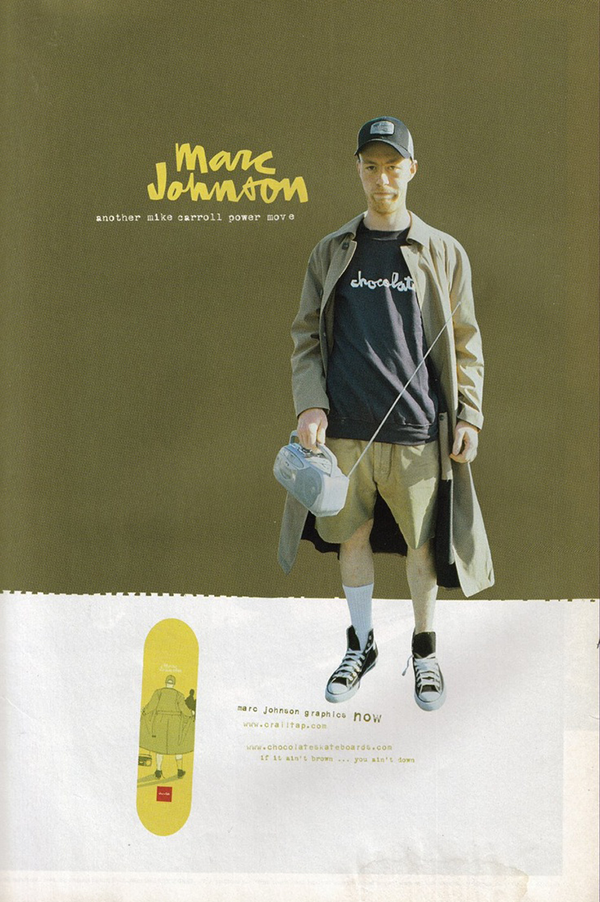 Dustin: Your transitions between companies have been notable. A-Team seemed almost like a re-imagined Plan B at the time with its scope and emphasis on pushing the trick envelope. What was that experience like? The personal chemistry on that team seemed interesting.

Marc: Switching from Maple to A-Team wasn’t a hard decision to make, but more an awkward one for me at the time. Going over to the World Industries camp during that period gave me the chance to work with the people that created the companies and the videos that really influenced the way I skated at the time. The brand itself, A-Team, seemed weird to me right from the beginning. It did always feel like they were trying to build a super team or something to that effect. Before that thing happened, though, Rodney offered to possibly work something out for Blind. When we talked a few months later and he asked me to be a part of something totally new, I jumped at the chance to help build something from the ground up. It seemed like a blank slate. But Steve already had an entire concept mapped out in his mind, which is what A-team turned out to be. Let’s just say that parts of it were weird. But I already had a good friendship with Gershon, and, of course, Mayhew from Maple. And Rodney was just awesome in so many different aspects. So the dynamic was fine. I think the problem was the lack of a solid direction. It seemed to me that A-team ended up being an avenue for some of us to later do projects that felt more natural to us individually. When I called Rodney to quit, it was actually really funny. We all quit pretty much the same week, but no one told anyone else they were going to quit.

Dustin: The more recent move to Chocolate and Lakai almost seemed to symbolize for you a break from the familiar towards a new realm of possibilities. Reflecting on the move, what were some of your hopes, and what goals have you achieved since?

Marc: I wouldn’t say that I applied any hopes to those decisions. Well, of course, I hoped I could bring something to the table for both companies. That always feels good if you can, right? Those companies were already established, and, of course, really solid. Double-checking almost every single decision someone made for Enjoi if I wasn’t standing directly over their shoulder got really old, really fast. I just knew that Rick, Mike, and Kelly all understood what things were like from both sides—being a rider and being involved from a business standpoint as well. As far as goals, I don’t know. I didn’t really set any goals. That sounds weird. Are we supposed to set goals in skateboarding? 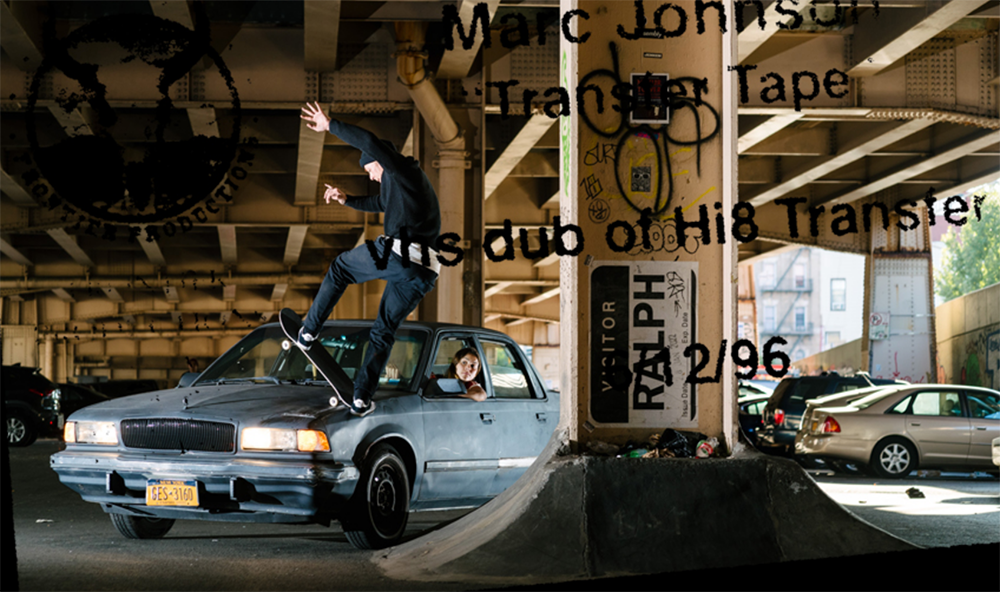 Dustin: As a final question, what avenues are you considering for your talents as you get older? What are some of your life goals not related to skating?

Marc: I was thinking about that recently. It made me wonder if I’ve done anything good in the past, aside from a good skateboard trick or something. I wonder if what I do or did in the past made anyone’s life better somehow. That’s a rough one. I guess basically the thought goes like, “Okay, so I’ve been skating for this many years, but do I have anything useful to offer outside of skateboarding? Have I learned anything practical in life aside from riding a skateboard? Do I have any value as a person off of my skateboard?” I feel shitty about the answers. But honestly, what can you say about being a pro skateboarder and not learning much aside from that? You’re almost constantly pulled in one direction or another by someone. You spend weeks here, days there, on the road a lot being wherever they need you to be so you can do the job you do. You don’t have large consecutive spaces of time to devote yourself to much else. I went to college for a few years, and it became impossible for me to balance that with tours, filming, and everything else. But I really enjoyed college. So who knows. I just want to skate for as long as skateboarding feels right for me.