Salt Lake City, Utah is a city completely controlled by religion and extreme weather conditions. It’s the last place I would have expected to find a thriving skate scene. One of the leaders and big influences in its movement is Mike Plumb, more commonly know as Lizard King. Everyone has heard of Lizard’s insanity. Believe me, he is just as crazy off a skateboard as he is on one. But there is a lot more to the man than meets the eye. We can definitely expect to hear a lot more from Mike in the coming years. Lizard is a legend in the making. – Jimmy Nelson

Jimmy: Where are you calling home right now?

Lizard: Pretty much LA right now, but I try to come back to Salt Lake every couple of months just to say what’s up to the homies.

Jimmy: Damn, isn’t it cold and snowy out there?

Lizard: Yeah, it’s freezing cold! Last time I was there I was so bored out of my fucking mind that we went out and made this snow bum in front of this gnarly parking lot gap and covered the snow and landing with plywood. It was so cold that I had to stop skating because my griptape froze and I couldn’t keep my feet on my board.

Jimmy: Who have you been skating with mostly?

Lizard: I’ve been mostly skating with all the Baker fools. I pretty much skate with Nuge everyday. That’s, like, my main homie. That dude’s the shit! He comes and picks me up everyday from Starbucks.

Jimmy: What about when you’re in SLC?

Lizard: Normally I skate with Adam Dyet. But Lately I’ve been going out and skating with the older cats, the tranny dudes like Ian Jones, Cowboy, Mark White, and that little Mexican midget Amador. Mainly because in the winter, I somehow never see the rest of the homies. It’s like I’m being boycotted or something.

Jimmy: I think everyone wants to know if you really picked up Pabst Blue Ribbon as one of your sponsors?

Lizard: I never called the girl back because I didn’t want to become a gnarly alcoholic. I’m already an alcoholic. They were going to give me so much beer that I was just going to be fucked.

Jimmy: How much were they going to send you?

Jimmy: So the Green Room is a phrase I hear a lot from you and a lot of the Utah homies. I don’t want to sound like a news reporter, but what exactly is it? 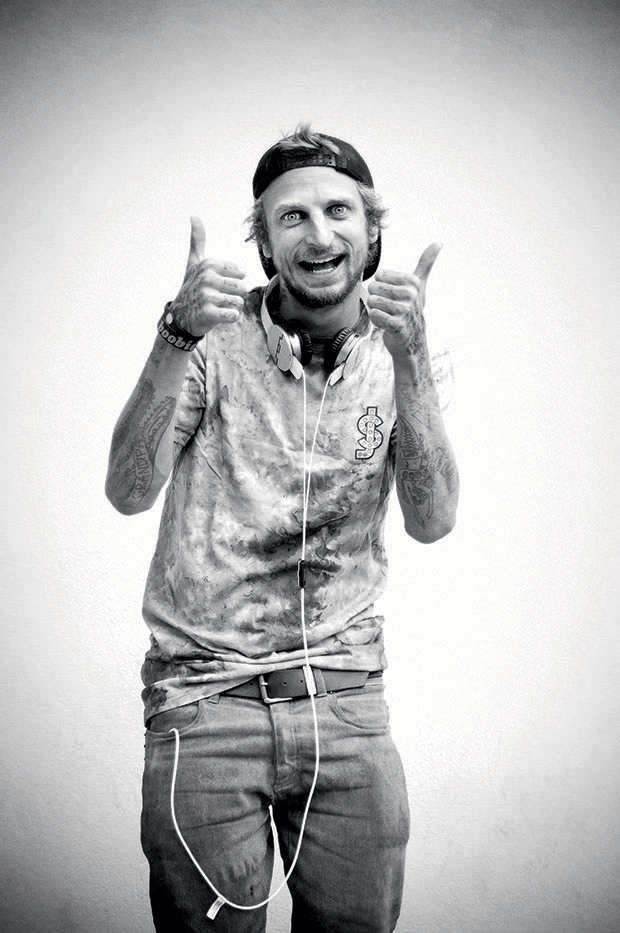 Lizard: It’s my gang fool, my skate gang. We started it at the Tampa Am the first year I went. It was me Baca, Slash, Ritchie Belton, and some other homies. But then when we got home it was Green Room everything. And we turned it into our gang. Anybody super official in the gang and are original as fuck have Green Room with a pot leaf tattooed on their ribs. Nuge got the first tattoo. He got it on his leg and then we made it a standard to get it on your ribs so he got another one on his ribs.

Jimmy: I was just with some of the lurkers from Salt Lake that came out to SF and they really tore shit up here. Who should we be looking forward to coming out of SLC? Who’s blowing up?

Jimmy: I’ve heard a lot about this video Random Lurkerz that you and Dyet are in. There have been three of them already?

Lizard: Yeah, I heard it might be coming to an end because Mark got a job with Dwindle. Random Lurkerz is the shit. It’s a posse that I used to kick it with and film with back in the Mutiny days, which was my original shit. Then shit died out and I started to hang out with this guy Mark White and we started filming. Random Lurkerz is just like we are cruising were random and we’re lurkin’. And then we just started making videos after that.

Jimmy: What was your first video part?

Lizard: My first part ever was in this video Serpent Head Nightmare Thing, but my first and only official video part was in Slaughterhouse.

Jimmy: Slaughterhouse was so sick. What is this I heard about you and Ragdoll in Las Vegas?

Lizard: I was with Rags and he smashed this case in a hotel and stole The Who’s guitar off this plastic wall mount. He ran out of the hotel, got into a cab, and we partied with it all night. The cab driver ratted us out. So when we got back to the hotel there were FBI and cops pounding on the door and Rags went to jail.

Jimmy: What was the transition like going from Pig to Think?

Lizard: It kind of sucked because all of my homies were on Pig. But they wouldn’t pay me any actual money so it was kind of like I needed to make money and not be a bum anymore. Which sucked because right when I quit I got the cover of Skateboarder on a Pig deck and didn’t get paid shit. Its all good, at least I got the cover. It made my mom cry, I knew she would like it.

Jimmy: So what’s the story with Think dropping you?

Lizard: I got kicked off because Tony Vitello can’t deal with the fact that he doesn’t do shit with Think and all he does is care about City. What are you going to do? He doesn’t put any money into the company. We haven’t gone on a trip in a year and a half. Fuck it, there’s no point in skating for the dude.

Jimmy: Where are you headed next?

Lizard: Now I’m going to go with this new company Reynolds is starting. I mostly skate with all of the Baker guys in LA, so it just made sense. It’s such a better move and a big opportunity. What do you do when Reynolds asks you to skate for a board company that he’s starting? You say yes, you can’t say no!

Jimmy: What have you been working on lately?

Lizard: I’m actually working on getting all my footage ready for this new Baker / Deathwish teaser.

Jimmy: What about the possibility of a Thrasher cover?

Lizard: Well, I hope I get it. I really want it. But I don’t know if I got it. They basically just told me I had an opportunity to a shoot a photo for it. So I did.

Jimmy: On an ender, what would you be doing if you never picked up a skateboard?

Lizard: Sitting in Salt Lake bummed out of my mind because my life fucking blows and I have a real job instead of being able to skate and have fun. I’ve never done anything but skate. Since I’ve had a skateboard, that’s all I’ve done. I’ve never thought of another option because there is no other option. I hope this shit lasts forever.