Lavar Mcbride is one of the best ever. Watch any of his old parts and you’ll see what I’m talking about. He’s been on the low for the past couple of years, but it appears that he’s been skating the entire time. Don’t call it a comeback, Lavar never went anywhere.

48 Blocks: You just came back to San Francisco, what have you been doing for the past couple of years?

Lavar: Basically, I just went to Chicago to film most of my part. I spent like two years in Chicago filming some footage from 2003 to 2005. After that, I went to New York to take a break. But I was also filming out there a little bit. I didn’t really get anything worth using as far as I see it, but I was in New York living the life.

48 Blocks: What part of New York were you staying in?

Lavar: I was Uptown, I was in Manhattan.

48 Blocks: What were you up to in NY besides skating?

Lavar: I was doing some music with my man Big Rush—shout out to Big Rush—keep doing your thing!

48 Blocks: Are you still skating for Affiliate?

Lavar: Yeah, I’m still skating for Affiliate. I’ve been riding for them for about seven years. Affiliate is like a family. It’s tight!

48 Blocks: So what’s up with your footage, is Affiliate gonna put it out?

Lavar: I don’t know, I’m just getting some footage so I can fall back on something.

48 Blocks: What brought you back to the West Coast?

Lavar: My family’s out here. So I just had to come back and chill with them. Plus, in New York I was doing it big. I had to get away from all that.

Lavar: I got back in August.

48 Blocks: You’re obviously still killing it, how much stuff do you have from the past few years?

Lavar: I’ve probably got about ten minutes worth of footage. It’s good footage too. Some of it is Pier 7 footage, but I look at that as being legendary because there was a time when you couldn’t skate Pier 7.

48 Blocks: Let’s rewind back to the Blind days, what was it like being a little kid on that company?

Lavar: It was cool. I was making a whole grip of money. I was going to school flashing and people were like “damn, how did you get all of this?” I would tell them that I was a professional skateboarder and they were like, “that’s cool, you’re getting free shit.”

48 Blocks: You’ve always been ahead of your time with skating. What goes through your mind when you’re thinking of a trick?

Lavar: I just think that there’s no way that you can’t do something. There’s always a possibility of it being alright. I just try to think of the best trick to do for myself and then I focus on landing it. Once I land it, I just land it.

48 Blocks: What’s the hardest trick for you personally that you’ve put down?

Lavar: That I ever did?

48 Blocks: Yeah, the toughest to you…

48 Blocks: Who are your favorite skaters?

Lavar: My favorite skaters right now would probably be my brother, Stevie, my boy Rodney in NY—he quit skating and got into music. But he’s got a dope-ass style. I like Ryan Hickey’s style. Harold, rest in peace. I like other people too like Koston and Enrique. Karl, Karl’s got a cool style. That dude James Craig is good too. I like his style.

48 Blocks: I heard you got some footage in the Rocco documentary, have you heard anything about that?

Lavar: Nah, it’s crazy cause I used to film a whole bunch of shit and Socrates would never use it. I wouldn’t be surprised if I had some footage in there.

48 Blocks: Let’s talk about Kids. How did you hook up with Larry Clark?

Lavar: I knew this guy named Harmony (Korine). Me and Harmony were cool because of Gary Smith—Geez. Me and Geez knew Harmony and he told us about this movie that he was writing and that he might want us in it. We had to talk to the director and all of that. One day we went down to Washington Square Park and dude is over there. I’m asking him if I can get in the movie. They were giving Nick Lockman this certain scene to do where he had to hit the dude in the face with the board. I was saying, “I could do that!” Just to be in the movie, but he wanted Nick to do it. Anyway, I ended up going to brunch with all of them and they told me they had a part for me and I had a part kissing on a girl and sitting on a couch talking about the stuff that I was talking about.

48 Blocks: Do people still recognize you from that?

48 Blocks: How often do you talk to your brother (Marcus McBride) these days?

Lavar: I just talked to my brother the other day, he’s doing good. He just got back from tour. He’s doing real good.

48 Blocks: Right now, what are your goals in skating?

Lavar: Just to get people to know who I am. A lot of people know who I am, but a lot of new skaters don’t. I’m trying to let them know who I am so I can just have that recognition again. Have people be like, “Oh yeah, that’s Lavar.”

48 Blocks: Everyone always talks about how fast you would learn tricks when you were little. When did you really start picking it up?

Lavar: I started picking it up when I was eleven. I had been skating for about three years. I had been skating since I was eight years old and I started getting good when I was about eleven. Once I started, I just stayed with it and watched videos. I’d slow-mo them and just watch them over and over. Then I developed my own style and didn’t have to watch anybody else. Once I got good, I was like, “Fuck it, I’m gonna start trying tricks.” Once I started trying tricks I would just stick with it and put my mind to it and it would just come to me and I would land it. 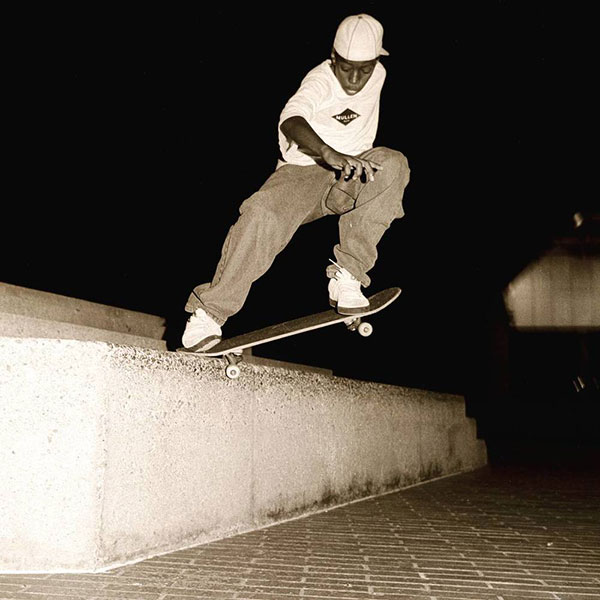 48 Blocks: You were on Stereo in the early days, how did you hook up with them?

Lavar: Stereo, that was because of Kareem. I was with Kareem one night when he was up here for the Back To The City contest. They had it right here at Civic Center. I was chillin’ with Kareem and he was telling me that he liked my style and wanted to get me on World. Then all of a sudden Kareem left World for a little bit and started his own company called Blue. Chris Pastras was doing Blue. So I linked up with those two. The next thing you know Blue turned into Stereo and they went under Deluxe.

48 Blocks: What brought you over to Blind?

Lavar: What brought me to Blind was Stereo had enough of my shit. I was a little bad-ass. They told me that they didn’t want me on the team anymore. I was like, “Aight, I ‘m gonna quit.” They thought about it and were like, “Well you’re good and you’re young—we still want you on the team.” I didn’t want to be on the team, so I quit. After I quit, Henry (Sanchez) had just got back from LA. He got me on Blind.

48 Blocks: When did you leave the World camp and what made you decide to leave?

Lavar: I didn’t really leave the World camp. I left Blind for Deca. After that things just kind of went downhill. Deca didn’t have money in its account and couldn’t pay me. They asked me if I wanted to be back on Blind. I didn’t want to be on Blind because of the image. So they were like, “We gotta let you go.”

48 Blocks: So out of SF, Chicago, and New York, which city are you feeling the most and why?

Lavar: I would say I’m feeling Frisco the most because this is where I’m from. Its got the best air. It’s a peninsula, so it’s surrounded by water.

48 Blocks: What advice would you give to kids coming up skating now?

Lavar: Stay focussed, don’t go too crazy cause you might kill yourself. (laughs) Nowadays these fools are jumping down ninety stairs. Remember, your body is fragile. Make sure you watch out and keep yourself safe.