“Silent but deadly” or “the beast from the East” would be examples of cliches that I would use to describe Joey Pepper. You’ve seen the Get Familiar part. You’ve heard about the move to Expedition. We rand into Pepper fresh off the plane from NY and set to move out there in two weeks and asked him the burning questions that we wanted to know before he set off on his next journey.

48 Blocks: What happened with Zoo, how and why did that end?
Joey: What happened with me? I don’t know… I don’t think it’s anything new. It’s what’s been going on over there for years.
48 Blocks: Contract’s up, see you later?
Joey: Yeah, my contract was up and that was it. I thought it was gonna get renewed, they kind of reassured me that it was gonna get renewed; but I shouldn’t have put so much faith in them. As soon as my contract was up, that was it… they just said, “later.” It didn’t come as a real surprise, I didn’t expect it to last very long anyways. Like everybody knows, every few years they just do a little house cleaning over there and try and buy themselves a new team and see if that will help their credibility, but all it does is hurt them every year. 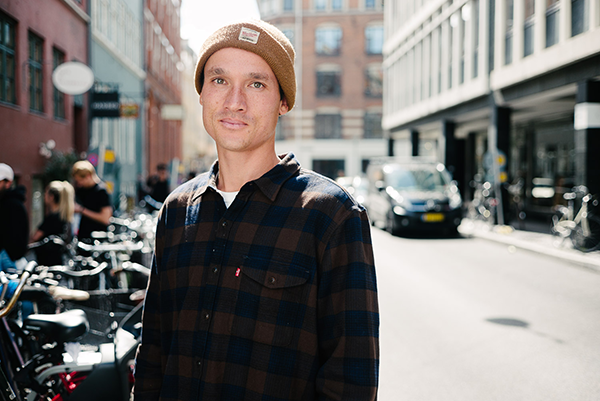 48 Blocks: So, I think around that time you moved from LA to SF. You were out getting coverage, but it seemed like you weren’t really tripping off getting a board sponsor. You were working for a little bit. What was going through your mind during that time?
Joey: Since my contract went up, I didn’t really… I mean I had a couple of offers; but more or less… it’s the story of the year, there’s not that many places to go. I’m not willing to go somewhere where I’m not truly gonna be happy. A lot of people will just jump on the first thing that comes along. I gotta think that “I gotta ride in the van with these people. I gotta ride these boards and try to be psyched.” I can’t skate good if it’s not something that I’m super psyched on, so I waited. I got a job and just lived the regular real-world life.
48 Blocks: You had surgery in there too right?
Joey: Nah, my surgery was when I was skating for Zoo York actually. That was something that was a long time coming. I’ve had real bad ankle problems my whole life. Surgery was something that I really needed to do. The whole Zoo thing was kind of a blessing in the end, cause every paycheck that I made for that two years I spent on my ankle. In the end it just made it so I could still skate. Now I’m healthy again, so I gotta thank them for that.
48 Blocks: You just had a part in Get Familiar. How’d that come about, how’d you hook up with Chris Hall? 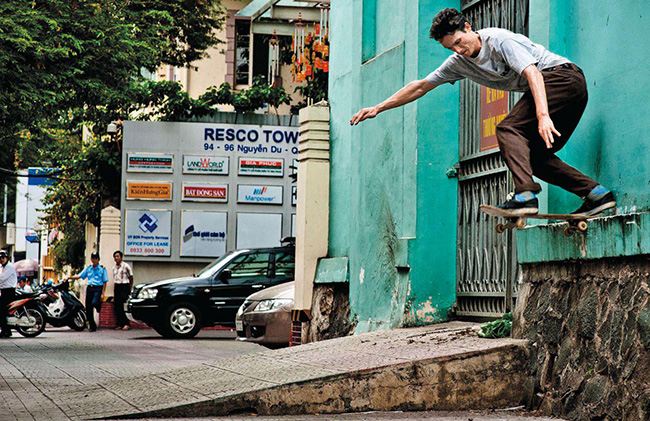 Joey: I’m psyched on that shit man! I talked to Chris when he first started doing that and he wanted to film some stuff, but that was right before my ankle surgery. I wanted to do it, but I wasn’t healthy enough to put out a good part at the time. Just before his deadline, I went online and saw his trailer and I got psyched on it. So I called him up and I asked him if I could send him like two or three tricks and he was like “yeah, you know…” like those dudes had been working on it real hard for a real long time. He wasn’t sure if he could give me anything just out of respect for everyone else. He didn’t know if there was enough room in it. I just called a few filmers and had them send shit to him thinking that I was only gonna get a couple tricks, then I went to the premier and I had a full part. I’m psyched, Chris hooked it up. Thanks Chris.
48 Blocks: Do you have a lot of footage left over from Zoo?
Joey:Yeah, during the time I was filming with Zoo; I just went on tons of trips. The footage stacked up, that’s how I filmed that part for Get Familiar. It was just stuff that I had over the course of a couple of years. I still got some stuff. I still actually got a lot of stuff left over that I’m gonna try and use for the Kayo Platinum Edition video.
48 Blocks: Alright, since we got on the subject of Kayo… you’re riding for Expedition now, it was a shocker to a lot of people when it was announced. How did that go down?
Joey:I actually called them up when I first stopped skating for Zoo. I was talking to Richard about it. It was an idea, but everybody was kind of busy doing there own thing and kind of lost contact. Then just before Christmas, Chany hit me up and told me that him and this other dude over at Kayo, Matt, they were just sitting around talking about what they could do with the team… and my name and Welsh’s name came up. They hit me up and I said, “yeah, I’m down to do it… I’d like to get Rob in the mix too.” Then they called him and he said the same thing… he would do it if I did it and vice versa. So yeah, it’s something I’m super psyched on man! It’s what I’ve been waiting for. It’s something that’s solid, it’s a team that I’m psyched on… the dudes rip, it’s small. It’s the closest thing that I can think of to something like Aesthetics, it has the same feel. 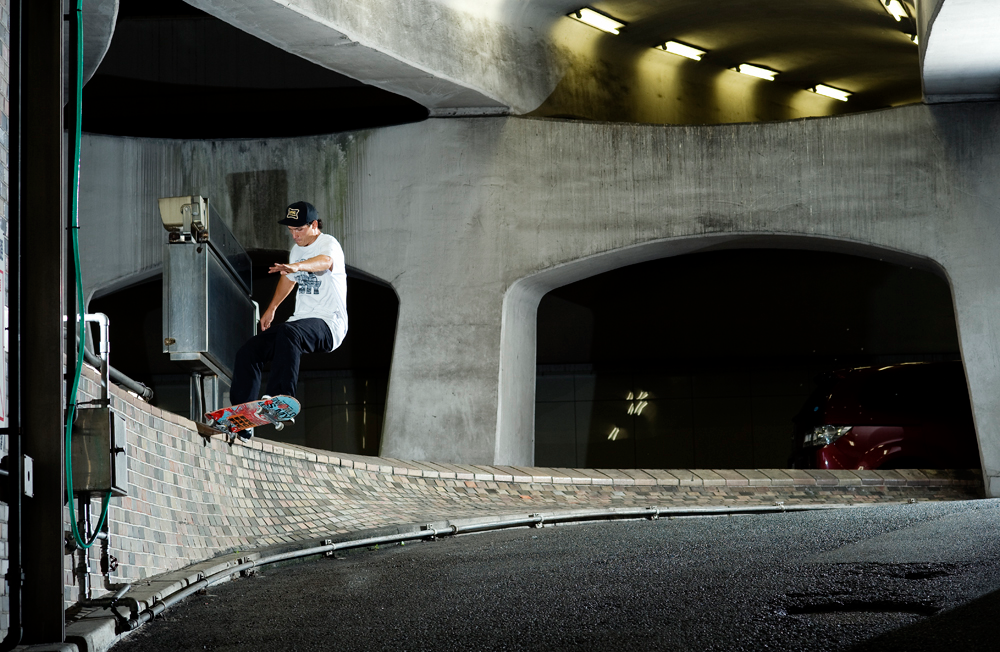 48 Blocks: Yeah, it’s got that vibe. So you and Rob have been riding for the same companies for quite some time and are obviously homies. How did you guys first meet up?
Joey:I met that dude in Main. I don’t know if that’s a good thing or a bad thing (laughs) nah it’s sick. I met Rob when I was a teenager in Main, I used to drive down to Portland to skate and that’s where he’s from. I used to drive down like an hour or so to skate. I was like a weekend warrior, I’d just go down there and shred. I’d see him down there all the time and ended up linking up with him out here.
48 Blocks: So, you would say that he’s one of the main dudes that you like to skate with?
Joey:Oh yeah, for sure… Rob’s been my boy from day one, we push each other; not in like a competitive way more like in a bad way. (laughs) You always gotta have that person around, someone to fuck with, someone to fuck with you. Makes it so you don’t take yourself so seriously all the time. We definitely don’t take anything seriously.
48 Blocks: What’s up with this New York move?
Joey:Yeah, I’m in SF right now…I just flew out here last night. In two weeks I’m driving back. I just wanna get back East. I made the full circle, I went from Boston to LA to SF now I’m back on the East Coast again. 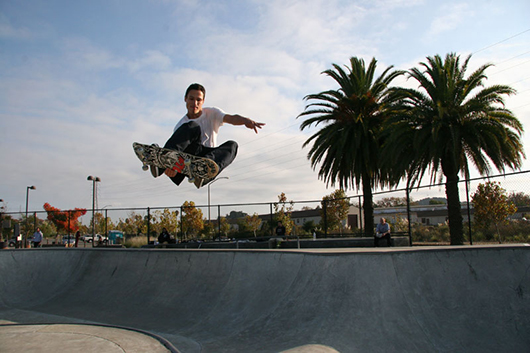 48 Blocks: Do you think you’ll be out East permanently?
Joey:Nothing’s permanent.
48 Blocks: What part of the city are you gonna stay in?
Joey:Right now I’m living in Brooklyn, East Williamsburg—Williamsburg or Bedstuy, I don’t know which it is.
48 Blocks: Back on the subject of Expedition, are you guys gonna be having any input… is anything gonna be happening over there since you guys are on the team?
Joey:Yeah, for sure… it’s definitely more of a hands-on approach. That’s one of the things that sucked working with Zoo over the years. It’s a pain in the ass, you have an idea or somebody else has an idea and you wanna get it through to someone… by the time it gets to the higher ups it’s either ass backwards and it’s not quite what you wanted or the message doesn’t even get there at all. This thing with Expedition, they’re encouraging us to have input on everything. It’s real small, so anything we wanna do we can do.
48 Blocks: That’s tight, so when’s that Kayo Platinum gonna be out?
Joey:I think that’s gonna be towards the middle of the summer. 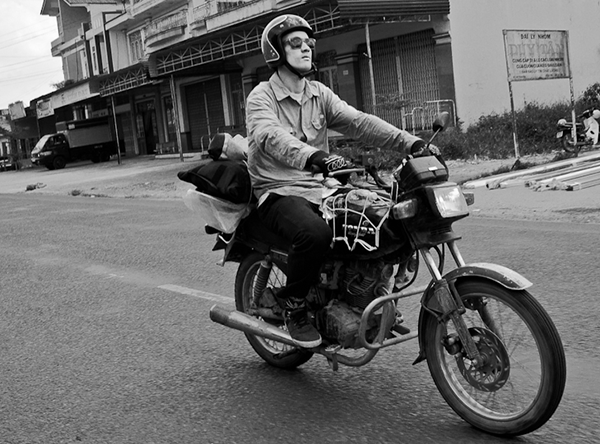 48 Blocks: What have you been skating lately? I know out here you were skating a lot of tranny.
Joey:Yeah man, I’m an old dog (laughs). Yeah, it seems like these days when I’m out here, the park is the easiest thing to go to. It’s something that you can skate all day… so when I wake up, I usually call up Nikhil, Matt Jones, Brad, all the homies and just go hit a park and do it all day long, no hassles or nothing. The parks out here are so good now, you can just learn shit… you can skate street too, whenever you want.
48 Blocks: Tight, any last words for the kids?
Joey: For the kids? (laughs)
48 Blocks: 48 Blocks is for the children.
Joey: For the children, take your costumes off and stop taking yourself so seriously.