Once upon a time I went to an early Zoo York demo in Maryland or Virginia, can’t remember which one. I came there expecting to see some crazy skateboarding —which I did—but what still stands out in my mind from that day is Harold, Pang, Pepe, and a bunch of DC locals in a feverish dice game in the corner. That memory sort of embodies that era for me. It was care free, undefined, and a little reckless. Jeff Pang was a force to be reckoned with back then. Today, he’s older and wiser. But he definitely hasn’t lost his edge.

Steven: How do you feel about New York and the East Coast being so popular right now in skateboarding?

Jeff: As the world becomes a smaller place, skate spots are blown up overnight thanks to the Internet. It was a long time coming for New York City, because back in the old days of media you had your magazines, a few videos, and word of mouth. I am happy that our city is usually on skaters top ten for destinations. But sometimes, every now and then, a fucking asshole shows up. And you wish it was back to the way it was. I definitely have East Coast pride. But I am particular to the Northeast because of the obstacles everyone has to deal with. Back in the day, there were not that many indoor skateparks. And you can’t just go outside and skate all year round. Kids have to go out there and skate with three pairs of socks and two pairs of pants in the winter. They don’t even think twice about it. Now, old farts like me are asking the younger guys, “You’re skating in this cold weather?” When I forget that I was doing the same exact thing every single day. The epicenter of the skateboard industry has and will probably always be based in California. It just happened to migrate from San Francisco down to Los Angeles.

Steven: What is your fondest memory of those early NYC days? 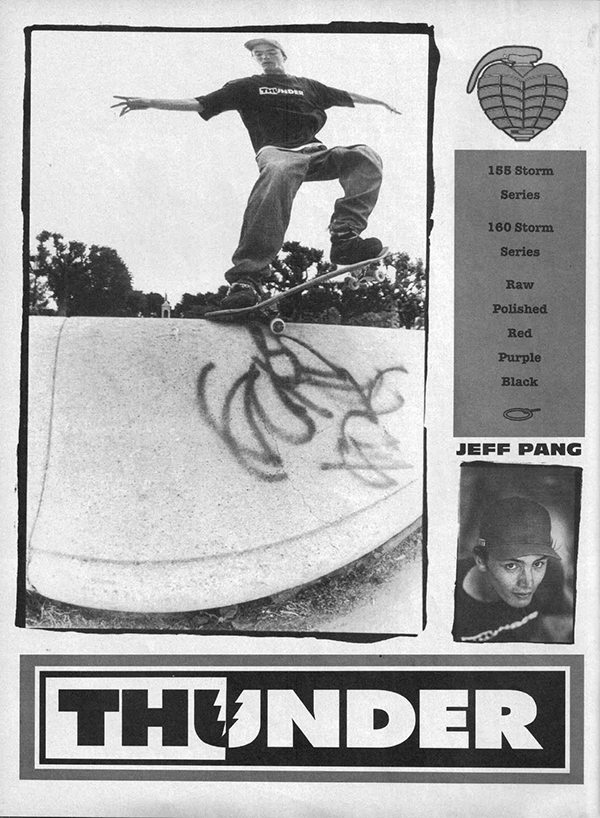 Jeff: I would have to say that my fondest memory is the camaraderie that we had at the Brooklyn Banks. Every weekend we would congregate there, people from every borough, New Jersey, Massachusetts, Rhode Island, Connecticut, Pennsylvania, Delaware, Maryland, Virginia, DC, and even further. During those days, you would know just about every skateboarder in NYC and the surrounding 500 miles. We would all meet up under the Brooklyn Bridge, skate for a few hours, and then break off into separate groups to go session the various parts of the city. Almost every memorable day of skating started out at the Brooklyn Banks.

Steven: Can you talk a little bit about the Underworld Element days?

Jeff: Underworld Element is a great memory because Andy Howell was the first professional skateboarder that I had ever met besides my guru Jeremy Henderson. When Andy started the company, he flew me down to the Atlanta to meet the rest of the guys. I had the opportunity to meet my idol, Julian Stranger, Rick Ibaseta, and Chris Hall. We got to travel for a few weeks becoming close friends. It was basically a dream come true. And I had planned to not pursue skateboarding after SHUT had gone under.

Steven: It seems like nowadays skateboarding in general is viewed as more as a career path than the era in which you came up. What are your thoughts on the change in mentality?

Jeff: It is unfortunate that with the popularity of skateboarding nowadays, it attracts participants that do not have the same passion about being a skateboarder that we did back in the day. I know I’ve said this a thousand times, but there was nothing cool about being a skater back then. And there was little financial gain, fame, or girls to be had. I’m sure that those people digging out in San Francisco felt they were pioneers, but once they found gold everybody wanted a piece of the action. People were not digging holes for fun, those motherfuckers were looking to get paid. So in that sense, I guess you could say these kids are mining. Don’t get me wrong, I’m not saying you could ever get a better feeling than being on a skateboard from anything else. I am just trying to justify the reason why every Joey and Johnny are riding skateboards instead of trying out for the football team. Thank you Joey and Johnny, without you I wouldn’t have a career in the industry.

Steven: In another interview you alluded to the fact that people move from wherever they’re from in the world come to New York City, and then a month later act like they are from there. Would you care to elaborate on that?

Jeff: Okay Steve, so you’re trying to get me fired up? I prefer to not go into detail about people or situations. Just like anybody that gets under your skin, you want to have nothing to do with them. It doesn’t matter if they are from your neighborhood or from Mars. No matter what they say or skate it bothers you. Of course, everybody wants to claim a place like New York City. Shit, I was born in Northern Ireland. I couldn’t even name a street in Derry. All I know is New York City from about 10 months old. Perhaps I am one of those bastards floating in the limbo of no homeland. But I bet every skateboarder that’s really from New York City is holding it down for Jefferson Pang, just like I’m holding it down for everyone that has moved here and isn’t a kook. A few that I’m proud are living here are Zered, Rohan, Pepper, Williams, Cairo (when he was here), the list goes on and on.

Steven: What’s been the most drastic lifestyle change for you since becoming a husband and father?

Jeff: Moving out of Max Fish after drinking there since I was 16. That’s a 20 year run, on and off. I still go back for a beer every eight or so months. I love that place even for just 30 minutes. I cherish most, the time I spend with my family and closest friends that all happen to be skateboarders anyway. No more street brawls. I buy a lot of cheaper beer.

Steven: If there was one single thing you could do differently in your pro skating career, what would it be?

Steven: What’s the biggest difference between Jeff pang now and Jeff Pang at 21. And if you could talk to the 21-year-old Jeff Pang what would you say to him?

Jeff: The most obvious difference is that I am older and heavier than that 21-year-old kid. I might still be able to ollie just as high, but he was able to skate without liquid yoga back then. I would tell him to keep his optimistic outlook on life, and everything is going to be just fine! Don’t yell at Harold anymore. And don’t listen to Dave Ortiz when he is drunk. Bet everyone you know that the 44th President of the United States would be a black man! I would tell me to play 5-14-16-29-53 on the Powerball 7 on Wednesday, December 25, 2002, to win a $314.9 million jackpot or split it with the actual winner. Shit man, I don’t know?

Steven: If you had a free afternoon tomorrow and you were going out to skate, where would you go?

Jeff: To a warm warehouse with smooth flat, a ledge, the Little Brooklyn Banks minus the cracks, fence, weeds, and artificial turf. Basically, anywhere with my close friends. It really doesn’t matter.

Jeff: Wish I had backside noseblunt slides. Harold had that one. I love to do basic flat, ollie stuff, and just roll. 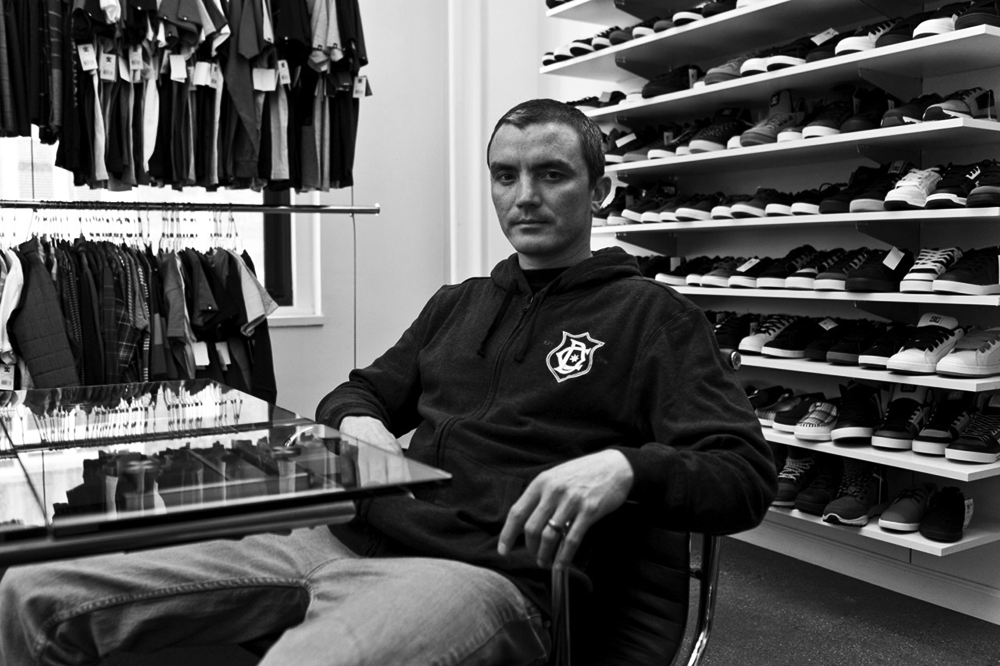 Steven: What do you think you’ll be remembered for in skateboarding other than photos and video parts?

Jeff: I guess I used to get into fights a bit, but not really with skaters. I wore some giant mustard yellow pants on the cover of Thrasher. I hope to god that people didn’t associate mustard yellow balloon pants with Pang. I have had the same haircut for most of 20 years. I have consistently been running the buzz cut forever man. Now that I have grays, this cut is a great way to keep me looking young. I don’t even know what my hair would do if I let it grow out. I just learned I could grow a mustached last November because DC does an annual fundraiser for prostate cancer research called Movember.