Watching JB Gillet skate Pier 7 and Union Square in San Francisco back in the 90’s was a real treat. The dude was always ahead of his time. JB has a certain precision to his skateboarding that sets him apart from most people at a typical session. And he’s always had that. Nowadays, we enjoy watching his skating in Cliché videos, and can’t wait for his Lakai part. Brad Johnson jumps into the world skate journalism with a good with one of his old friends.

Brad: I heard you own a skate shop called Ballz Out, how’s that doing and where the hell is my box?
JB: It’s been open for one year now. It’s growing slowly, but in the right direction. My homies Nico & Soufiène are taking care of it most of the time – new shirts are coming soon, then your box is on the way for sure roacho!
Brad: Tell us about the first time you came to SF. Who’d you skate with, where’d you skate, was it hard not knowing that much English at the time?

JB: The first time ever was in 96 I think. I came from France with my friend Malik for one month, I was 16. Back in Lyon we met Dave, a skater from SF that came to Lyon for school, and his mom was still living in SF. He told us we could get a room at his mom’s house. It was right when the EMB became a bust, everybody was skating Wallenberg. We were tripping on seeing all the spots that we’d been watching in videos for years. We were skating Wallenberg a lot, everybody was skating there – Drake Jones, Sheffey, Jovontae, Chico, Ben Sanchez, Carroll, Karl Watson… it was sick! I remember Malik told me “it look likes you skate hella slow compared to those dudes!” haha. SF spots were rough and people didn’t like to wax them that much. You had to skate fast there if you wanted to grind or slide. We didn’t really speak English though and I guess back then skating was less worldwide than now, so the skaters weren’t really used to seeing people from France coming just to skate SF, but everybody was cool too us… at least it looked like that cause we didn’t really speak English so it was hard to talk to people. Sheffey told us to come by his crib cause he wanted to give me some Girl boards. I was psyched! We went looking for his crib and couldn’t really find it. Then some lady saw us skating and looking around and asked us ” who you looking for?” we told her “Sean Sheffey’s apartment” she said “it’s right there, I know him. I’m Rick Ibaseta’s mom, he’s my son’s friend.” I remember Jovontae opened the door and we were trying to explain to him “Sean Sheffey, boards, Girl skateboard, give me” in our broken English! Then they hooked me up a box, that was cool. Thanks again! I went back to France, I was psyched on skating and SF so a month after I got back I quit / got kicked out of school. Then I went back to SF later on with two other friends for three months and started going back and forth for the next few years, spending more time there than in France.
Brad: How did the nickname Roach come about? I sort of remember, but refresh us. Was it from the Makavelli album? “You still breathin’, fuckin’ roaches!” haha

JB: Roach! I guess you gave it to me fucking roach! People used Frenchie. I bought the Makavelli tape the day it came out, and then 2pac was my English teacher. I was calling everybody a roach just playing around. Tony Montana helped me a little bit too. All you guys too –people at Pier 7, you, and Lee were English teachers. The thing is I thought it was regular English, so I didn’t know some words were curse words or slangs, so i was speaking a Pier 7 / Toni Montana/ 2pac remixed English with a French accent to everyone, even to friend’s moms or older people that I’m used to speaking to more respectfully – it was the same for everyone! I had to learn a new english when I went to LA, the first time was in Orange County too – people didn’t understand when I was saying hella or some other slang words.
Brad: Any crazy stories from your trips to SF?
JB: Too many funny stories, the first year we were always staying downtown in some crazy cheap hotels – crackheads everywhere, hookers all over! I think it was Jones / O’farell / Geary… all those streets were crazy. I think it’s different now though? Then we were staying with you for awhile at 48th Ave, taking the N Judah to go downtown. It was tight, house parties were fun too, riding those bmx’s all over the city,but fuck those mushrooms – I ain’t taking that shit no more! That shit was fun but it’s too psychedelic for me, I ain’t a hippie maaan! ahaha. The house looked like a psychiatric hospital, everybody was tweaking hard! Enrique watching the Adams Family while playing it backwards and fast fastforward too as well, thinking it was the best movie ever! Us going to the beach thinking we found a pirate boat and it was just a piece of wood. I even thought I could read a cat’s mind when I was looking in his eyes… daaaamn! ahaha. I think those times are some of my best memories for sure!
Brad: When was the last time you were in the States and are you ever gonna make it back? 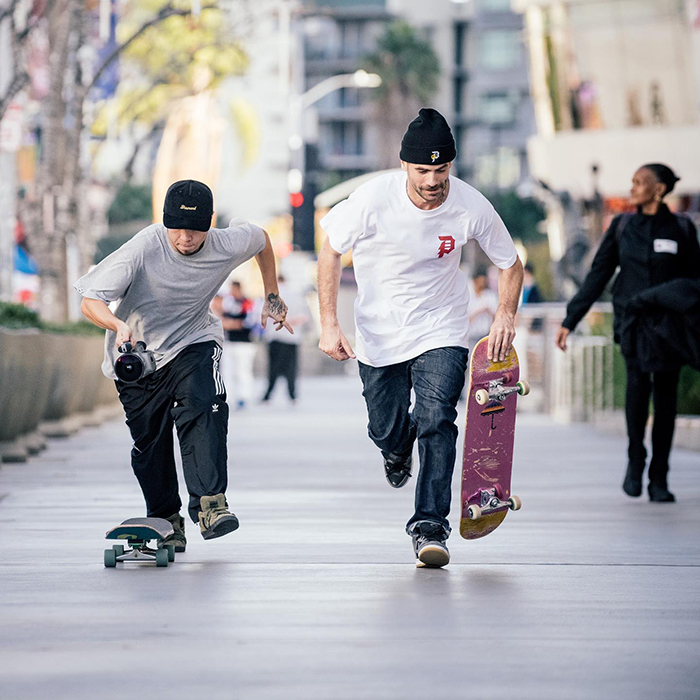 JB: Last time I was in the States was the December 30th 2002 I think. I was coming to SF from Lyon with a girl, she was going to stay there for six months to study and I was getting a place with her and staying 2 or 3 months since I just had a tourist visa. Well, I stopped in NY at JFK to go through immigration and I didn’t get through. They asked me questions, took me to a room, asked more questions on what I’ve been doing all those years going back and forth, they told me that I over stayed the 90 day tourist visa two times – each time by only three or four days. I didn’t even know! So the officer walked me back to the plane and sent me back where I came from. A very nice New Years eve – walking home in the snow, fucking roaches! I just got a visa sorted out, so I should be able to come back; I’m psyched!
Brad: Give us a rundown on your sponsors starting from the beginning.
JB: I was on Etnies first, then New deal, Alien Workshop flow, World Industries, Matix, DC shoes flow, Deca, Axion footwear, then I had an opportunity with Chocolate, I got on. A week later, I had a call from Daewon (he was kind of in charge of Deca) and he was with everybody from the team, Enrique, Shiloh – I kind of got influenced, Marcus was back on Deca too, Lavar got on… so I went back and turned pro. But I think I fucked up! ahahah. It’s all good though, Deca was sick, I liked it – fun times! Then I skated for a shoe company named Link, it was through Cliché. Nowadays it’s Lakai, Cliché, Matix, Gold Wheels, Ballz Out, and Nixon. 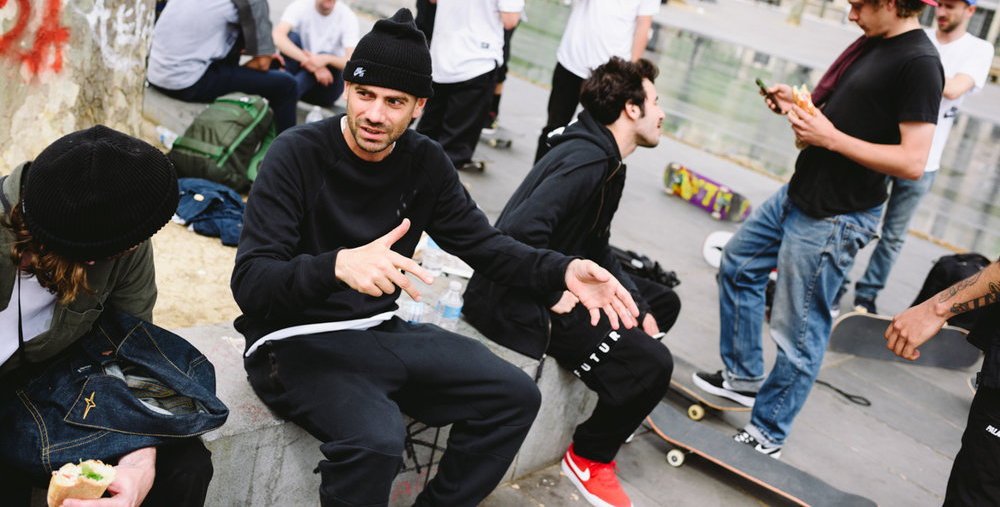 Brad: Besides the Lakai video, are you working on any other projects?
JB: Yeah, a Cliché video.
Brad: What does your day consist of when your at home in France?
JB: Depends some days, usually I get up at 9:00, drink a lot of Moroccan mint tea, go to the shop around 10:00, then go skate around 2:00, go back to the crib or chill outside, then I go sleep around 2:00 AM.
Brad: Thanks homie for your time, I might see you out in Europe this summer, let’s skate roach, it’s been a while. Any shout outs? Now’s the time.
JB: Tell me when you come, we’ll meet for sure and roach around! I’ll come back to SF too, hopefully. Thanks to a lot of people in SF and LA, Brad Johnson, Ben, Serge, the Russians twins, Karl Watson, Lee smith, Lavar & Marcus McBride, Jason Wussler, Chef Pierre, Bobcat, Shelby, Twan, Pat Washington, Kent at FTC, Stevie, big thanks to Chico for letting me stay at his crib in LA, Carroll and Tony Ferguson, the N-Judah night-bus, Daewon, Shiloh, Kareem, Enrique Lorenzo, Socrates, Fernando, Chris Roberts, Robbie McKinley, Fabian Alomar, Steven Cales, Tony (team manager at Deca), Julio De La Cruz, some girls, Chris Roberts, Kelly Bird, Rudy Johnson, Matt Milligan, Clyde Singleton, Tony Hawk, SAD, Eli, Lenny Kirk, Henry Sanchez, Rodney Mullen, Nick Tershay, Ty Evans, Rick Howard, Flo, Brett Margaritis, Jermie Daclin, Nick Lockman… My mom and dad, my family, all my friends… sorry for the ones I forgot to name or forgot the name – everyone at Lakai, Matix, Cliché, Gold, Ballzout… Jan at Nixon, everyone that let me stay and there crib and roach on their couch!