Jamie Thomas has been many things throughout his career. A pro for some of skateboarding’s most iconic brands and the founder of Zero skateboards are at the top of the list. Having his business written up in the The New York Times and getting to be a video game character are also boxes that Jamie has checked off. With those highs came the inevitable lows. He dismantled Black Box distribution roughly five years ago. Zero was moved to Dwindle, and subsequently returned to Jamie a few years later. Fallen Footwear did not survive the shuffle. Jamie’s shoe company that was responsible for Ride The Sky [2008]—one of the most celebrated skate videos of all time—ceased production in 2016. Through it all, Jamie persevered.

Given his experiences, podcasting seems like a natural progression. Jamie has certainly “been there and done that.” But the title of podcast host had eluded his resume up until June when he introduced Thrill of It All with a memorable debut episode that featured Chad Muska. Jamie’s new project aims to tell inspirational stories through conversations with various guests. It’s a tried-and-true formula that’s worked for the best of them since talk shows were invented. But not even the best have lived the life that Jamie Thomas has. And that’s reflected in his personal insights that are sprinkled throughout this new series.

Being someone that’s been on the receiving end of countless interviews throughout his career, you would think that podcasting would come easy for the Chief. Not true. Jamie admits that the learning curve was steep when he jumped in the deep end with both feet. But we all know that Jamie is a swimmer. He’s the type of guy that does lemon-water cleanses for 30 days at a time, and travels to the ends of the earth with only a backpack and skateboard. Jamie is applying the same tenacity to podcasting that he does to his life. In fact, he says that he’s currently putting about 20 percent of his time into it. And when the Chief puts his mind to something, Leaps of Faith get jumped.

Where he’s going with it all is in the direction of a long-running series that’s ultimately going to feature an array of voices from both in and out of skating, telling stories that have inspired one of the most inspirational pro skaters of our generation. And that’s as cool as any of the brands Jamie has created or fronted during his twenty-five year tenure in the industry.

What made you decide to venture into the realm of podcasting?

JAMIE THOMAS: I feel like Instagram is a decent method of sharing what you’re into and have been through. But it’s not a place for anything over a few sentences. There’s very few people that want to read that much on Instagram. I really wanted to try and work on some platform that allowed for getting into much more storytelling. There’s a ton of stories out there. And every person’s story is what makes them unique. I felt like there are a few people touching on the podcast world, but I had a slightly different approach, and was just really interested in exploring this new format of storytelling.  I have a lot of relationships and know a lot of people who have stories that I’m fascinated by. And I know a lot of other people would be fascinated by their stories too. There were so many things in alignment that it just encouraged me to want to do it.

What was the learning curve like? You’ve done hundreds of interviews. What was it like being on the other side asking the questions?

I listened to a lot of podcasts and imagined what it would be like interviewing someone. But when I jumped right in and started, it didn’t feel natural at all. I felt like I wanted to share—but it wasn’t time for me to share. It was really hard to change my perspective from interviewee to interviewer. Because of that, I wanted the first few to look more like conversations. But because everyone is so used to a certain format of video, I got a lot of heat for talking too much, interrupting, and taking too much air time. When I watched it, I kind of felt the same. I don’t think that they were wrong.

“I’m into self improvement. And I’m constantly pushing myself. I wanted to find individuals that were like that.”

I had this idea that they would be conversations. And I would share these conversations with the world. And they’d be these intimate conversations with someone that I admired and respected. I thought it would be really cool. But it didn’t make sense in a conversational form. So then, I gradually worked my way into a more interview-based format as the episodes went on. Me being the host, my job is to validate the reason why I’m interviewing them. And then, let my questions be the part that shows what I think is fascinating about each person.

My job is just to draw out those fascinating elements. So I’m working on it. But it’s definitely a work in progress. Bobby [Hundreds]’s is only the eighth episode. I’m really new to this. 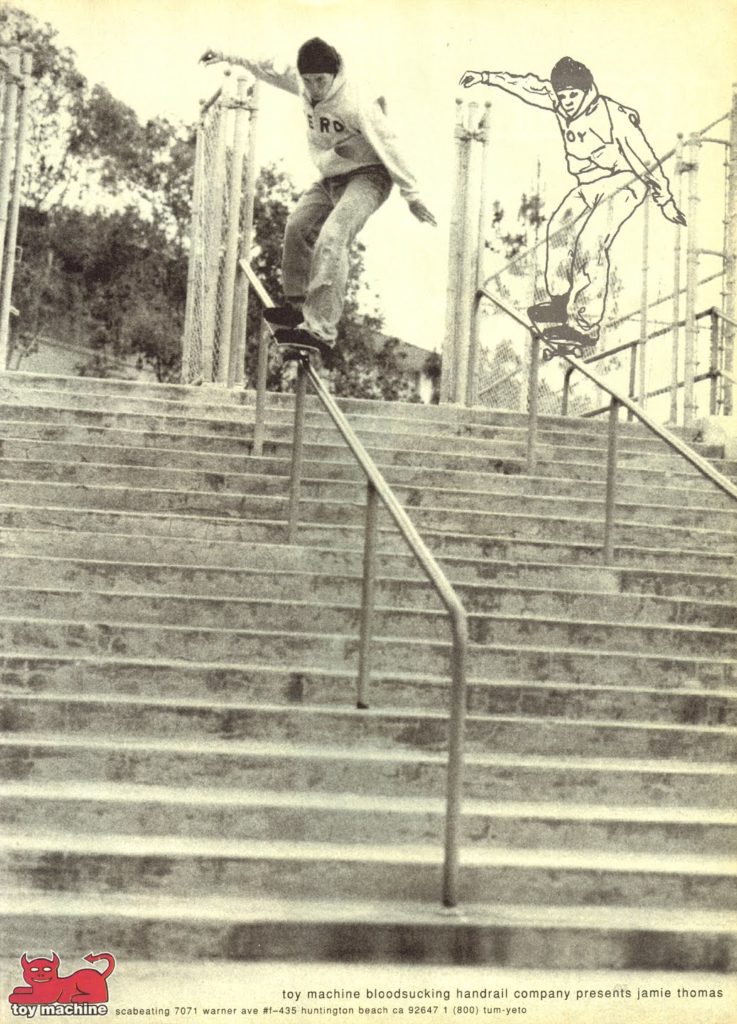 I know that the common thread with your podcast is inspirational stories, and that you’re building it out by season. How did you go about picking the people for this initial round. Is there any rhyme or reason to why they were selected?

There definitely is. I kind of see it as me being like a DJ. I’m playing to the crowd. As a DJ, you play the things that you know they’re going to like. You also play some things that you like that you want to introduce them to. I feel like my go to audience is skateboarders. But I gradually want to explore conversations with people outside of skateboarding. In the first season, there’s a few people that are in a parallel universes to skateboarding because I wanted to start introducing people to that idea.

It’s a good balance of skateboarders. I’m bouncing around between different eras and relationships that I have with those people. Some are close relationships like Muska and Ed Templeton. We go really way back. We’ve had hundreds of phone calls where we’ve explored all sorts of topics. Then, I kind of wanted to go into a few business-related ones like Huf and Bobby that were a little bit about their upbringing, but more about how they made their mark in business.

It’s basically the things that people find interesting, or the reason people follow me, is because I’m a skateboarder. I run a company. I’m into self-improvement. And I’m constantly pushing myself. I wanted to find individuals that were like that, but did it in different facets of their lives. Hopefully that translates to my audience because there are similarities.

With all the businesses and brands, and still being an active pro skater, how high on the totem pole of priorities is podcasting for you right now?

It’s pretty high right now. I have someone film them and do rough edits. But I’m doing the final edits, and gathering all of the assets that we use in the videos to give context to them. I don’t have a partner in it. I’m doing a lot of heavy lifting in this first season. That’s going to have to change in order for me to continue on with this. But because I’m doing so much, I’m really involved with it. It’s taking up 20 percent of my time right now. It’s a pretty big priority just because I’ve told people when they’re going to come out. I just have to make it happen.

For the first five episodes, I stayed up through the night finishing the video versions. That’s a pretty big commitment to do five episodes in a row on no sleep. It really comes down to me having a lot of things going on in my life and adding a podcast to it. I already run a business. I’m still actively skating. And I’m an ambassador for several brands. I have a lot of responsibility. I have three kids. To put a podcast on top of that is pretty gnarly.

But I think that we grow the most when we really push ourselves and struggle. So I feel like I’m growing. And there’s a lot of introspective thoughts and views that I’m getting of myself. I feel like that’s inciting the most growth.

“I think that we grow the most when we really push ourselves and struggle.”

One of the more interesting things to me about Thrill of It All is the T-shirt collaborations that you do with the guests. Do you see yourself turning it into a brand at some point?

I’m making those t-shirts to celebrate people’s careers for the core listeners. It’s a small thing. It’s like 50 to 100 shirts. I’m only making those for the guests that have had photographs or images pertaining to their life that really make sense. I don’t really see turning it into a brand. All of the things that we discuss in the podcast, a lot of it has heavy nostalgia for people. I feel like now that the information is all in one interview—my hope is that I can ask the right questions so the pieces will be in the right place for someone like Ray Barbee. I want to give you that good feeling that you got when you watched Public Domain (1988) or Ban This (1989), and let you hear the stories behind the scenes of it all. Then, there’s a T-shirt that can remind you of those stories and those times. I just want to make a really cool shirt for the people that are nostalgic about that person. It will remind them of the interview, but also of all of the things that make them feel warm and fuzzy about someone like Ray. That’s the goal. And I think it’s kind of working. I get one of each of the shirts and I’ve been wearing them all of the time. I’m stoked that I have these really cool photo T-shirts that represent that person, and the collaboration of conversation that we shared together.

If you had access to anyone that you wanted as a guest for your podcast, who would it be and why?

Right now, the holy grail interview is Ian Mackaye from Fugazi and Minor Threat. That’s mainly because he had such a major impact on my life as a kid growing up. I was drinking, smoking weed, and doing whatever as a young kid. I was very angry and found that music. All of Ian’s music was very inspirational to me. And he’s always been a very inspirational person. I would love to interview him someday. But right now, calling anybody that I don’t know and already have a rapport with feels kind of weird. I look forward to being confident enough to do that. And I plan to for Season 2. I want to go out of my comfort zone. But right now, I’m talking with people that I’ve already had in-depth conversations with. I know what I want to ask them. And I’m generally curious about more. But at the same time, I have a pretty decent comfort level with them. But yeah, I think Ian Mackaye is it right now. It’s kind of like anything. You set a goal. Then, when you finally reach that goal, you set new goals for yourself.

Originally Published on The Hundreds