Jahmal Williams is an artist both on and off his skateboard. Whether the medium is a canvas or the streets, he utilizes strong lines to create breathtaking images. Jahmal’s aesthetic is embodied in his brand, Hopps. We caught up with Jahmal to talk about his history, and how that’s influencing his current project.

Keir:  What do you think some of the connections between hip hop and skateboarding are?

Jahmal: Some of the connections between skateboarding and hip hop are the street lifestyle, and DIY creative mentality.  I know a lot of skaters come from broken homes, and negative situations. Skateboarding has been an escape or outlet for them.  In hip hop, you have individuals coming out of poverty and oppression, and creating something out of nothing. I feel in skating and in hip hop, you have to really own what you’re doing and feel passionate about it. Most of my references to hip hop are coming from a ’90s perspective. I think that’s when skating and hip hop had the strongest link. 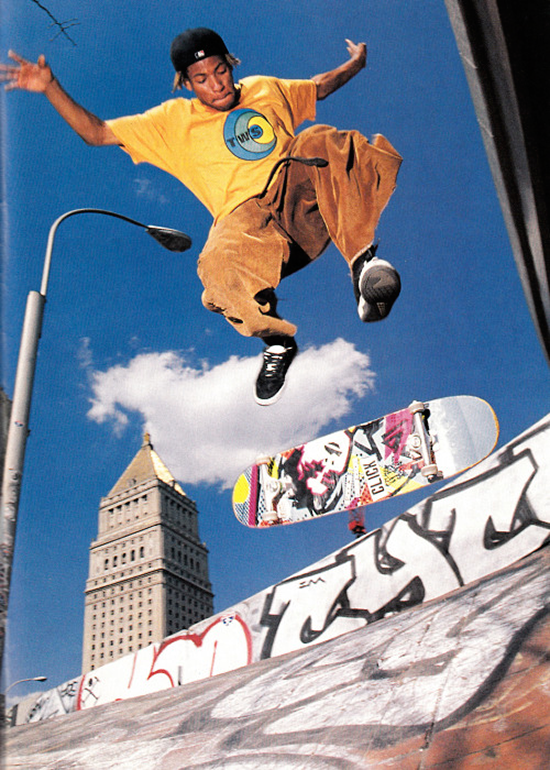 Keir: Who are some people that have inspired you?

Jahmal: Mike Vallely and Ed Templeton inspired me a lot in my youth. They gave me a chance to travel the world skateboarding. Together, they had just started a new company called TV Skateboards, and put me on. That was huge for me,  especially coming from the hoods of Boston.  They would rip every demo—no matter how bad the course was—and hang out with the kids, and sign autographs.  They are always just real professionals.

Kareem Campbell was one of the first black skateboarders that I had seen that made skateboarding look like playing basketball!  I know it sounds crazy. But his style, power, finesse, and control were like no other. When I got a chance to meet him, it was so rad. He was real cool to me.  He made me feel proud to be a black skateboarder.  He was really from the hood!  Straight up, and he always had that swagger.

When I met Alyasha Owerka-Moore, he had just gotten me on American Dream Inc. That company was one of my favorite companies that I’ve ever ridden for.  Ali and Ron Allen had put this company together, and it was truly revolutionary in style, graphics, and the team. During that time, in the mid ’90s, it was radical to have a skateboarding team that consisted of mostly Asians and African Americans, at least I thought. Ali was so creative and ahead of his time with fashion and designing. It was so dope too, because he was really into music and was down with a lot of hip hop artists. He was always so up on music.  He was not one-dimensional.

Keir: What are your favorite memories of Boston skating?

Jahmal: The best times in Boston to me were hanging out down at Copley Square back in the day.  It was the best skate spot!  Copley had ledges, manny pads, stairs, and gaps. It was kind of like our own little EMB. All the heads would meet up down there to skate all day and night.  And it wasn’t like just anybody could get down either, heads would get vibed. Funny shit would happen all the time.  We would sneak into movie theaters after skating. Back then, skaters weren’t cool. So we would have to sneak into the clubs, plus we didn’t have any money. We were straight up reckless youth out to have a lot of fun.

One time, I was skating with Panama Dan, and we were getting pulled up Newbury Street by this delivery truck. Panama decided to grab the back of the flat bed truck while I stayed rolling on my board peeking down at the trucks light signals on the sides.  I noticed that the truck wasn’t taking a turn where we thought it would. The truck started hauling ass to the on-ramp of the Mass Pike highway.  I let go, but Panama stayed on.  I was like, “Oh shit!”  The truck started going like 40 miles an hour.  I thought he was going to be staying on until he got to the pay toll then somehow walk back. He didn’t!  He jumped off, as soon as his feet hit the ground he tumbled like 5 times. He got up and picked up his board and started laughing with the biggest grin on his face while running up the on ramp of the highway, true commando style! 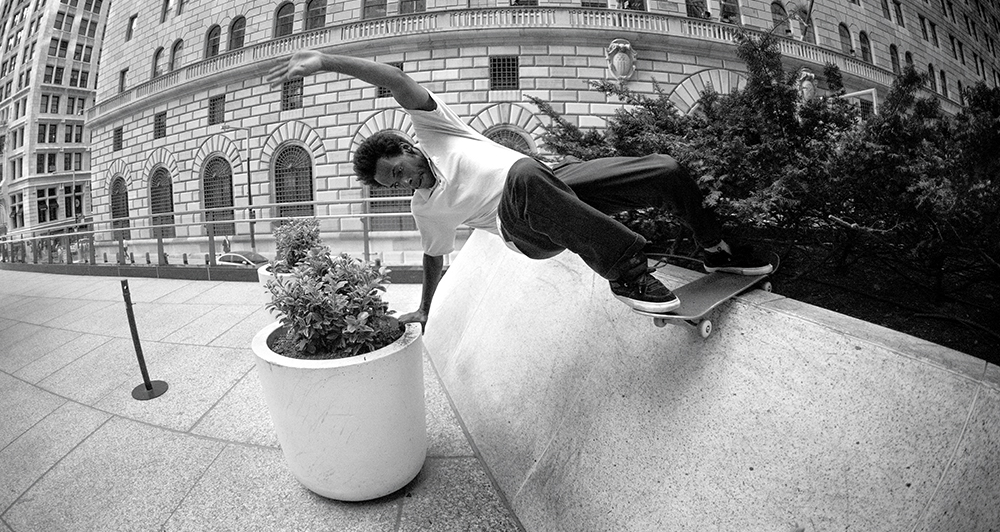 Keir: After growing up in Boston, you spent some time living in Florida.

Jahmal: I moved to Miami because of the skate scene, this girl that I was seeing at the time, and the amazing weather.  You could skate all year round, like in California, but it was the East Coast!  At the time, I was riding for a few companies and got really frustrated about why I was skateboarding and for whom. I was skating a lot. But I wasn’t happy. I needed to step back from the industry stuff.  It was a great way to realize why I started skateboarding in the first place. I started to have more fun again, like when I was 14.  But at the same time I had to get a nine-to-five job to support myself.  It was a strange transition. But it was good for me.  I couldn’t skate every day due to work. But I leaned to not take my time for granted. Miami is so beautiful. It’s an awesome place to live, and it’s very relaxing.  My stress was very minimal when I lived there.  I hung out with the MIA family most of the time. I watched Ed Selego and Chris Williams build up MIA Skate Shop from nothing to being one of the premiere skate shops on the East Coast. 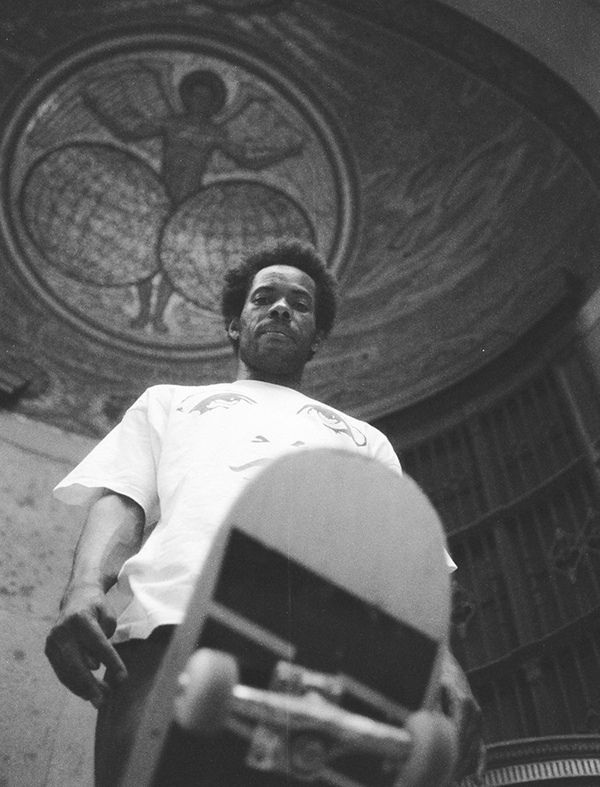 Keir: Where has skateboarding taken you during your pro career?

Jahmal: Traveling is one of the best things about being a sponsored skater.  Having someone else take care of all your travel arrangements, and paying the tab is the best. Some of the best places that I’ve been to are Barcelona—before heads knew about it—and Tokyo were very dope!  Also, traveling around Europe was a rad experience because you didn’t have to travel long before the culture and language shifted.

Keir: It’s been a little while now that you’ve been doing Hopps, we have seen some rad graphics and that new art series.  What has it been like lately, what are some of the hard parts and cool parts of doing in?

Jahmal: Hopps is coming along,  mostly on the East Coast.  It’s been growing organically at its own pace. I’m really thankful for all the support that skaters and shops have been showing Hopps. In the beginning, doing the company by myself was really tough. It’s taken a lot of dedication and persistence to get where I’m at with it. I’m learning now how to ask for help from others. Things get a bit stressful at times. I’m also learning how to do one thing at a time, graphics, budgets, filming, and more. The best part is always just skating, by far!  This is the first business that I’ve ever started. And as far as the hardest part, the business end can be intimidating, it’s all a learning process.

Jahmal: To learn more about the business, it’s a constant. To continue to skate and have fun, and try to put together a Hopps crew and to continue on with forward movement!