Western Edition has some of the strongest art direction in skateboarding. This is due to the work of Ian Johnson. His drawing skills, knowledge of skateboarding, and love of jazz combine to give the brand a flavor of his own. We recently stopped by the Western Edition office to chat with Ian and take a peek behind the curtain.

48 Blocks: How did Western Edition start and who was the orginal team?
Ian: Western Edition started in 1999 when I came back from college. I dropped out and was working at FTC and had a couple of graphic ideas and told Kent that I wanted to do a skateboard company. He had already been thinking about doing a company, so it just kind of worked out. He had the name from back in the day, it was a snowboard company first, then I changed it. That’s how it started. The original team was Bart Fonseca Jones and Alex Klein, they were the first two dudes.
48 Blocks: What was the hardest thing about starting a skateboard company from scratch?
Ian: The hard part, I didn’t deal with. I think the hard part is the money and Kent paid the money, so I didn’t think it was hard at all to be honest with you. (laughs) Definitely getting the money together and then getting shops and distributors. It’s a consuming process, I mean we’re still dealing with getting that official.
48 Blocks: Do you have any regrets about anything involving Western from it’s start to now. Is there anything that if you could do it over you would do differently?
Ian Ummmnnn yeah, there’s a lot of things that I would like to have not done and or done. Originally it was just supposed to be only amatuers. It was supposed to be like a Fun (old skateboard company) steeze and then help kids in the city get sponsored by bigger people by helping them get exposure. That kinda didn’t pan out cause when I went to New York he turned hella people pro and put Brad (Johnson) and Jason (Wussler) on. I’m stoked on where we’re at now, but originally it wasn’t supposed to be this big.

48 Blocks: Give me a brief timeline of the history of Western Edition and how it has developed since its start.
Ian: Like I said, ’99 was the start. We had Bart and Alex first. Pat Washington got on shortly after that, and he was our first pro. Then Brad Johnson and Jason Wussler joined the team. Wait, who else was on back then?
48 Blocks: Nikhil Thayer?
Ian: Yeah, Nikhil got on after those dudes; then Bart got clipped.
48 Blocks: Nick Lockman was the team manager for awhile…
Ian: Nick was the team manager during the first video Did It. He kinda put that video together. Then Nick left, we got Lex. Dude, this is hard…I gotta write this shit down.
48 Blocks: Who is the current Western team and what is one word that describes each member?
Ian: Pat, Smooth. Brad, Suave (laughs). Nihkil, Consistant. Kellen James, Aristocrat (laughs). John Igei, Precision. Leks Barris, Canadian (laughs). Dwayne, GANGSTA (laughs). Zizou, Tech. Toweda, Super Tech.
48 Blocks: Who does your wood?
Ian: Watson
Ian: The name wasn’t my name, Kent had it or whatever. The shit I had, I tried to figure out how to relate it to the name and it was pretty obvious. Pretty much the history of the neighborhood, Western Addition, being the Harlem of the West. It was a big time jazz mecca back in the days, in the like the 50’s and 40’s…which was kind of what I was drawing anyway, so that related. Other than that it’s just city images and things the riders are into… I try to put some of that into it a little bit. The main things are the city and the history of the neighborhood.
48 Blocks: Do you feel that Western gets enough attention from the mainstream skate media?
Ian: No but that’s kinda everybody’s fault, you can’t really blame people for not giving you a shot. You have to create your own chances and to an extent I don’t think everybody does it. I think riders can always do more and we can always do more. It’s definitely harder being a small company and not affiliated with anybody with big spending power to force your shit to be seen through advertising. If you have big money involved with it, things just fall into place easier.
48 Blocks: Do you feel like things are paying off from where it started to where it’s progressed to now?
Ian: You Know, there’s a lot of ups and downs. I just think that now it’s getting to the point where it should be. Everybody involved is actually giving a fuck and trying to do it. At any given time somebody wouldn’t care, there were times when I didn’t care that much, and I was like “I gotta make a catalog…” or whatever and wasn’t into it. Sometimes the riders aren’t into it or whatever. Now it seems like we have better communication and people are more psyched on it. I think that shows to other people. Hopefully that’s the way it’s gone and that’s good, I feel good about it. I feel better about it now than I have since it started.
48 Blocks: What inspires the Western graphics and image? 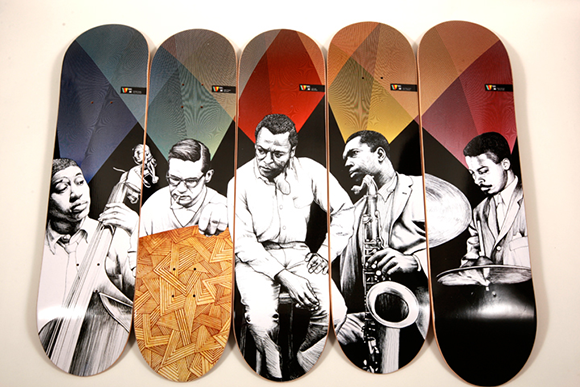 48 Blocks: How did you start skating?
Ian: How did I start skating? I think I snowboarded first in like 91, then I got a Transworld skateboard magazine and it had like Frank Hirata on the cover or some shit and I bought a set-up from CCS. I met this kid in my town that skated and he showed me Questionable and that’s the first video that I watched. That’s kind of what I look at for what I like to this day, it’s all based off Questionable and old Plan B stuff
48 Blocks: Do you still skate, if so how often?
Ian: Yeah, I still skate a couple times a week. I mean I don’t shralp it up hardcore, but I still skate kinda seriously at least once a week. But you know, shit happens. The older you get the harder it gets to go out, obviously. You get hurt and you don’t want to skate for like a month. But yeah, about once a week I guess… on average.
48 Blocks: What outside interests do you have other than doing the company, skating, and art?
Ian: I’m into football aka soccer. I watch the English league all the time. I get up at like six in the morning to watch Arsenal play. I don’t know why, I just do it. I’m pretty into that shit. I like to read. I like to listen to music and try to educate myself about jazz more. As I get older, it’s like I’m into it, but more getting into why I’m into things and the depth of what I’m into… becoming more educated about shit like that. That’s about it.
48 Blocks: What’s next for Western, 2007 is coming up what do you have planned – tours, power moves?
Ian: Nah, I mean kind of like just doing the same thing. I mean if we sell a lot more stuff, which I hope we do; not a lot will change. We’ll keep trying to do the shit we wanna do. Hopefully everybody keeps skating. Theres a lot of new kids on the team that people may not be familiar with. I hope they’re stoked on them cause we’re stoked on them. Dwayne, Kellen, Toweda in Japan is off the hook. All those guys, I’m really psyched about the future. If we can just keep going and see those dudes in like five years being pro… that would be really cool, so I hope that happens.
48 Blocks: Any closing comments that you wanna say to wrap this up?
Ian: Just because a girl’s picture looks cute on myspace don’t mean that she’s cute or really a girl.