Comic relief, a lot of style, and good bag of tricks are things that describe German Nieves. He’s a super cool and creative dude. So when he mentioned that he checks the site regularly, it was a no-brainer to arrange an interview. It was a group effort, but we made it happen thanks to the help of Nikhil Thayer. Welcome to the Block, Germ.

Nikhil: Give us a few vital sats to start off with. Name? Age? Sponsors?
German: My name is German Nieves and I don’t think people care about my age. I have a couple of sponsors who I’m so greatful for: DC, LRG, Autobahn, and Division East skate shop. They all take care of me real well. Thanks for keepin’ me lookin’ so fly.
Nikhil: Where are you living right now? 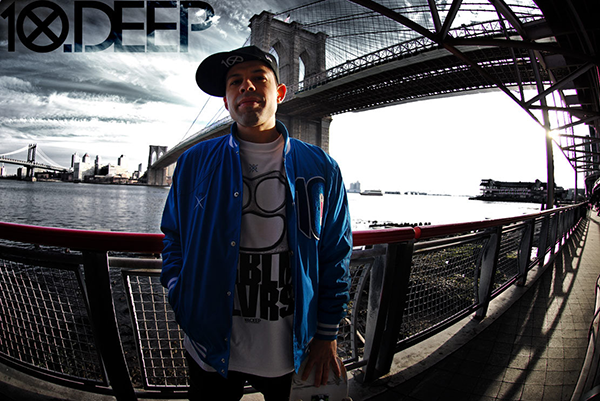 German: I live in New Jersey where it’s freezing balls right now. Other than the brutally cold winters it’s pretty dope. I live twenty minutes from Manhattan and forty minutes from the beach. There’s skate spots all over Jerz . Don’t sleep on Jersey, the houses have furnished basements.

Nikhil: You have seen skating go through a lot of stages. Was there a favorite era for you?
German: There’s been a few memorable times. When I first moved to Philly in like 2002. Skating Love Park was an amazing time for me, shit was just so much fun. The summers in New york when Astor Place was poppin’. I’d say like ’98 or somethin’, so many heads would post up at that spot and so much shit was goin’ on in that area. It was a good time in skateboarding.
Nikhil: One time you told me someone pissed you off when they asked you why you were still trying to film and take photos and you said “I’m just doing what I’ve always done.” Do you want to elaborate on that?
German: Whoever said that was probably mad that my life wasn’t as miserable as their life. I just been doin’what I always been doin’. Whatevs, I’m not a hater. I shoulda said “oh you mad cause I’m stylin’ on you!” 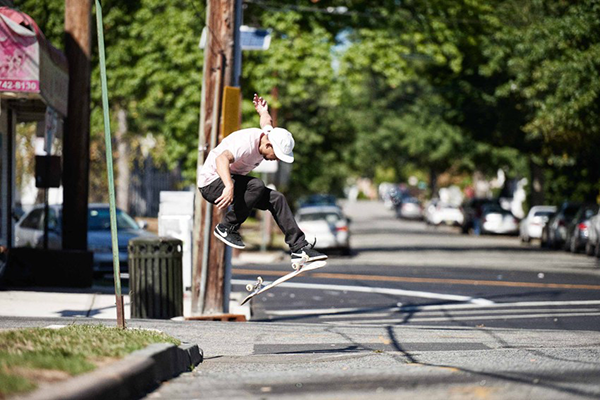 Nikhil: Skateboarding seems to be either loved or hated by the mainstream. Which do you prefer? Or does it even matter?
German: I like it when people are facinated by it. It just makes me that much more psyched on what I’m doing. Haters are just ignorant, they aren’t really doing much of anything for themselves. I just block out all the bullshit.
Nikhil: Do you know more Dipset or Misfits lyrics?
German: I been listening to the Misfits way before Dipset was around. The Misfits music is timeless and they’re from Jersey; but I do listen to a lot of Dipset shit. I definitely know all the Misfits songs.
Nikhil: If you had to listen to either Jim Jones or Matt Jones for the rest of you life who would it be?
German: Haha, thats a tough one. Matt’s pretty “emo” but Jim Jones got some flows. Jim seems kinda ill yo’. “Ballin.”
Nikhil: Who do you hang out and skate with in SF and can we expect some footy of you in the WE vid? 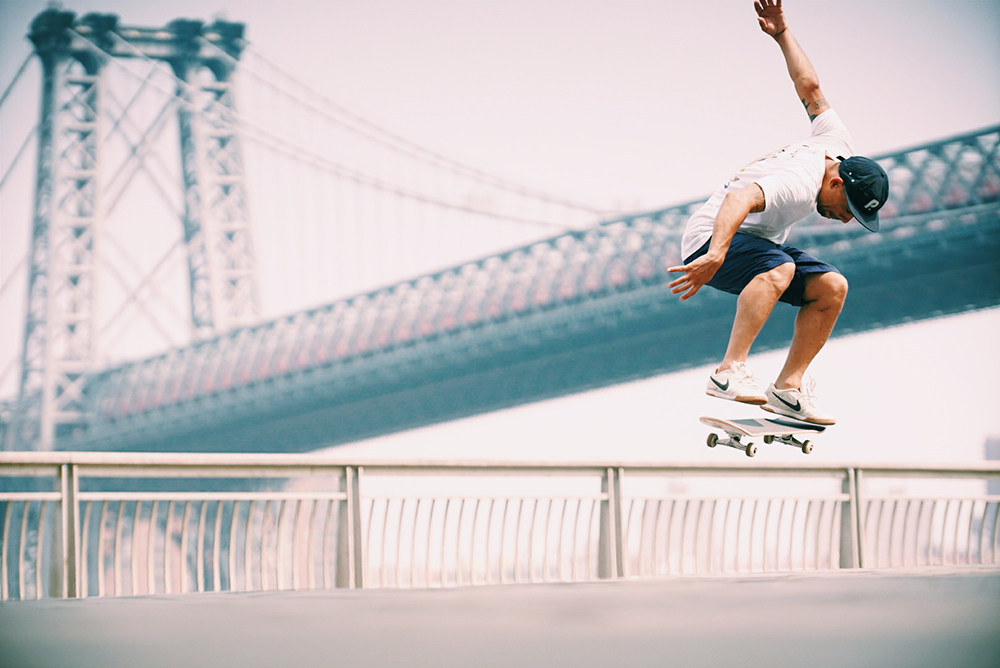 German: I skate with you, Matt Jones, Igei, Joey Pepper, Brad, Jake Jones, you know the crew you guys are my westside connection. We got the illest crew in the Bay Errrrrrea (I love sayin’ that). It’s all good vibes when we skate. Games of skate get real intense, mad fun times yo! Hopefully I’ll have some stuff in the Western video, you know I gotta rep with my friends in Frisco. I’m just psyched to skate with dudes that are into the skating that I’m into – straight steezy, flavorfull street skating. Western Edition reps that. To be down with ya’ll in the vid is dope. WORD!
Nikhil: Tell us a little about why you keep coming back to SF?

German: SF is dope, I just like the feel of the city, you know. It has that raw vibe. Kinda like where I’m from. It’s not freezing like the East Coast weather in the winter, it’s perfect for skating. I like skating with you guys. Oh and where else can you get HYPHY at?
Nikhil: Tell us a little about growing up skating in NJ/NY and skating there now? Do you still skate with Bobby Puleo and Andy Bautista?
German: Well me and my friend Brian Macko met Andy skating Weaselbrook park back in the day. Andy had a ramp in his yard and we would skate that. He was real good on his ramp. It was like two quarters and we skated it like a halfpipe. He always wore this batman hat, shit was funny. Then Bobby started coming around a couple of years after that in his blue chevy nova. That thing was a beater. He would bring us to skate spots with us three in the front seat, cause the thing would drag in the back. Those dudes are amazing individuals. I still skate with Andy all the time. Bobby lives in Brooklyn. He be on the low. I haven’t skated with him lately, but it’s good times when all three of us go skate. 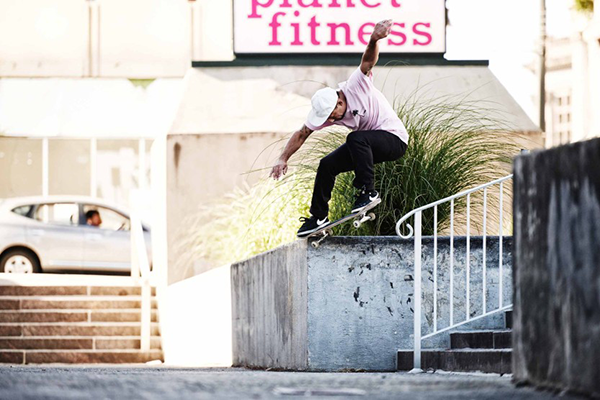 Nikhil: Why can you do such good frontside airs?
German: Thanks homie, I like trying to blast ollies on miniramp cause I’m not really good at lip tricks. So I just try to huck a big ass ollie. Frontside indy grabs was somthin’ I tried and it just feels dope. Thats that Rican hesh shit.
Nikhil: You are a really positive person. How do you maintain that type of outlook?
German: I just try to surround myself with good people and stay happy. Life’s great. Shit I’m out here skatin’ with good friends.
Nikhil: OK, now hate on something/someone.
German: Man I dunno what to hate on. I’ll hate on my jeans. These shits are holdin’ my legs from that bangin’ ass tre’ flip I got. haha. 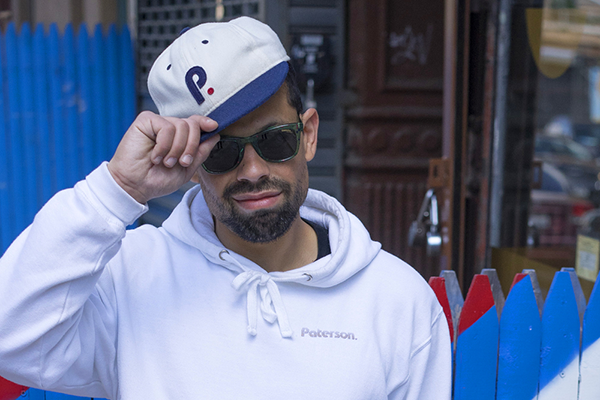 Nikhil: Top five songs.
German: Lloyd Banks -“Warrior” that joint is a banga. Justin timberlake – “My Love,” Thin lizzy “Cold Sweat,” RBL “Don’t Gimme No Bamma Weed,” The Lox – “Fuck You.” That’s just shit I been psyched on lately. It’s hard to break down five songs. I was just thinking how funny that name Fatal Hussien is, that’s some lox shit.
Nikhil: I know you are in school. What are you studying?
German: I go to school for graphic design. I was going to the Art Institute in Philly but I just had to take a little break. I had too much going on, but I’m going back in February to school in NY, it’s cool, design is part of my lifestyle. I’m into things that look good. So I’m just learning how to make things look good and get paid at it.
Nikhil: Any last words?
German: Hi mom!