We got to steal a bit of Chris Pastras’s time right before the doors were opened for what ended up being an amazing 15-year celebration of Stereo. We talked about all things Stereo. They’ve got a rich history and bright future ahead of them.

48 Blocks: What’s been going on with Stereo since you guys went independent?
Chris: It was a lot of work getting restarted, we took on production and sales. We never had to deal with either of those things before. It’s been a challenge, but in the end the pay off has been great. It’s great to be in control of our own destiny and not have to wait on other people. It’s going amazing, we’re working on a new video and the team managed to stay intact. That was a pleasant surprise for me.
48 Blocks: You’re in charge of the art direction at Stereo, what artists are you currently working with? 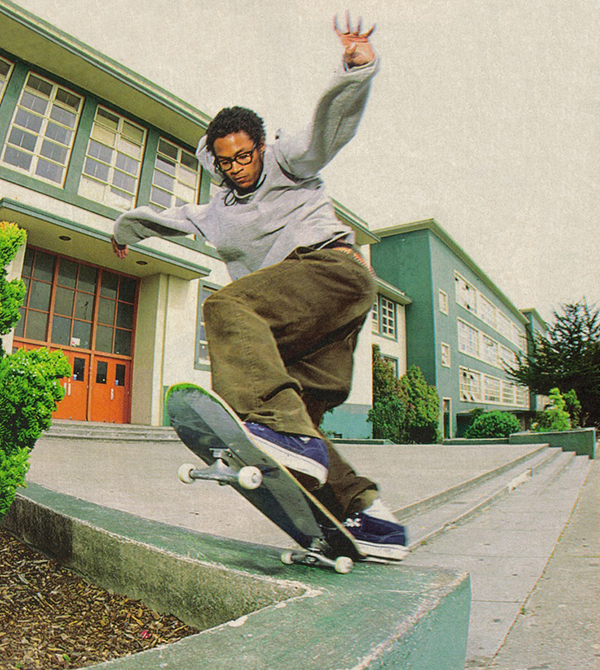 Chris: I have two freelance guys, Ron Ferrera – he does a lot of the ads and print work, he’s really talented. Actually we’ve got three guys, cause we’ve got Ian Johnson doing the Hi Fidelity stuff and then Sean Cassidy who’s in the show, he’s also doing some of the art.
48 Blocks: What other projects do you have going on besides Stereo?
Chris: I’m doing a show called the The Guide on Fuel that airs on The Daily Habit. I’m traveling every two weeks to a different city and visiting a pro skater or pro snowboarder or artist and hanging out in their hometown and doing whatever they do. That’s been pretty crazy, between that and Stereo I barely have enough time for art and skating, but of course I have to maintain.
48 Blocks: I’m sure a lot of people have seen the trailers on Youtube and Eric Noren mentioned a secret project, is there any Stereo show in the works?
Chris: Hopefully, it’s all in the hands of lawyers. You know, dealing with Jason these days – he can’t just sign his name away to anything anymore. We’re trying to figure that out, but we’ve got an offer from another network or two – interest from two different networks about possibly doing something with that pilot. So, we’ll see…
48 Blocks: Do you have to deal with a lot of crazy people coming at you and trying to get down as a result of Jason’s fame? 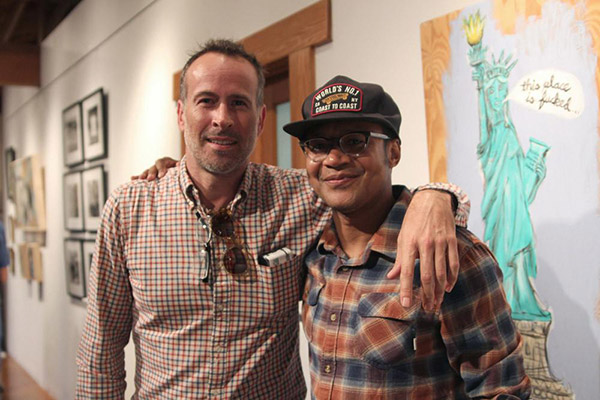 Chris: Ahhhh, here and there; it definitely happens. I get a lot of people thinking that I’m his personal assistant. (laughs) Like, “can you get Jason to sign this” or whatever. That’s every once-in-awhile, for the most part it’s mellow.
48 Blocks: Are you still handling team management duties or have you passed that on to someone else?
Chris: We actually just got a team manager for the first time in Stereo history, so now I’m like “go do your thing.” The riders are out with him, it’s nice not to be stressed on sending people’s packages and stuff.
48 Blocks: So when is A Journey Through Sound going to be released?
Chris: I’d say within a year, we’re saying summer of next year just to be safe. You can tell from the trailer that we’ve got a good start.
48 Blocks: It’s looking really good. Do you have any trips planned for filming or anything like that?
Chris: Yeah, we’re doing some kind of Midwest trip pretty soon, in the next month or two. I think we’re gonna go to London over the summer and do some kind of Northwest thing.

48 Blocks: I noticed that you added a couple new guys to the team.
Chris: Yeah, Zach Wagner who’s an LA cat – he’s been skating with Kevin, the team manager. He’s a sick guy, super styley. We also added John Lupfer, his video came in through Clint and everyone just loved it. It’s been a long time since we sponsored somebody through a video but it actually worked out.
48 Blocks: What’s the official pro roster at Stereo right now, who’s got boards out?
Chris: Let’s see, you got Shimizu, Danny Renaud, Supa, Ollie Todd, and Clint Peterson.
48 Blocks: Hows it been working with Renaud, there’s tons of stories about him being a wild individual.
Chris: It depends on how much he’s had to drink. (laughs) He’s a really cool guy, he gets a little wild now and then. He’s down for Stereo and we’re down to support him, so it’s worked out.
48 Blocks: I just watched this WESC tour video and you were ripping in it, it stoked me out. How much have you been getting out skating lately and logging the video hours?
Chris: Not enough man, I tell ya… I’m lucky if I get to skate twice a week. Two or three times a week is a good week. The best way for me to skate is to get out and that was a five day trip to Miami. When I can leave my computer and my phone and everything; that’s when I can get the most done. 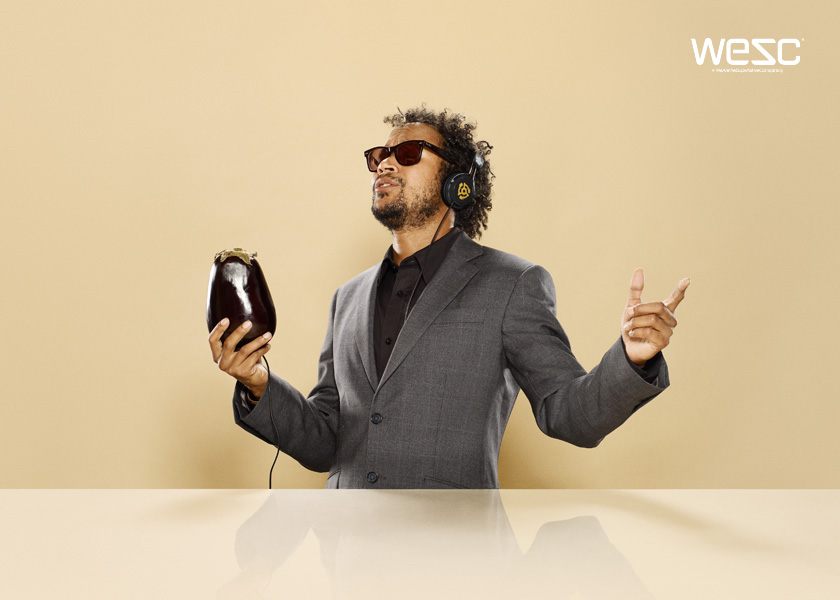 48 Blocks: Who’s pressing Stereo boards now that you’re no longer with Giant?
Chris: We’ve got two different sources, ones is over seas and one is domestic – I’d rather not say who.
48 Blocks: Do you have any other art shows coming up after this?
Chris: I’m doing a show for a Mountain Dew bottle that I did with Paul Rodriguez. It’s this limited edition can in the shape of a bottle and I did the art on it. We’re doing a show for that in LA on May 17th. We’ve got an Etnies party on tuesday with Fishbone performing, I’m pretty stoked on that. I’ll have some art on display there too. I’ve got a show in Vermont over the summer, a solo show – it will actually be my first solo show. It’s at Pursuit Gallery.
48 Blocks: What’s been the hardest thing about keeping Stereo alive for the past 15 years?
Chris: Funding it all, that’s the hardest part. (laughs) Nah, I would say it has it’s ups and downs – skateboarding in general. It’s very difficult to maintain a hard goods business. I’m very proud that we’ve stuck around – we had a hiatus or two in there, with the Giant fiasco and way back with leaving Deluxe. I had to find a new person to make it and that took a year or two with getting the trade marking stuff and all that. It’s been a long road and I’m amazed that this thing has been going as long as it has. It’s definitely a fight, anyone that tells you that they’re making boards and making tons of money and it’s smooth sailing is lying to you. (laughs) 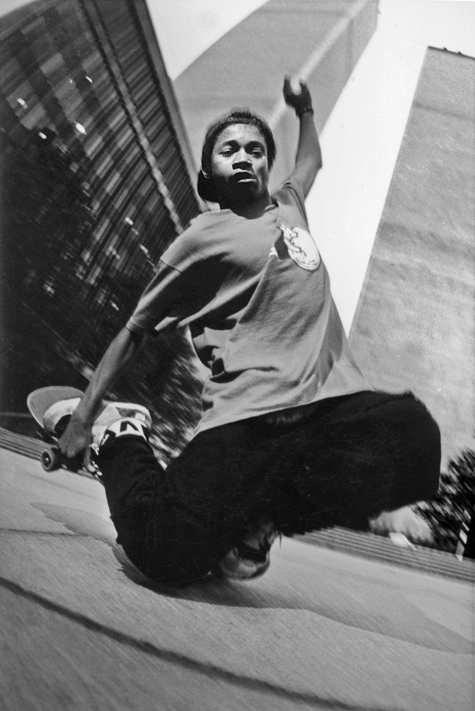 48 Blocks: What’s your proudest moment in doing this for all these years?
Chris: There really isn’t just one. This year, the 15 Year thing and seeing the team back and keeping them together and putting together this promo. Realizing that we kept the whole team and that we’re actually back and selling boards again. This is definitely up there, this is one of them. The first one would probably be the first Stereo video. Every once in awhile you feel like there’s pixie dust leaving your feet and you can do no wrong, you’re in the zone – that was definitely in the zone at that point. Everything we did just seemed to fall into place. That was also due to a lot of other people, like Jeff Klindt who passed away, Deluxe’s support, Ethan Fowler, Carl Shipman, there were so many magic people involved. Then the relaunch of course with Jason coming back, that was a huge landmark moment. No one moment has been better than the other, just like I said about the boards – you don’t have a favorite child, they’re all equal. 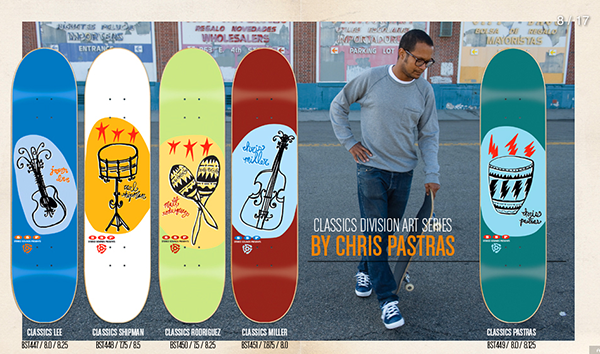 48 Blocks: When it comes to skating, art, and just everything… where are you drawing your inspiration from these days?
Chris: Man, there’s so many – a little bit of everything from everywhere. I don’t have one or two influences, definitely a lot of people that are in this show but there is no one influence on my art. Growing up it was the obvious, Natas, Gonz, Neil Blender… in the mid 90’s I met a lot of amazing people, like Aaron Rose from the Alleged Gallery and Thomas Campbell, Ed was around in that period. That was another influential period for me, I met a lot of artists through Supreme and Alleged. As far as skating, just the team and skating with fun people.
48 Blocks: Is there anything from your perspective that you can pinpoint that sort of defines the Stereo feel? It’s always been a really unique company.
Chris: I don’t want to limit it by saying “this is what it is.” I will say that Stereo is inspired by original street skating in environments like San Francisco, New York City, and Los Angeles – carving through the streets and picking up on whatever environment in front of you as opposed to a controlled environment. It’s more the free spirit of original street skating.
48 Blocks: What words of wisdom would you give to the younger generation?
Chris: If you’re having fun skating a schoolyard with a handrail and a bench, or skating a vert ramp, just do what you do and have fun. If you’re doing what you’re doing for the right reasons then you have no worries.