Brad Johnson is one of those kids from the Midwest that lived the dream in the ’90s. He got sponsored by Clout skateboards and was able to make the jump from St Louis to San Francisco during Embarcadero’s heyday. The fact that he filmed helped solidify his transition into city life. When he wasn’t skating, he was filming the locals for now-classic videos, most notably World Industries’s Trilogy. Eventually, Brad put down the camera to focus on his own skating. The result was him turing pro for Western Edition. From there, he continued to be an integral part of the scene in San Francisco for over a decade. The guy has an interesting story and has seen a lot. He broke it all down for us in the following interview.

48 Blocks: Let’s start out with the early days in St Louis, where you’re from. How’d you get into skating and who’d you skate with back then?
Brad: Shit, back growing up… Splash Skatepark was a melting pot for all of us. I met you, Jabari, Jason, and everybody else that winded up moving out here. We met up at the skatepark when we were kids, then after that it was a take over of the whole city.
48 Blocks: So tell people about what we had going on back in the day when we were kids growing up.
Brad: When were all kids… we all came from different areas of the city. There was probably like two or three skate shops spread out, like North County, South County, and West County – we were all from different ones. We’d go to the contests and demos and stuff at the skate park, that’s how we all met, but then after that a lot of shops closed and there was only one skate shop. We all ended up riding for the same skate shop, then we started taking over downtown… skating Kiener Plaza and stuff. It was pretty much like the Embarcadero of St Louis, a little plaza downtown with brick ground and the same type of ledges. 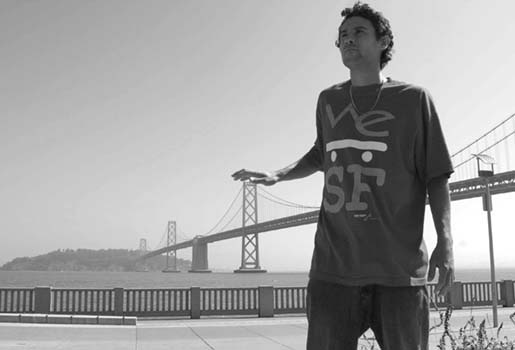 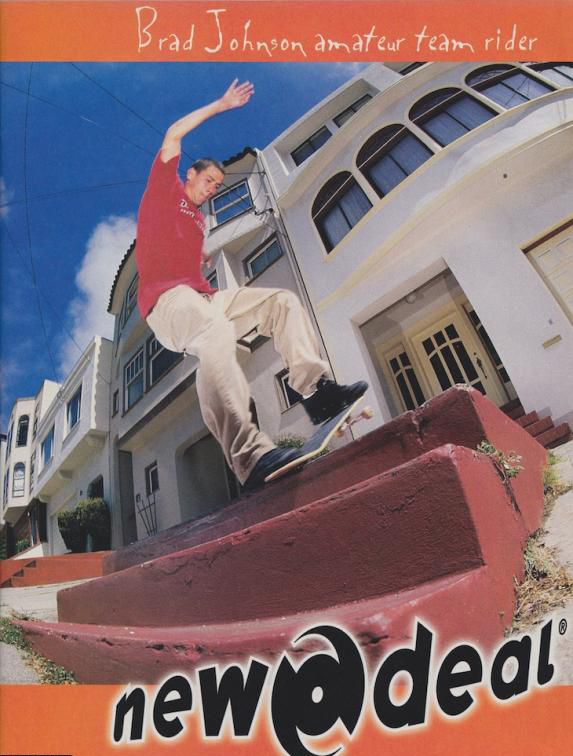 Brad: At the time we were just skating a lot and I had a lot of footage that had never been in anything cause I wasn’t riding for anybody. All the footage that I would accumulate was just sitting there. I wasn’t even trying to do anything serious at the time. Then JB Gillet and Matt Milligan came to town for this old FTC contest at this schoolyard where they had all the ramps and stuff. They were up here and ended up staying at my house for a couple days. JB and Matt saw my tape and asked me if I wanted to ride for New Deal. I was just like, “ok.” They pretty much hooked it up, I just sent in the tape. Then after like a month both of those dudes got the boot cause they weren’t happy with the board shapes and all that. I found out and was like, “what the hell” I wanted to be on a team with JB cause we were bros back then. I thought, “this sucks,” cause he wound up getting on World and I was just on New Deal.
48 Blocks: So how’d you end up going to FIT?
Brad: I was on New Deal, then this dude Dave out here started up FIT and Civilian clothing. They got all the dudes from up here that were the shit – Stevie, Henry, Kelch, Maurice, Pat, all the homies were on. I got on the clothing company. Then we all went to the trade show and a couple people were throwing out the idea, “put Brad on.” Finally they asked me, I didn’t have to even think twice, I was like, “hell yeah!” I just told New Deal and after that it was all good; but things took a turn for the worse again. I had a streak of bad luck. Things were cool for like three or four months, I had boards and was getting paid; I was only working a couple of days a week and getting to skate a lot. All of a sudden, money’s going away from the company for some reason and the shit goes out of business. 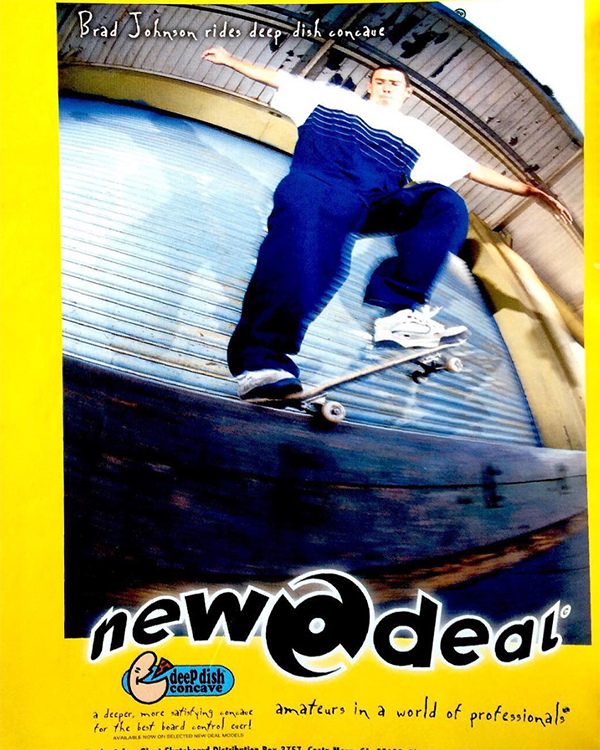 48 Blocks: So what happened next?
Brad: After that it was a long dry spell. When it first went out of business we had the idea to go down there and steal as many boards as we could fit in my car at the time to try to make the next couple months easy as far as having some boards. (laughs)
48 Blocks: Who was on that mission with you?
Brad: I think I can tell this story now, everybody is all good and we gave the boards back and worked it all out. It was me, Sanch, and Stevie. We didn’t have any bad intentions, we just wanted to skate at the time. Everybody was just bummed cause the shit was over. We worked it out, Dave is still cool with all of us and we’re all still friends – so everything is cool.
48 Blocks: How’d you hook up with Rob Welsh? You guys were roommates for a while, he’d always have you in his video parts, at least a trick or two.
Brad: When I first really moved out here, I was skating Black Rock the day that him, Nikhil, Jonah, and this dude Mike all moved out here. They were just skating around and we all met up at Black Rock the very first day that they got in town. Ever since then we’ve been cool. He got on Mad Circle at the time when I was on New Deal and we went on a U.S. tour for a month. It was Karl, Rob, me, Scott Johnston, and Kenny Reed.
48 Blocks: Finally things came together with Western Edition, how’d that come about? 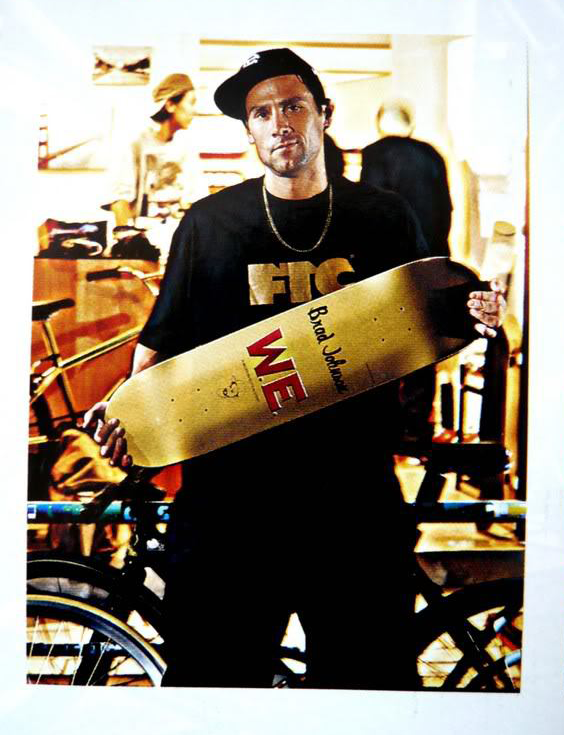 Brad: After FIT went out of business, we didn’t have anything for a long time. Then Me, Jason, and Henry were getting boxes from Sam and Mike down at Girl. They were just flowing us boards, like a couple a month just so we could be skating and stuff. We tried starting a company of our own, but it didn’t really have all the things necessary to make it happen and for some reason it didn’t come together. After that didn’t work out everybody got a little bummed out, I took a hiatus to Hawaii for three or four months. I just sat on the beach and didn’t even really skate. I was just chillin’ out. I came back and got on Stamina, we had a sweet sticker. (laughs) Then they started Western Edition up and asked us to ride for them. It was a good break to step away from skating for a little bit.
48 Blocks: You were one of the first people that I knew that went to Barcelona to skate. This was way before it was really known as a skate mecca. How did you first hear about it and decide to go over there?
Brad: Alex Castendeda used to live in the city years ago. He’s from Madrid originally. He’s just a cool ass dude to skate with, he kind of put it in my mind years ago before everyone really started going out there that the place was pretty tight. At the time I didn’t really think anything of it, then my girlfriend at the time wanted to take a trip super bad, for like months. So, we got rid of our apartment here and packed up and went to Europe. We got an apartment in Barcelona. A couple years later it became blown out, but when I first went there it was pretty much untouched except by all the Spanish dudes.
48 Blocks: You got the cover of a Spanish skateboard magazine back then right?
Brad: Yeah, this dude hooked me up with that, it was called Uno.
48 Blocks: So what are some good memories of traveling with Western Edition?
Brad: All of the trips were pretty tight, we went to London and France – that shit was cool. I think Spain is the best though. I’d just go out there solo if I had to buy my own ticket. Just chill and skate, it’s easy to get shit done out there too. It’s getting blown out there now though, next trip I’m gonna try to go somewhere new. 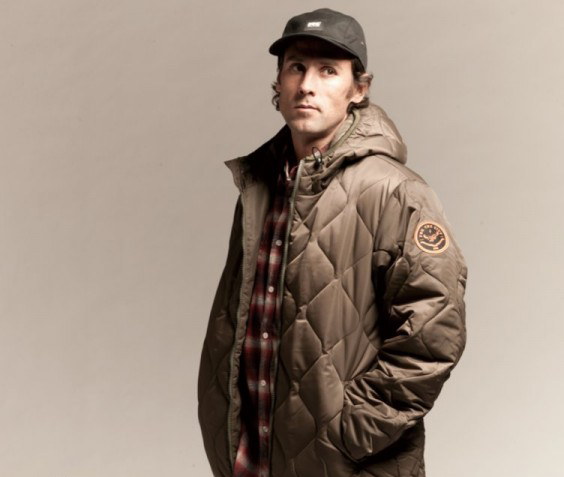 48 Blocks: I think a lot of people have seen the Greatest Misses video. Are you sitting on anymore old SF footage from the 90’s and what ever happened to the Pier 7 video that premiered but never got released anywhere?
Brad: Yeah, I’ve still got tons of footage from the 90’s – a lot of stuff of like Lavar, he was just nonstop. When he fell it was probably because he was just tired of trying something. The Pier 7 thing, I don’t know… it’s gonna happen someday.
48 Blocks: What do we gotta do to make this happen?
Brad: It takes a little bit of dough.
48 Blocks: Any possibility of you making a promo for that and throwing it up on 48 Blocks?
Brad: Oh for sure! Look for that in the near future, I’ll get on that.
48 Blocks: Aight, sparkin’ the ideas! Let’s talk about right now, you’ve got the Western Edition video set to drop – I think the date just got pushed back to next trade show. Obviously you’re filming, I’ve seen some of your new shit and it’s sick. What can people expect from this next Brad Johnson part?
Brad: It’s gonna be a shocker, there’s not one move from Pier 7 in there this time. (laughs) Nah, that place is tight. It sucks that it’s gone cause it was a dope place to skate, but at the same time it’s like a blessing in disguise cause you’re forced to go out and find new shit. We just drive around Oakland, San Jose, Sac, Berkley, we still got tons of stuff in San Francisco that people don’t even fuck with. This part has all types of different terrain in it, hopefully people will be feeling it.
48 Blocks: So with the Pier video and the Western Video, you’ve got a lot of stuff going on. Anything else new that’s coming up?
Brad: I need to take a trip pretty soon. It’s almost time for a vacation, a skate vacation; not away from skating but go somewhere that’s tight to skate. 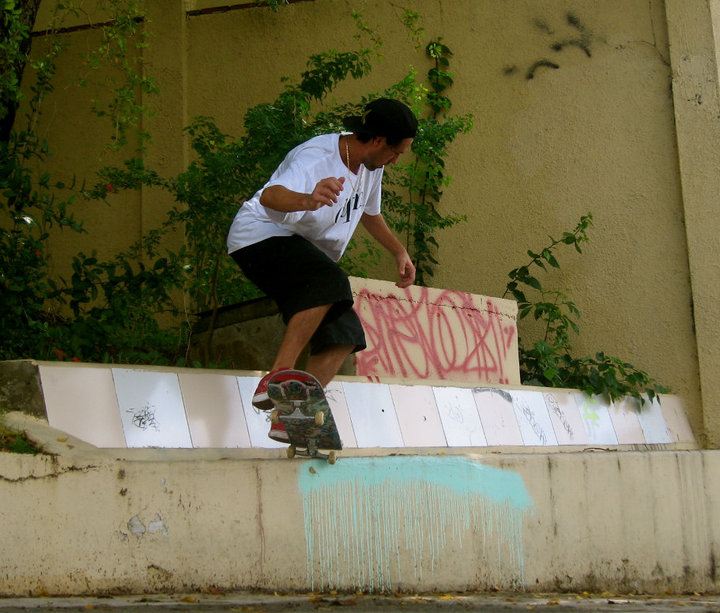 48 Blocks: Where to?
Brad: I might go out to New York pretty soon. John’s out there and Pepper, so I might go out there and crash on their couch for a couple weeks and try to film some shit out in New York. Spice it up a little bit with some East Coast flavor.
48 Blocks: You’ve paid your dues and it’s come together for you, what advice would you give to someone that might find themself in the situation that you were in after the FIT days?
Brad: Think about what you’re gonna do before you get into it, that’s for sure. Don’t burn bridges, you gotta keep everything cool. Stay on good terms with everybody as much as possible, there’s people out there that are gonna hate but whatever. You can’t let that shake you, just do your own thing.
48 Blocks: Any last words, shout outs, or thing you wanna say to wrap this up?
Brad: Yeah, buy Western Edition products. (laughs) We’re starving down here, nah – we’re eatin good, not putting on too much weight; staying a healthy medium. Shout out to everyone in San Francisco, all the homies everywhere worldwide, Jason Wussler, he’s puttin it down. Shout out to Jabari Pendleton and 48 Blocks.