Bobby Worrest has been killing it this year. His amazing video parts in both Krooked Kronicles and Get Familiar have everybody asking, “when is this guy gonna go pro?” Keir Johnson caught up with Worrest out in D.C. to get his take on it all. Sounds like Bobby is just getting warmed up and we’re about to see a lot more from him in the near future.

Keir: Most people first heard of you through PAL, talk to me about Pack A Lunch.
Bobby: Yeah, that was the first big video I ever had a part in. Basically, I knew of the guy who made it, Johnny Edwards, and that he’d made this other video 4 Letter Words. It first started when I was taking the train downtown everyday into DC, just skating and filming with this guy Jacob Campbell.
Keir: The same Jacob that helped Chris Hall edit Get Fam right?
Bobby: Yeah, I also met up with this other guy Zach Laplante, who was working on Pack A Lunch with Johnny too. I think I filmed my first couple tricks for the vid with Zach, and then I met John and he was so down to try to film shit all day and all night. Hooking up with them put me in the right mind set to start filming all the time and getting shit done. Those days were a blast, filming all night and not being sore and being able to skate the next day, wow things are different now.
Keir: PAL really put you and Jack Curtin on the map, also Adam Graham and Alex Hansen had their respective ill parts too. Are your influences any different now?
Bobby: Honestly the only thing that influences me in skateboarding these days is watching old videos, that is it. Seeing those dudes, the ones who were doing shit when no one else was, that gets me stoked!

Keir: Any video parts in particular that you watch a lot?
Bobby: PJ’s part in Wonderful, Horrible Life, I’m definitely stoked on the skating and ledge tricks and everything – he skates rails too, crazy. Mike Carroll in Questionable, stoked! Koston’s part in 101’s Falling Down and any Alex Olson web clips, haha, he rips!
Keir: Who was your very first sponsor?
Bobby: DC Shoes flow. This guy Todd Millspaugh hooked that up. I was living in Houston, Texas at the time. I was like twelve years old. I got two pairs of shoes a month, it was amazing. I was so hyped but then I quit skateboarding to BMX. See, no one in my old Texas neighborhood skated so I skated alone a lot, but that Texas heat made it so I could only really skate in front of my house. So I ended up starting to ride BMX for tricks and so I could travel around.
Keir: Did you have favorite skaters back then, and what about now?
Bobby: AVE, Pappalardo, Dill, Van Wastell, and Mark G all get me psyched.
Keir: Zach Lyons said you have the title for SKATE in DC whats up with that?
Bobby: Shit, I can do every damn trick in the entire book, first try every try, I have never messed up in my entire life…
Keir: Yeahhhhhh… anyway, what about PJ SKATE? 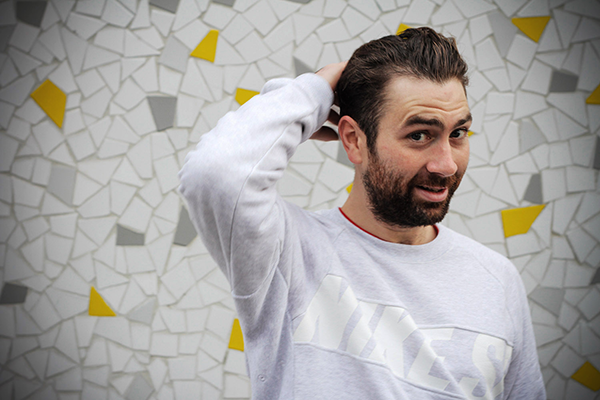 Bobby: Yeah the game I play with PJ is fun. It’s like SKATE, except you do the same trick over and over and over again until the first person messes up and thats how you would get a letter. It’s basically the longest drawn out game of SKATE, it’s fun though, some super training, I like it.
Keir: SF, into it?
Bobby: I love SF, it’s crazy. There is no like official “main spot” in Frisco these days, of course there is The Island and the new spot, but I like the BART bench spot the most, homies know, homies know…
Keir: What was your first experience like out there?
Bobby: I remember me and Nick Dompierre staying at Mic-E’s house for the summer one time. He was mad because we didn’t do the dishes, but I didn’t see why we should do the dishes because he was never ever there, like never haha. It was like he was like our dad or something. I remember we would skate through the Mission all the way to the Pier at like 2:00 AM. 24th Street is kinda trife.
Keir: You almost skated to Ultramagnetic MC’s Poppa Large in the Krooked Video, and you’ve skated to him in other vids. How did you get into Kool Keith?
Bobby: Hmmm, I have no clue who got me into Kool Keith, oh yeah it was Alaska Scott. He gave me all of his old CDs and one of them was the Dr. Doom album, it was amazing. Back in the day I used to listen to that Blue Flowers track too. Dr. Doom has gotta be my favorite alias of his. I went to a Guru show and Kool Keith opened for him at the 9:30 Club in DC, it was so sick. I skated to Kool Keith in this video Mark Nickles made called Summer of the Cicada.
Keir: Yeah, the successor to Where I’m From, a lot of your part in Cicada were spots in your hood in Maryland, what part of town is that?
Bobby: Montgomery County! It’s this county in Maryland. The skate scene is cool, I see new young kids coming up all the time out there. We need a good skate park somewhere out there though. I’ve definitely explored the area a lot, there is a grip of shit. Seems to be a lot of double sets and things like that. There was this amazing hubba but then the apartment complex built a garage obstructing the roll up…
Keir: Your ender in Get Fam was at a famous Silver Spring double set out in Moco, what’s up with that spot?

Bobby: Yeah, I remember checking that set out for the first time awhile back because I’d heard people were doing tricks down the steps. I’d also heard Chris Senn had done gap out to 50 50 on the smaller rail side too in an old sequence in SLAP. Basically I just drove past it one day years later to see what was up with it, that’s when I realized no one had ever gapped out to the bigger rail.
Keir: How did that whole night work out for getting the back lip? 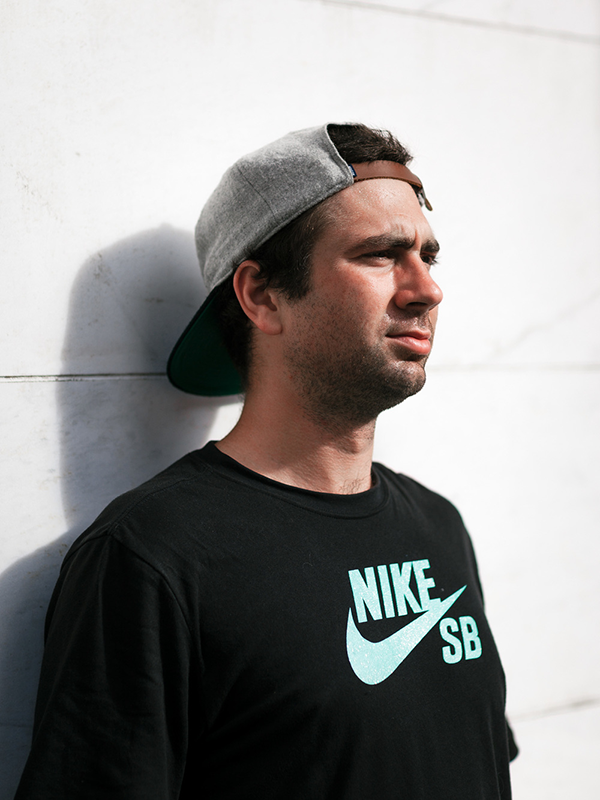 Bobby: The roll up is this fucked up brick, luckily they were doing construction there, so there was a bunch of plywood laying around. The roll up started directly in front of the guard desk of the building, so I have no idea how we got away with it. Man, honestly speed was the biggest problem because there was a gnarly metal fence right at the bottom. If you went too fast you’d fly right into it. You can see in the footage when you guys tackle me. Fortunately that night the fence only destroyed my board and not my body. I don’t know how we got away with it, but I’m really stoked it all worked out in the end.
Keir: Besides dropping a part in Get Familiar, a lot of people don’t know you actually filmed some things in the video too. What was one thing you were psyched on that you filmed of somebody in the vid?
Bobby: Casey Rigney’s first line with the 5-0 on the ledge and then the switch ollie over the bar, that was cool. I also filmed a bunch of tricks of Adam Graham and Paul McElroy which were in an old Logic video. I filmed Paul’s ender in Where I’m From too, the crooked grind on the big square rail and this crazy ollie off a ledge over some concrete light too. Filming is fun for like ten minutes, but then my back decides to give out.
Keir: Are you going to go back to the LOVE fountain? 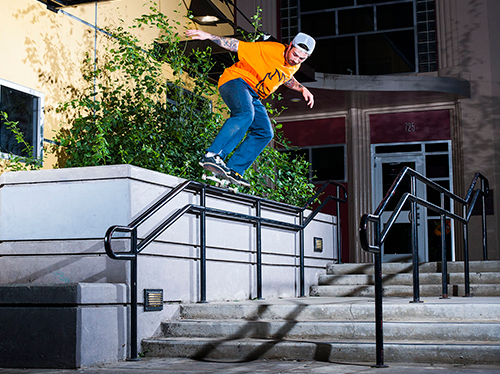 Bobby: Well I ollied it first try this past time. I went there a couple years back and fucked my axles up trying to skate it. I’m definitely going back I got a trick in mind too…
Keir: What’s on the table right now for vids?
Bobby: Es video, I’m filming for that now, it’s fun. About to start filming for the new Krooked video too. Mark’s got some awesome ideas, so if I’m skating in spandex don’t go trippin!
Keir: Horse jockey outfits? When is Krooked going to turn you pro by the way?
Bobby: Right now, I feel like I started skating yesterday…