Skateboarding, and popular culture in general, owes Andy Howell a lot. He was a pioneer of technical street skating from the late ‘80s through the ‘90s. He had a hand in creating some legendary brands, including New Deal and Element. And he was the first person to package hip hop, graffiti, and street culture with skateboarding into a movement that would eventually grow into one of the biggest sections of our industry. I would go so far as to say that without Andy, what ultimately became streetwear might not exist. Howell has been working in technology for the last ten years, but he’s still paying attention and up for a collaboration every now and then. His latest, a project with North Carolina’s Black Sheep skate shop, is something special. We recently hopped on the phone with him to find out more.

How did this collaboration with Black Sheep come together?

I’m originally an East Coaster from Virginia and the Outer Banks of North Carolina. So I knew those guys and had been following what they have been doing. They reached out to me and said, “Hey, you wanna do a collaboration?” Generally, I haven’t been quick to do collabs. I’ve turned down a few of them because normally I don’t like to regurgitate old artwork, or old things that I’ve done. I always try to move on to new things, and keep innovating and mixing it up. So I told them, “If we do something, it has to be innovative, different, and something that hasn’t been seen or done before. The idea of collaborating on a board came up. Then it turned into a capsule collection. Just doing a board was like what everybody’s done. I wanted to figure out a way to add a technology element to it. We started talking about augmented reality, and some of the things that are trending in technology. The idea came up to create a little bit of a treasure hunt within the graphic of the board.

The board, itself is not a normal board graphic. It started out as a two-and-a-half by six-foot painting that I did. There was so much detail in it that I thought maybe there was some way to use augmented reality to scan through the painting and find different things. And, as you find different things, it pops out videos, hip hop songs that I’ve done, things like that. We had a lot of fun putting it together. And the other collaborations that those guys have done in the past looked really good. So I was excited to do it. 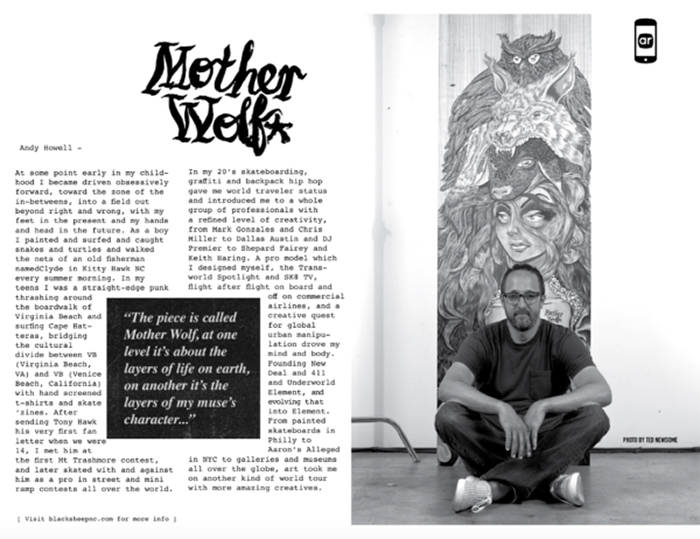 What was the process for creating the augmented reality portion of the project?

We had the idea of creating a zine type of a vibe. I used to make a lot of photocopied skate zines back in the day. We had to figure out what platform to use that could combine augmented reality with the idea of a zine. The Layar platform was one that was a good match. So we dug into it, and figured out how to put it together.

The art and videos from this collab that are online are paying homage to your career. Is that the overall theme throughout this entire project?

I think the theme is being multidimensional. The thing that made me stand out as a skateboarder, besides riding my skateboard, is that I’m an artist. And I’ve been involved with lots of different things, like starting skate companies and things like that. So the idea of the experience being really multidimensional was important. That’s what the augmented reality side of the project is. You start to come across the different layers of me, my history, and my career. It’s all pieces of me. 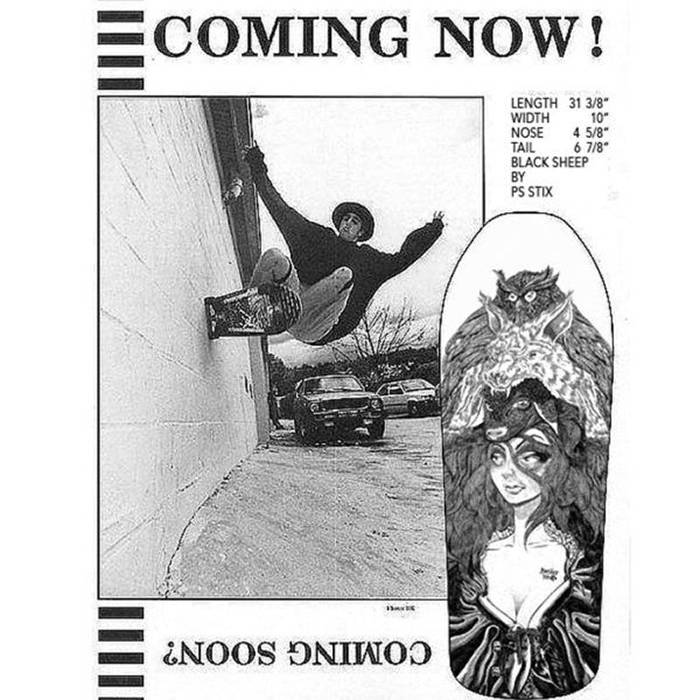 How much would you say your roots in skateboarding influence what you do today?

It influences everything. I look at everything I do. I’ve been in half a dozen industries since skateboarding. I’ve been in technology for over ten years now. Every experience relates back to skateboarding. It will even relate back to certain tricks, or things that I’ve done or thought of in the past. A skateboarder has this interesting lens that we look at the world through. I can look at any object, any obstacle, and any challenge that’s in front of me and see it from a number of different angles. Then, apply myself to it in a way that’s going to change the way people think about that object. For me, that was the most inspirational thing about skateboarding—being able to go out and create anything that I wanted with no rules or boundaries. I’ve seen that in the early days of hip hop and being involved with some of that. And being involved with the early days of skateboarding, or, at least, this generation of skateboarding. And, also with technology, each time it’s that kind of Wild West mentality. You can kind of step into it and anything is possible.

_How much do you pay attention to skateboarding and the culture surrounding it these days? _

I’m still connected with a lot of the folks that I was involved with in skateboarding in the ‘90s and early ‘00s. Many of them are leaders in the industry. So I live vicariously through them, and what they are working on. From people that are on the Olympic Committee for skateboarding to folks at The Berrics, and places like that, I keep tabs on it. And being able to do a collaboration now and again gives me an opportunity to stay involved. 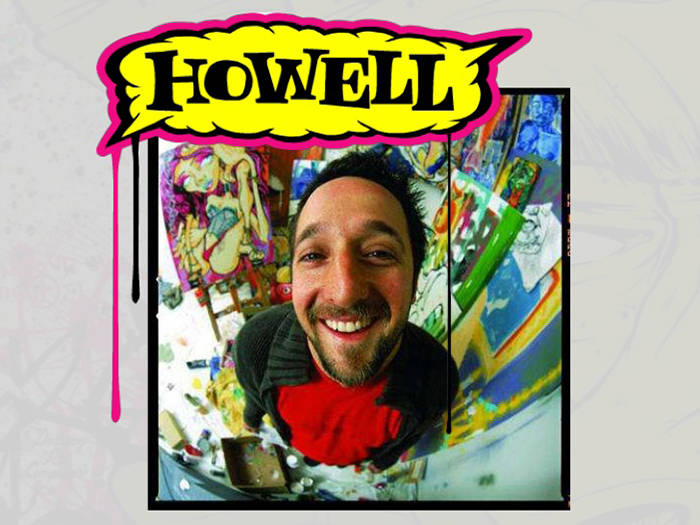 Underworld Element, which is a company that you birthed, was sort of the original marriage between hip hop, graffiti, street culture, and skateboarding. That movement has exploded into its own section of the culture. What’s your take on what that’s grown into?

For me, it all started when I was around thirteen or fourteen years old making art. I was obsessed with art as a kid; I started out drawing skulls and skeletons skating in pools. It evolved into graffiti art over time. Then, eventually, it became more contemporary art, [like what] they do in galleries and museums. Interestingly enough, in high school, I had a buddy that was a drummer that I skated with. And I had another buddy that was a hip hop artist. He was the first hip hop artist that I had ever heard in person. He would bust it out in art class. My buddy that played drums would make beats by beating his thumbs on the desk, we would make bass sounds, and he would bust freestyles. I thought, “This is the most amazing thing!”

This was in the time that skateboarding was just exploding in Virginia Beach with Mount Trashmore. Young upstarts like Pharrell were just coming up as skate kids in our town. I ended up going to art school in Atlanta and fell in with Dallas Austin, and guys that were doing R&B and hip hop. That was during the birth of the hip hop music that started coming out of there. I ended up starting a rap group with Lil Jon with me rapping and writing, and Lil Jon djing. I really fell in love with the combination of hip hop, graffiti, and skateboarding. 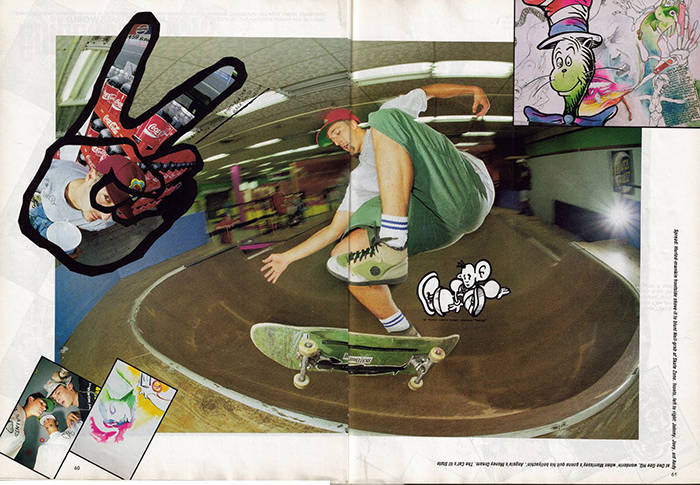 After we started New Deal, I started playing around with this idea in my head. The idea of New Deal was created for skaters by skaters. I had the idea of merging hip hop, skating, and graffiti together, and using the boards as the canvases. Underworld Element started to brew in my head. A lot of the music that I was listening to at the time had that vibe. I was watching Ralph Bakshi movies and stuff like that. I was very much into combining all of these things together. The synthesis of it was when I started doing graffiti with Jose Gomez, Dave Kinsey, and a bunch of those guys. We were running around Atlanta bombing walls. We would do these big pieces, go take photos of them the next day, then go back to my house and turn those paintings into graphics for skateboards. At the time, we were using fax machines and FedEx to send graphics back and fourth. It was very early days. It was really empowering to put something on a wall, then take it home and turn it into something else that would eventually end up on skateboards, t-shirts, and stickers. That DIY vibe drove me and a lot of the people that were doing similar things.

My vision for Underworld Element was creating something that would combine all of the cities in the world. It would be the best skaters in urban areas around the world, which was innovative for the time because it didn’t really exist at that point. Skateboarding was so secular and small. We were traveling around the world and meeting people. But it was really only a few pro skaters that were getting to travel and meet people in Tokyo, London, Paris, and places like that. So my idea was a skate company that brought together all of the cities of the world with a pro rider and am rider from these different cities.

Hip hop was heavily a part of it because I was in Atlanta at the time. And I was with a lot of the guys that were creating the Dirty South movement. And there were a lot of guys that were coming down from New York to record at my friend’s studio. Everything was a combination of hip hop, graffiti, and street skating for me at the time. I was just into those things a little bit on the early side. I was also inspired by a lot of the guys in New York who were in a very tight-knit community. I really enjoyed spending time with those guys during the early SHUT days.

It’s cool to see that it’s exploded to all of these different elements like streetwear, and all of those different things. I think when I launched Zero Sophisto in ’92, there wasn’t a lot going on in skateboarding related to streetwear. I think, in fact, Zero Sophisto was the first streetwear-only skateboard company. I remember getting Jamie Thomas, Pepe Martinez, Josh Kalis, and a bunch of the different guys on the team. I remember some of them asking if they could even skate for my company because they already had a board sponsor. I had to explain that it wasn’t a board company, it was a clothing company. Again, it was sort of that Wild West mentality. 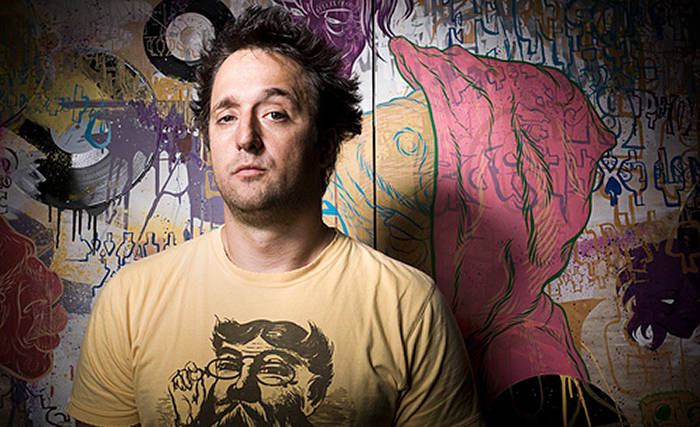 Are we going to be seeing more projects from you within skateboarding in the future?

I would love to do something that’s really focussed in skateboarding again. I think having the adventures that I’ve had outside of the industry, from an apparel, retail, and technology standpoint, there’s a lot that I could bring back into skateboarding now to continue to help push things forward. I think that there’s a lot of opportunity in the industry. It has evolved in a lot of ways that I didn’t expect it to over time. There’s a lot of opportunity to do something that’s really creative.

Definitely. Is there anything else that you want to mention that wasn’t covered?

Just shout out to all of the folks that were involved in the project—the guys at Black Sheep, Josh and Ritchie. Also, Paul Schmitt; it’s always a pleasure to work with him. He’s a great old friend and business partner of mine from New Deal, Element, and the other companies that we did together. And shout out to DJ Special Guest who mixed our little new wave mixtape, which was pretty cool. It was all super fun!

Originally Published on The Berrics