If you’ve ever been to San Francisco, then you should know who Ando is. This guy has been holding down FTC off and on for over a decade. We recently sat down with him and got the low-down on the old days, skateboarding, photography, and more. Anyone who’s worked at a skate shop for that long has stories. When it’s the shop that has arguably the richest history in skateboarding, those stories are exceptional.  Keep reading for an account of FTC’s legacy from a guy who’s been watching it unfold since the ’90s.

48 Blocks: How did you first get involved with FTC in the very beginning when you first started?

Ando: I was like twelve or thirteen or some shit and I went to summer school at Sacred Heart which was by the first location of FTC on Bush Street. I went there everyday after school and just lurked out. Just checked out all the shit and got super deep into skating and realized that that shit was off-the-hook. One day Mike Thunder, who’s an ex employee of FTC, asked me if I wanted to do a job. I said yeah. He told me he would give me any video I wanted which was VHS at the time. I asked him what I had to do and he took me downstairs and showed me this rat that had eaten poisen, it’s body was all decayed and covered in maggots laying on some pants and shit. He asked me to clean it up and I cleaned it up. They gave me a Color video and some Eric Koston Bhudda stickers with the slurpee and it was a rap. After that I was pretty much in there every day doing little shit and lurking.
48 Blocks: What made you decide to start taking photos.
Ando: Fuck, I don’t know. Back early on, like 90’s craze…I was shooting some photos for a minute and kinda got into it and then kinda fell out of it. I didn’t really give a shit, when I lived in New York I didn’t really care. Then when I came back, I went to Movida ( a bar that was owned by Kent from FTC) which was a Sake fest. I had to capture it so I went to Walgreens up the street on Fillmore and bought a Poloroid and the rest is history.
48 Blocks: So, what’s your favorite medium for photography?
Ando: To be totally honest with you, I haven’t been shooting for long enough to know. I’m still experimenting. Right now, Poloroid is my favorite to shoot with and I like the results the most because I feel like I can manipulate it the best; but I always have a digital on my hip and i’m trying to keep this crackin…bobbydigi.

48 Blocks: Give me one funny story from the old FTC.
Ando: Ummmmnnnn, okay I got a good one. When I kicked Tyrone Olson out of FTC. One time Tyrone Olson came through FTC and he was just acting like a fuckin dick and he caught me on a bad day. He asked me for griptape and I was over it. He set his board up and was leaving and didn’t say shit to me. So I was like, “A motherfucker, where you goin?” He was like, “What?” Then I was like, “What’s up with that griptape?” He’s like, “Oh, it’s not free?” And I’m like, “Fuck no it’s not free, you better give me $5.37 mothafucker, $4.95 plus tax.” So I made him pay for the grip and told him to get the fuck out of there and take his whole crew with him too.
48 Blocks: Daaaammmn.
Ando: But that’s a weak one, that’s a weak story. There’s a lot better ones but I can’t even go into it cause I don’t wanna hurt anyone’s feelings or throw haters on anybody.
48 Blocks: And we don’t wanna publish things like that.
Ando: There’s a lot of good ones. All I can say is that any name that you can think of from 90’s skateboarding, there’s a story about them at FTC…good, bad, or sad.

48 Blocks:What was your first set-up both skateboard and camera.

Ando: The first board that I ever rode on was the Tommmy Guerrero Powell board with the flames. My cousin had it in like 85 or 86 or whatever. He taught me to ride around a little bit. I was young, I was like six then. The first board that I ever bought was kind of inspired by that, it was a Tommy Guerrero Real board… the very first Real board. That was the first board that I went to the shop and picked out and knew what I was getting. Some Indys, I had purple Indys on there. It was the TG with the SF logo and purple Indys. I had some Spitfires on there and some NMBs. Cause that’s what’s up, I had bridgebolts on there too.

48 Blocks:What about camera?Ando: First Camera, fuck I don’t know…like some My Fischer Price jump off. No, the first camera in my new incarnation was a Poloroid 600 from Walgreens, the silver one the One Step.

48 Blocks: Tight, I have one of those I think. Do you have any special approach for taking photos?

Ando: Just shoot as many as you can and make sure that you make people feel uncomfortable enough when you shoot that you get some cool shit. Like tell someone you’re gonna shoot then wait three seconds and you get a better photo. Not really uncomforable though, I don’t wanna sound like a weirdo…

Ando: Nah, I ain’t on no Terry Richardson hype.

48 Blocks: What exactly is I Remember?

Ando:I Remember is basically the shit. (laughs) It’s top secret. You’ll know about it when it comes out, it’s a wrap.

48 Blocks:If you could pick a dream team in skateboarding, who would be on it?Ando: Like of all time or current right now?

Ian Johnson: Shamile on am, like permanant am forever.

Ando: Shamile was in my head cause I just watched Paco, I’ll throw Shamile in the mix…he’s dope. Two more just to round it out, I’ll say PJ….that guy kills it and Dwayne from Western Edition.

48 Blocks: What’s the most points you’ve ever scored in Tony Hawk?

Ando: (Laughs) You know, I don’t really play for points, I play more for style. I keep it real.

Ando: You know what, name a number, I’ll hit it.

48 Blocks: Infinity times two. If you could move anywhere in the world, where would it be and why?

Ando: Tokyo because it’s rad there, you can drink all day long. Not like I’m an alchoholic or nothing, but it’s just a fun vibe. It’s chillin, good photo spot, nice people, politeness, you feel safe on the street, good food, subways, skate spots, cool shops.

48 Blocks: So what ever happened to that left-over stack of decks from when they were filming Goldfish? 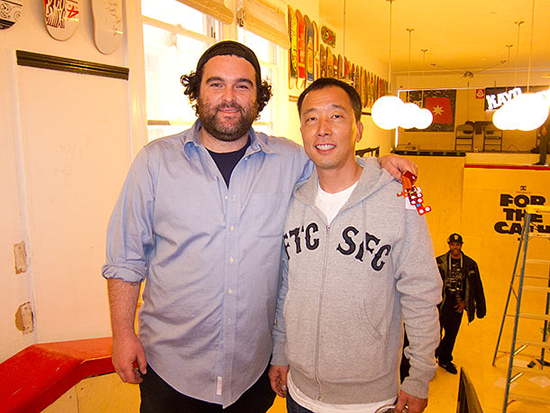 Ando: Wow, man you did some research huh? Well with the left-over stack of decks, basically me and Ian Johnson from Western Edition used to go into FTC everyday during the time that they were filming that video. Meza and Carroll or somebody would usually be in there and we would just get all the used boards that they would leave and take them. At one point we had like thirty boards just stacked.

All types of shit. At one point I was taking those boards and sanding them down, spray painting them over, and taking them to Embarcadero and selling them for like fifteen to twenyfive bucks and hustlin or trading them for like wheels or whatever I needed. That was the ultimate hustle, you could buy a board for fifteen bucks, skate it for five days, sand it down and spray paint it, and sell it for fifteen bucks at Embarcadero to some kid.

48 Blocks: Tight. So, we’re gonna wrap this up, I think we got enough. Any closing comments or anything else you want to say?

Ando: Thanks to 48 Blocks for holding it down on the first Ando interview ever. Shouts out to Ian Johnson from Western Edition, number one stunna in the game right there…watch out for that guys shit. Shouts out to my hommie Dylan, we gotta keep making the music and keep this crackin, Shouts out to B. Fox, I Remember for life, let’s get this crackin son, Shouts out to all the skaters on the come-up, holla at your boy.