Adrian Williams makes magic happen on his skateboard. Some of his combos are absolutely mind-blowing. In a city like San Francisco,  there’s always new kids coming through. Some stay and leave as quickly as they came. Some stick it out, get coverage, get sponsored, then turn pro. Adrian did the latter. We got the full story on what it took to realize the dream

48 Blocks: You’re originally from Alaska. How did you get into skating and what’s skating like in Alaska?
Adrian: My big brother was a skateboarder, so I was trying to do the big brother thing and be cool like him. Then it was just tight so, I kept skating. With Alaska, summer is when you’re skating. In the winter you have to skate in parking garages cause it’s super cold, but summer time is great for skating. It’s almost 24/7, you skate ’til midnight. You think it’s like nine or ten, but it’s like twelve or one.
48 Blocks: When did you first come to San Francisco and how did that happen? 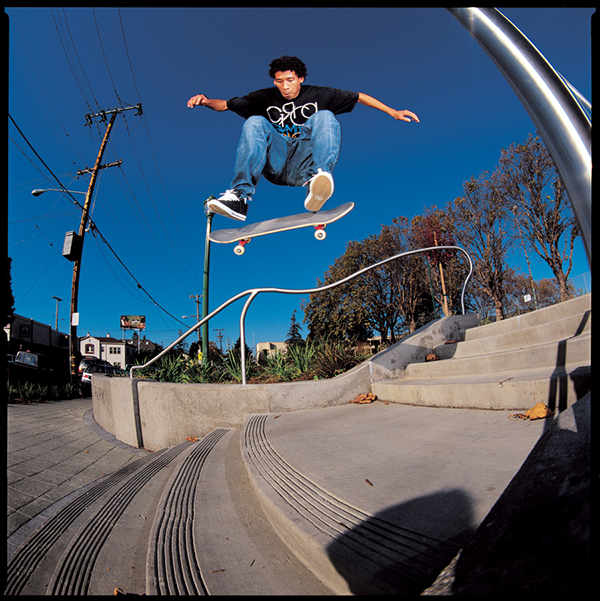 Adrian: I think it was 2001, no 2002. I came over here, I was about to go to school in Alaska. I had a scholarship for four years. I actually went to school for a semester and I did real bad. I made an appeal to get my scholarship back and I went again for like another month, but then I was like, “dude I’m over it, I’m out.” I got a job and worked for like two months. I saved up about 1,000 bucks and came over here. I had some friends over here too, so it wasn’t like I came all crazy, like “do or die!” I had some backing so I was like “come and do it and try and not regret it later.” So I don’t know, it seems to be going okay. I’m still broke. (laughs)
48 Blocks: Were you sponsored before you came or did that happen after you came to California?
Adrian: I had a homie out here and he showed a video to Rodney Smith at a Skater of the Year party. It was an Alaska video that we were both in. That was like a month before I came out here, but I was already planning to move. Then a month before I came my homie Jerry showed him that video, then Jerry called me and says, “this dude Rodney wants you to call him.” So I called him up and told him that I was coming out here and he was like “alright, cool.” Then he hit me up two weeks later and bought me a ticket.
48 Blocks: Oh shit.
Adrian: Yeah it was raw, I was like “Whaaat! he bought me a ticket, it’s official. I’m out.”
48 Blocks: So how long did you skate for Zoo York and what caused you not to skate for them anymore?
Adrian: I skated for them for like a year or two. Then when they had their merge with Aesthetics something happened. I guess you could call it a conflict of interest. One of the Aesthetics dudes wasn’t really feeling me and he had that seniority. That’s pretty much how it went down… that’s how it happened.
48 Blocks: After that you stayed on your grind filming and then dropped a part in the fourth FTC video, A Fine Line Between Love And Haight.” Talk about how you were feeling after Zoo York and how that video part came together? 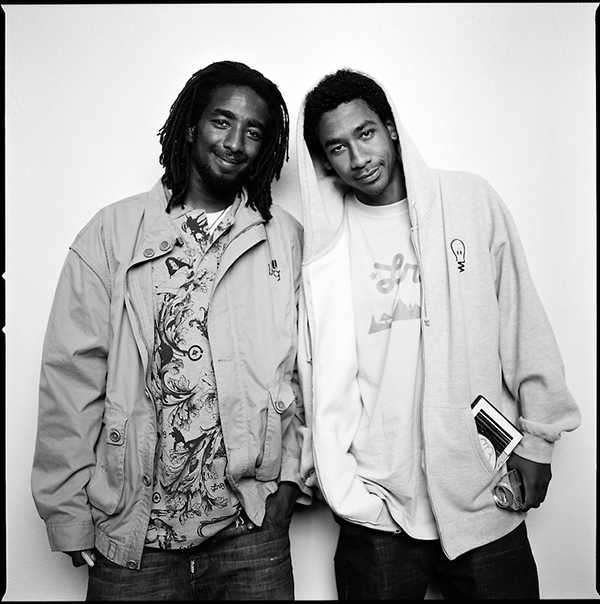 Adrian: I was just skating. Ando was talking about making a video and they already had the slots filled or whatever. I was like, “yo, I’m filming – I’d definitely like to have a part. So if I come through with a sick part, maybe you’ll change your mind or something.” Then eventually I guess someone had pulled their part cause they had to do some other things. The slot opened up and luckily I was on my job to be able to fill in that section. Yeah just skating, skating regardless. I’m gonna skate whether I’m sponsored or in videos and magazines or not. I like to film and stuff just to have it, it worked out that I had footage and Ando plugged me – that’s basically how that happened.
48 Blocks: Now you’re riding for Think, you’ve been riding with them for a minute. How did that first happen, was that before or after the FTC video?
Adrian: It was after or maybe during me filming and talking to Ando about trying to get a part. I was talking to a few people, I was talking to Santa Cruz and I was talking to Think. Ando was hooking me up with FTC boards in between too. That all just kind of happened, I was just trying to figure out my options and those were the closest people to me that I could talk to.
48 Blocks: How has it been riding for Think, how has that program been treating you?
Adrian: It was pretty slow at first, I definitely had to push for the things that I wanted to see. They weren’t really trying to push it for me. It’s cool now, but it was kinda slow in the beginning. They were helping me out a little bit, which was definitely good… but for this city you need a little more to just make it out here – just to eat three times a day and pay your rent and have soap and toothpaste and stuff. It’s definitely cool now though, I think I just had to open my mouth pretty much. That’s really what got things moving, they started taking me more serious. I came to them and let them know what I was trying to see, and if we can see eye to eye then we can work together and if we can’t see eye to eye then we can’t work together. Once I put it to them like that, things started moving a lot better. They’re moving cool right now and hopefully this summer I’ll be having a board.
48 Blocks: Is there an official release date on the pro model or is it just in the works?
Adrian: It’s basically in the works, but this summer is a definite thing – April / May / June, one of those months. I’m just trying to work out cool graphics and things. 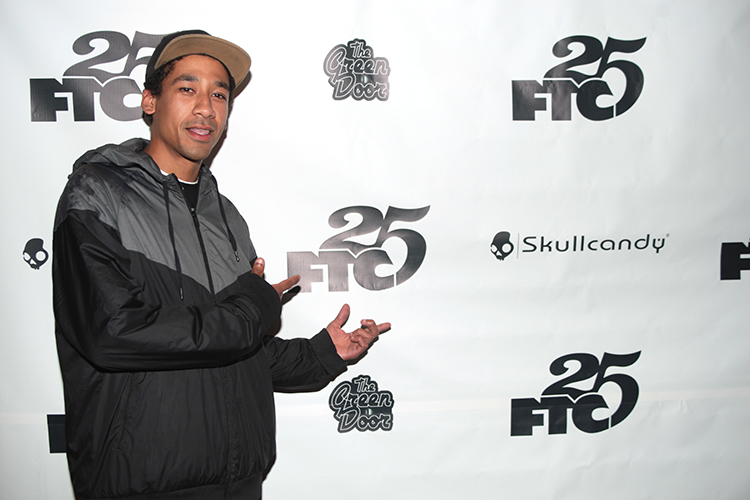 48 Blocks: Is there a Think video coming up?
Adrian: Yeah, we’re definitely putting out something. I’m not exactly sure what it’s gonna be, but it will be tight though. You’ll see your boy in there. (laughs) Yeah this summer, with the board.
48 Blocks: Who else besides Think are you riding for these days?
Adrian: Grind King, they help me out really good. That’s like an official sponsor, then I get flow from LRG which is dope and flow from Circa, FTC, and I think that’s it… oh Lucky Bearings. Think, Grind King, and FTC really hold me down and I appreciate it – when nothing was crackin’ FTC kept me snappin’. (laughs)
48 Blocks: Grind King is an interesting sponsor, was there any conflict with you riding for Grind King since Venture comes out of Street Corner?
Adrian: I got on Grind King before Think, they were pretty much the first ones to really help me out in real ways as far as a little bit of a salary. Then getting on Think, Tony wasn’t trippin’ – he just wanted to make sure that they wouldn’t portray me in a certain way, like make Grind King look whack cause that would make me look whack. He just wanted to make sure that they were doing things cool over there and they were. When they got that new team manager, Kevin Lewis, he switched things up and revamped the whole team starting with me. Now they got a lot of cool dudes on there – Joey Brezinski, Castillo, Mike York, Danny Supa, and some other fools too, I can’t remember right now. People have already had their first opinion of Grind Kings, just like me. Grind King has never been something that you look and thought I want those, but after Kevin came in and switched it up; things are looking pretty cool.
48 Blocks: Who have you been skating with and where have you been skating? 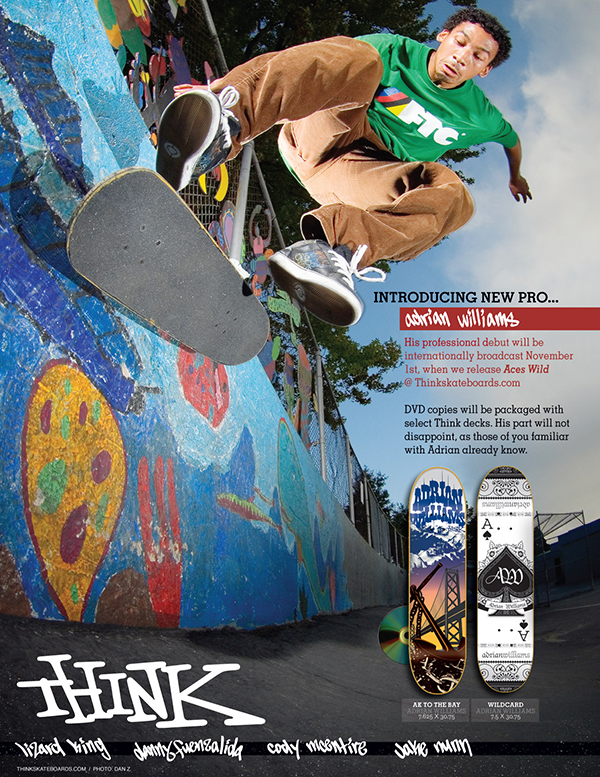 Adrian: I skate with my roommate Felix down at the Island cause that’s the only place that he really likes to skate. I skate with RJ, Richard Jefferson, I skate with him a lot. Those are the main dudes that I skate with on a day-to-day basis when we’re just out having a good time. We skate 3rd, I don’t even know where else to skate anymore. It’s hard to find a place where you can skate and not get kicked out and people are gonna be there, so you have a cool vibe going on. The Island and 3rd, that’s where I find myself at a lot of the time.
48 Blocks: Have you been traveling at all lately, got any trips planned?
Adrian: I haven’t traveled in a long time, I’m trying to get my travel on. Hopefully I’ll be going to like Arizona or Texas or something at the end of this month and Europe sometime this year. That’s the only travel things I know of, maybe LA or something. I’m looking forward to Europe, I’m trying to see that place one time.
48 Blocks: How much interaction do you have with the rest of the Think team, do you ever talk or skate with those dudes?
Adrian: I skate with Danny sometimes when he’s out here. I skated with Cody one time when he was out here. Cody doesn’t make his way out here that much, Danny just moved to Miami, Jake Nunn is doing his thing out in Texas, and Lizard King – I haven’t skated with him since tour. I don’t skate or talk with them that much, but that’s something that we’re working on for the future so we can all just skate and vibe together.
48 Blocks: Get that family vibe going with the team.
Adrian: Yep. Right now we all don’t talk to each other too much, but we’re cool whenever we get together. We mesh together pretty well, we may look like we’re all from different places, but we’re all cool people. 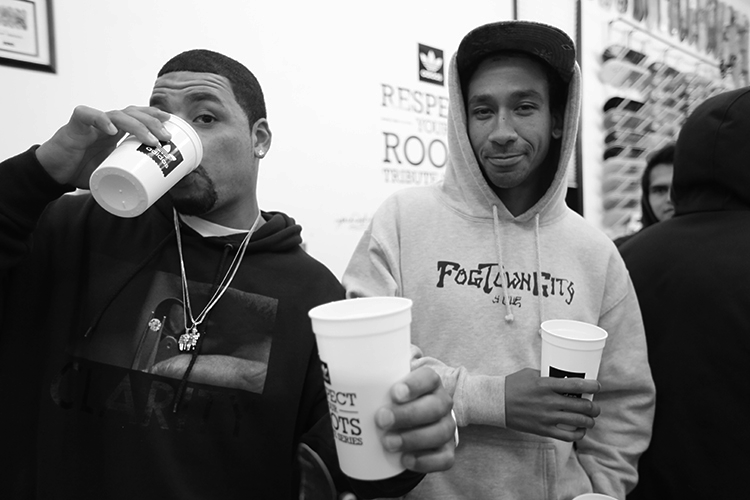 48 Blocks: What’s up with the skating itself, what are you into right now trickwise?
Adrian: The tricks… I don’t know. I’m trying to do those wild tricks, the tricks that I haven’t seen before or thought about. That’s pretty much what I’m thinking on the tricks – that’s what inspires me, something fresh. Whether it’s just a new spot with a cool trick on there or an old spot with a new trick, cause that’s what we got out here… a lot of old spots. (laughs) I’m just pretty much trying to come with some new shit, some things that I’ve never seen before.
48 Blocks: Any last words or shout outs that you want to say to wrap this up?
Adrian: Thanks to 48 Blocks for hooking this up, I’m on the 30th block on the N-Judah line.
48 Blocks: We all city baby!
Adrian: (Laughs) I wanna thank Doug for letting me sit in the presidential chair and Ando for always just keeping me skating, whenever I really did need something he always plugged me. FTC, for keeping everybody skating really. Thanks to all my sponsors and my parents for supporting me when I was coming up. All my homies, all my friends… pretty much everybody, thanks!