Aaron Herrington has a good trick selection, and an eye for spots. Add those to solid skills on the board, and you’ve got yourself one exciting skater to watch. You may not have heard about him just yet, but we’re predicting big things from Aaron in the future. We recently sat down with Aaron to get his background story. Get familiar below. The guy is clearly going to be around for years to come.

48 Blocks: How old are you, and where are you from originally?

48 Blocks: What made you decide to come to San Francisco?

Aaron:  I was either going to move to LA or here. I don’t have a car. So I figured SF was the best possible move.

48 Blocks: Talk a little bit about the scene Oregon.

Aaron: I grew up skating my hometown park, and skating with homies that I grew up with. But Portland has a pretty good scene going on—a lot of  underground people. Mikey Chin is from out of there. Brent Atchley is from up there. The scene is pretty mellow. Not too many people leave Portland. They stay up there, and keep it pretty mellow. It’s got a pretty good scene going on. It’s getting bigger. 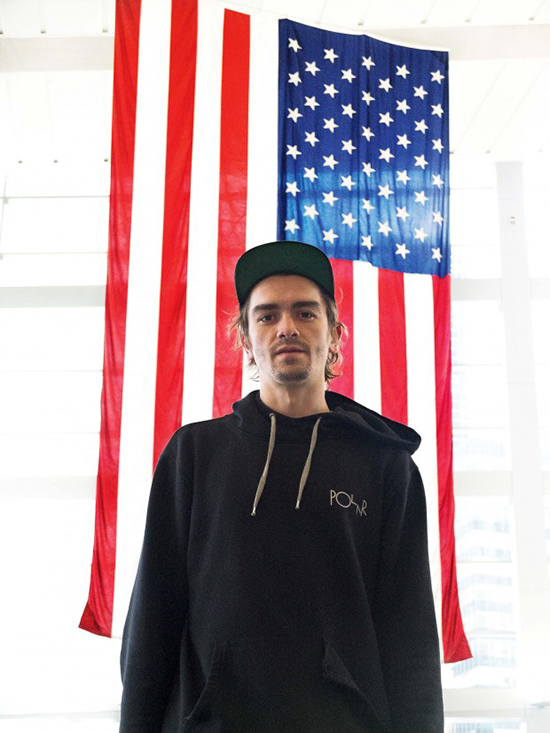 48 Blocks: What was it like coming down to SF from Oregon?

Aaron: It took a minute to get used to, just learning how the city is on a grid and how to get from one place to another without using public transit. Pretty much just figuring the city out was the most difficult part, and finding a place to live. Getting a job was easy. Finding a place to live was a lot harder.

48 Blocks: What are you doing for work?

Aaron: I work at a private high school across from City College. I just looked it up on Craigslist. My employer now knew my boss from my previous job. So it was a piece of cake. I just walked right in. My homie Waylon [Bone] works there as well. He films a lot.

48 Blocks: You said finding a place to live was difficult. Talk about that, and what you had to go through.

Aaron: When I first moved here I went and stayed at the Green Tortoise hostel for about three weeks. I went from there to Leavenworth and O’Farrell in a residence hotel. I lived there for like a month. From there I moved to the Sunset, and lived in a Garage for a year and a half. Now I live in the TL again on Hyde and Ellis.

48 Blocks: You’re skating for Blood Wizard. Were you sponsored before them?

Aaron: I started riding for them like three months ago. Before that, when I first moved to the city, I was getting Plan B flow and Silver flow for a minute. The recession hit, and I got kicked off. And one of my homie’s Elliot that was getting flow got kicked off. Pretty much all the flow kids got kicked off. But it’s all good. It’s all love. When I moved here, I met this dude Toad. He started hooking me up with boards.

48 Blocks: Who else do you skate for?

48 Blocks: You just had a part in the Low Card video. Do you have any other new projects in the works?

Aaron: We just finished the Cruz promo, and we’re going to film for a year to make the actual Cruz video. Other than that, just filming with Waylon, and working on The Boneyard whenever that comes out. I just want to keep filming and shooting photos. 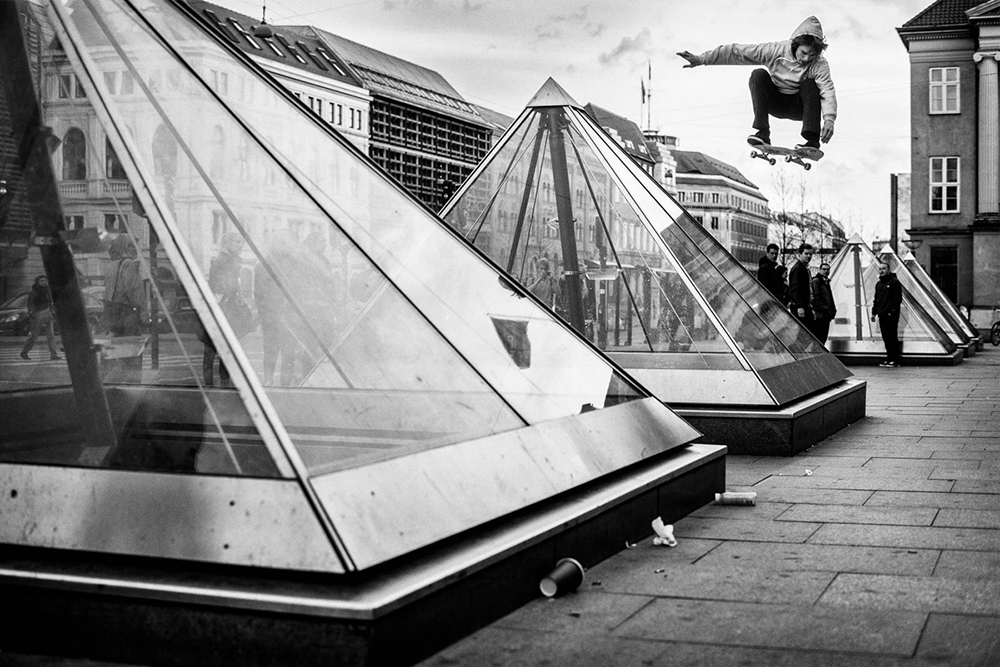 48 Blocks: I heard you have over an hour’s worth off footage. How do you go about stacking so many clips?

Aaron:  Definitely premeditating things doesn’t work very well. It goes both ways. There’s times when I want to film something. But there’s times that I’ll go out with no idea, and get five clips that day. Then there’s the days when I have ten things on my mind, and I don’t get a single thing. It’s just hit or miss. It just depends on how the day goes. Generally, just being out there skating, and always having the camera helps.

48 Blocks: You do a lot of street lines at spots that most people wouldn’t skate, or maybe wouldn’t even think off to skate. Have you always had that eye?

Aaron: I would definitely say that living in SF, there’s like twenty spots that are the known spots that everyone skates or has skated. There’s this huge list of what’s been done. Then you go and look at all the stuff that no one looks at. They say it’s a bust or something. But you just go for it. Just pushing around the Financial District, you have to have a unique eye and try to think outside of the box. I just wanna have stuff that looks original. I’ve seen so many spots here that I’ve never seen anyone skate. It kind of inspired me to just want to progress into skating everything here.

48 Blocks: That no comply 180 down the stairs onto the block at Union Square was pretty unique. I don’t think most people would think to try that trick there. Obviously there’s the slam factor. What were you thinking when you were going for that?

Aaron:  I’ve always just no complied down stairs. I figured that spot was pretty good for it because of its set-up—going down and landing on top of the block. And then, dropping off really quickly switch. I don’t know. I just thought it was a good spot for it. I’ve always wanted to no comply a gap or something big. So I figured that was a good place for it.

48 Blocks: How many tries did it take? Obviously, at Union you don’t get very many. 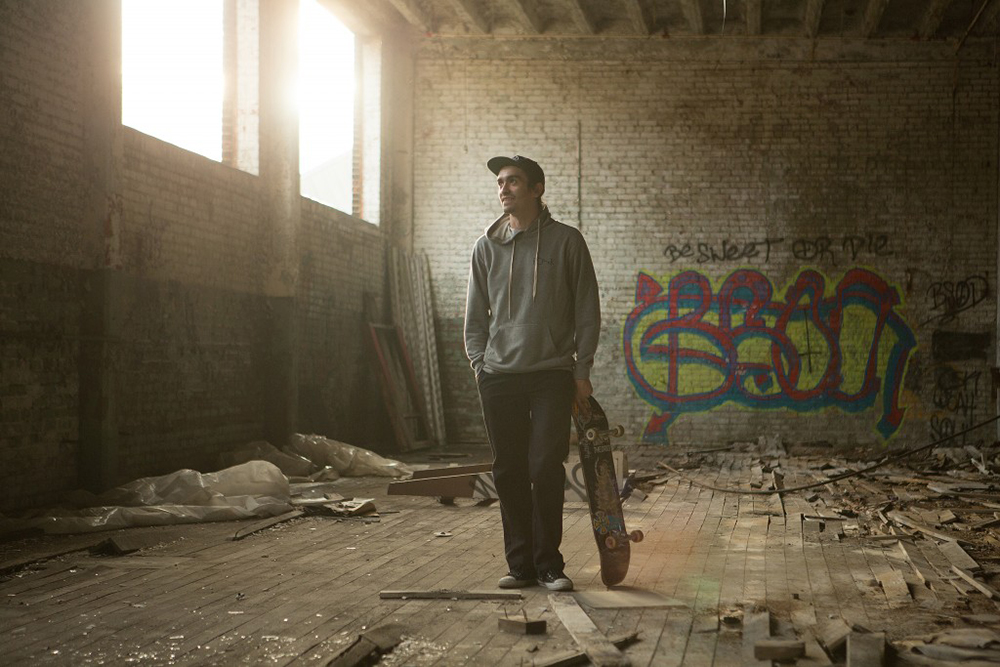 Aaron: That day was pretty good. We got like ten or fifteen tries. That’s actually pretty good for there. You usually get like three or four.

48 Blocks: Being that you’re more of a spot seeker kind of skater, what kind of terrain have you been searching out lately?

Aaron: SOMA, I just like the look of it. The footage looks cool. It makes it look like the East Coast. That and the Financial District, just trying to find spots that haven’t really been skated that have a unique look to it. Mainly just Downtown, I come downtown every day. I don’t cruise out to the Avenues too often. I’d like to, but Downtown’s just much more accessible. And I like the look. And I like the feel being around all the people. 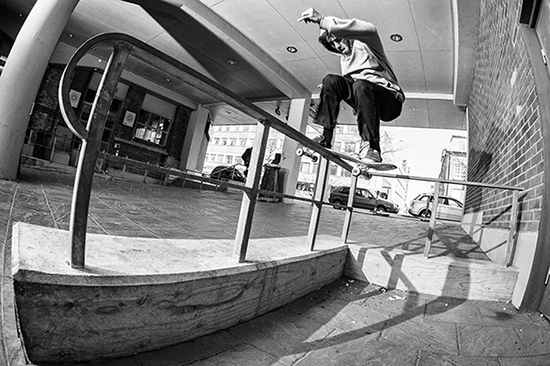 48 Blocks: Have you been traveling at all since you moved to California?

Aaron: I’ve kept it pretty local. I go home to Oregon every couple of months for a week or two. Other than that, I went to New York last summer for two weeks. I plan to go this summer again for like a month or so. I want to hit up Chicago. A couple of my friends live out there. Hopefully, I’ll go to San Diego sometime. I’ve never been out there. That would be cool.

48 Blocks: What advice would you give to a kid that was contemplating moving to San Francisco?

Aaron: Line up a place to live, and a job always helps. Money saved is good. I came here with $1700, and spent it in two weeks. This place is expensive. Money and a place to live for sure.